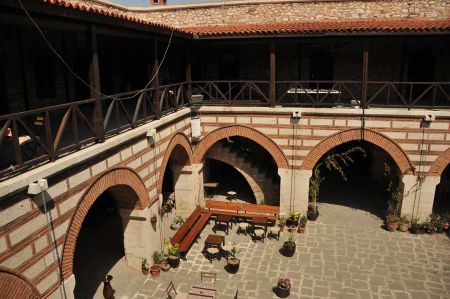 On the way to Çanakkale, we had passed the previously unknown place Menemen several times before already, which seemed neither to be particularly inviting as a modern town along the main road nor showing any special features.

The invitation of the pottery union of Menemen should now give us the opportunity to revise this perhaps hasty verdict. We are still really grateful to the interestingly designed tour through the city by Mr. Ertan Saruhan, especially since he could also offer insight views into some of the otherwise almost closed treasures of the city of Menemen. But more about that later.

Menemen - a tour through the town and its traditional pottering

First, we went through some narrow streets to a larger free space in the center, which is used as a parking lot. A little later we passed a door from early Ottoman time, which could show interesting ornaments in the doorway. Just a short time later we reached the Ottoman caravanserai, which is to be extended to the cultural center of Menemen in small steps. A very good approach, which can also inspire the embryonic tourism in the region, especially as the western border to Izmir with the coast to the gulf used as huge area for salt production from the sea. There are numerous birds nesting in these areas, including flamingos, so this area is called bird paradise (İzmir Kuş Cenneti). The city of Menemen is located on the left bank of the river Gediz, which flows into the Gulf of Izmir.

Menemen was first documented in the late 13th or beginning of 14th century by the scholar, poet and writer Georgios Pachymeres, who records in his notes that the Tourkoi, the Turkish people, had moved to the Mainomenou kampos which can be translated as Menemen. Georgios Pachymeres was born in Nicaea in 1242, where his father had fled to in 1204, after the conquest of Constantinople.

Georgios Pachymeres returned to Constantinople in 1261, where he was ordained a priest. Later, Pachymeres studied law and taught at the Hagia Sophia College. Despite his opposition to the unification of the Catholic and Orthodox Church, he maintained a certain neutrality in his writings, which dealt with the dispute between Michael VIII and Andronikos II. He also worked in other fields of science: he created a collection of writings of Aristotle, and produced manuals on astronomy, mathematics and music. An equally important compendium was a compilation of thirteen books (Syngraphikai historiai), all of which deal with Byzantine history and are a continuation of Georgios Akropolites. Georgios Pachymeres died in Constantinople in 1310.

The area around Menemen at that time was ruled by Saruchanid, until it changed to the Ottoman Empire in the reign of Sultan Murad I (1319-1389). Until so-called population exchange under the provisions of the Treaty of Lausanne in 1923, 4.683 Greeks and 3.606 Muslims lived in the city of Menemen, while Muslims were the majority in the district (17,261 Muslims, 7,195 Greeks). Even today the traces of the Greeks can be seen in many streets of the city. Our tour took us to the ruins of typical Greek houses as well as to renovated houses of the same origin. We were also proudly shown a recently restored church, which had hardly been finished yet, had been damaged by eternity. Broken window panes clearly set vandalism. Thus, tolerance, acceptance and learning from the events of the past does not yet appear to have been reached everywhere in the population in Menemen.

Only a little later we should get to know an example of an incident of Islamic fanatics when Ertan Saruhan led us to a memorial center in the city, which is guarded almost like a military base by friendly and cautiously explaining soldiers. In the founding years of the Turkish Republic, Menemen was suddenly and unexpectedly get known when the Turkish teacher and reserve officer Mustafa Fehmi Kubilay was murdered by Islamic fanatics. In the still young Turkish history, the event, marked with the Kubilay or Menemen event (Turkish Kubilay Olayı), is still deeply rooted in the collective memory of society.

Kubilay was born in Kozan in 1906, near the present border with Greece. His family had migrated from Crete in 1902 and later settled in Izmir. His name was indeed Mustafa Fehmi. He completed his school education in Aydın from 1913-1919. Afterwards, he began an apprenticeship as a tailor and during the apprenticeship he passed the entrance examination for the teacher training in Antalya. He completed his training as a teacher in 1926. During his training Mustafa Fehmi took the name Kubilay. He followed the widespread tradition of acquiring the name of a well-known Turk from pre-Islamic times. Kubilay first worked in Aydın as a teacher. Later he worked at the Zafer Elementary School in Menemen.

In Menemen, Kubilay was attacked by a religiously motivated uprising against the 1923 new government initiated by Mustafa Kemal Atatürk ending in the Republic of Turkey and then beheaded with a saw. Two more people were killed in the events. The perpetrators were religious fanatics. They were led by a dervish named Mehmet, who previously had called to the Mehdi and said he wanted to protect the religion. Mehmet was associated with the well-known Nakşibendi Sheikh Esat Efendi from Istanbul.

The Atatürk government proclaimed the state of emergency and arrested more than 2,000 followers. A total of 105 people were brought to a military tribunal. The court ordered 37 death sentences, 28 of which were executed. In secular circles of Turkey, Kubilay is still today regarded as a victim of religious fanaticism. The army annually celebrates a memorial service in honor of his death on 23 December 1930 in Menemen.

By the help of this story, which was so far unknown to us, we gained a completely new impression of this Turkish city, which still contains further treasures. Very slowly people getting used to the idea that history offers possibilities for urban development when buildings and institutions, traditions and customs, craftsmanship and music are given the opportunity to develop.
A cultural meeting with the participation of local artisans, involving local artists and musicians, could lead to great progress in the development of this city. We have been allowed to meet with some open ears.