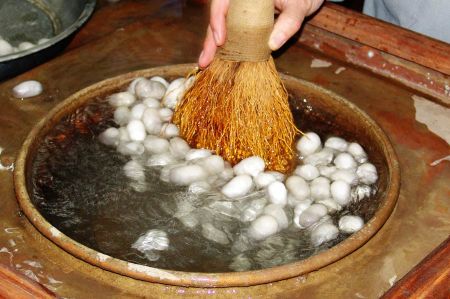 Carpet weaving craft, whose miniature I had woven during my school time in a very simple way and I still remember how much time it had taken, has been able to maintain its existence until today.

Even though it is not known when and where the weaving technique for Kilims had first begun, without a doubt, carpet weaving craft had started in Central Asia in general context. The tribes, which had lived in that area and were exposed to violent weather conditions, had started to use angora (goat) wool in order to isolate their tents. The flat weaving technique was used for the first time to make nomadic tents more comfortable. And then first knot technique appeared.

Turkish carpets, whether they are knotted or flat weaved, are the most perfect forms of craft created by Turks. Their rich colors, warm tones, exceptional weavings and traditional motifs have made the Turkish carpets famous around the world for centuries.

Thin carpet types, which are made with flaw weaving technique, are called “rugs”. Even though the techniques and motifs used in the rugs vary according to regions, when we wish to learn the age of a rug, it is understood that techniques and motifs are quite similar. In this case, the yarn and colors which are used help us to determine an approximate date, however synthetic paints have entered the Turkish market in 1880’s. Rugs, which tell us stories from the past with their patterns, adorn each corner of our houses. Whenever talking about the asserted value of a carpet, you need to be an expert to understand. Not the number of knots or the place of origin is so much important than the unique seize combined with the material and the color.

The carpet shops in Turkey are not only big stores where magnificent and traditional Turkish carpets are located, but also carpet education and culture centers. In these workshops, generally double-knotted Turkish weaving technique is used. We have learnt from a carpet workshop in Avanos that this technique is only used in our country and it allows the weaving to be more durable and secure.

In some of the carpet workshops in Turkey, carpet weaving courses are held. During working at the courses, there are no strict rules and weavers are free about their working hours. In other words, someone who doesn’t love to weave carpets doesn’t have anything to do in these workshops. Maybe that’s what makes the Turkish carpets so much valuable and different. Turkish women are weaving in these facilities voluntarily, their love is combined with their efforts and it is reflected on the result, thus creating very valuable works of art.

Depending on the number of knots and person who performs weaving, completing a carpet may take anywhere from 11 months to 2 and a half years. From time to time, it is possible for more than one person to work at the same carpet.

Traditional Turkish motifs and other designs created by individual designers are used on the patterns of the weavings. Some designs may be borrowed from İznik tile art or traditional folklore costumes. Sometimes, the copies of the antique carpets can be created upon obtaining a permission from the museum. Sometimes nomads offer handmade carpets which are much higher in value because they are unique in design and even they are rougher in their surface then silk carpets.

In weavings, cotton and cotton, cotton and wool, wool and wool, silk and silk combinations are used. Silk is mainly produced in Bursa, which is the best place for production. Nearly all the raw silk produced in Turkey is used in silk carpet weaving while some of it is used in textile and medical industry (catgut).

The natural dyes used in coloring the carpets have been made out of plants, animals and minerals for thousands of years. Today, chemical or natural methods can be used in dyeing.  After being collected, the plants growing naturally in the region can be used in natural dyeing. Saffron, indigo, walnut, oak and onionskin are some of the plants used in natural coloring. Tone differences are inevitable from one dyeing to another during coloring performed by natural methods. It is quite difficult to obtain the same tone for the second time. There are visible fluctuations of the color tones especially in the yarns dyed with onionskin.

As the colors and the style each village uses differ, it is not very difficult to understand from which region the carpet is obtained. Of course this applies for people knowledgeable in this matter.

As three different techniques are used in Avşar carpets, this feature distinguishes the carpet from the other regions.

Sepiolite - white gold from deep in the earth

Rose Valley - next to Ürgüp in Cappadocia