During a rescue excavation by the German Archaeological Institute in the province of Izmir, layers from the post-Paleolithic period (Epipalaeolithic) were discovered for the first time in a cave between the modern locations of Dikili and Bergama (UNESCO World Heritage Site Pergamon-Bergama).

They are overlaid by an ancient sanctuary of the Anatolian mother goddess Meter-Cybele. As an important natural monument, the place was also visited in the following Byzantine and Islamic epochs before it was forgotten.
The territory of today's Turkey has always been the site of significant developments and events at the interface between East and West. Most recently, the finds from Göbekli Tepe in the upper Mesopotamia attracted particular attention. There emerged in the 10th millennium BC First monumental architecture and sculptures. Compared to the Neolithic, in whose early phase the Göbekli Tepe belonged, the older phases of human history (Paleolithic or Paleolithic) are less well known. So far only a few sites of this time have been excavated in south and south-east Turkey. In the west of Anatolia, in the contact zone of the Aegean Sea and at the transition to Europe, however, there was a gap in the reliable evidence of the Paleolithic and its transition phases to the Neolithic. 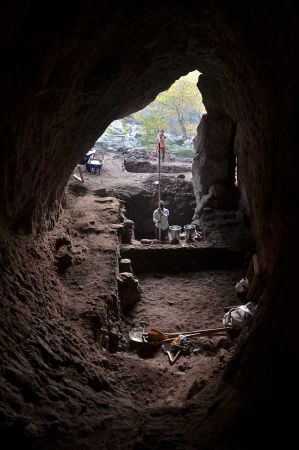 It was all the more surprising when, as part of an archaeological survey of the DAI Pergamon excavation in a cave between the modern locations of Dikili and Bergama (Pergamon), layers from the Post-Paleolithic (Epipalaeolithic) were discovered in autumn 2020, which are around 14,000 years old. The first horizons with stone tools and bones could be documented, the age of which could be precisely determined with the help of the radiocarbon method and the examination of the stone tools.
In order to research this important site in more detail and to secure the archaeological data, a six-week rescue excavation was carried out with the support of the Ministry of Culture and Tourism of Turkey and under the direction of the Bergama Museum in autumn 2021, at which, in addition to the DAI Pergamon excavation, specialists were also carried out from Ankara University were involved. The Turkish-German team was initially able to uncover younger layers in and in front of the cave, who had been affected by the use of the spectacularly situated square as a shrine to the Anatolian mother goddess Meter-Cybele from around the 6th century BC. BC up to the Roman Empire. The most recent finds include the Byzantine and Islamic periods. If one takes into account the remoteness of the place, which is difficult to reach on foot, these finds speak for a remarkable continuity in the connection of people with this extraordinary natural monument across the boundaries of epochs and religions.

Hunters and gatherers on the Aegean Sea 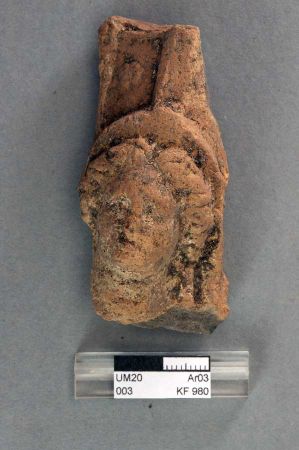 Among the remains of the sanctuary there were layers apparently from the Bronze Age (approx. 3rd-2nd millennium BC), but their precise dating and interpretation are still pending. In the Epipalaeolithic, the small cave served as a seasonal living and production facility for a group of hunters and gatherers, as evidenced by numerous animal bones as well as raw materials for tool manufacture and semi-finished pieces. The raw materials apparently served as flint stones from the bed of the river that runs directly in front of the cave. The further evaluation of the rescue excavation will, among other things, deal with the question of why the people chose this place as their camp and whether there were any indications of relations with Inner Anatolia, the Aegean Sea and mainland Greece. In later times, such relationships played an important role, as shown, among other things, by shards of red-figure ceramics from Athens. The location and finds also speak for relations to the island of Lesbos, to whose mainland possession (Peraia) the area belonged in pre-Hellenistic times.

The work takes place within the framework of the project funded by the German Research Foundation "The Transformation of the Pergamon Microregion between Hellenism and Roman Empire". In addition to the partners already mentioned, colleagues from Celal Bayar Üniversitesi Manisa, Sinop Üniversitesi, Freie Universität Berlin and the TÜBITAK Marmara Research Center were involved in the rescue excavation and its first evaluation.
Contact
Prof. Dr. Felix Pirson, Director Istanbul Department of the DAI
This email address is being protected from spambots. You need JavaScript enabled to view it.
All press photos are available for download here: