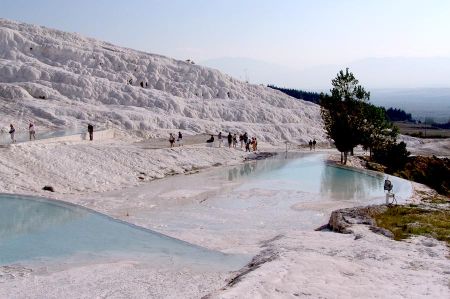 For almost every Turkey traveler, they are still the number 1 destination to visit while staying in Turkey, Pamukkale travertine terraces.

Unfortunately, structural measures in the 1960s and 1970s and huge crowds of people who were allowed to swim in the limestone pools almost led to the demise of this famous natural monument. 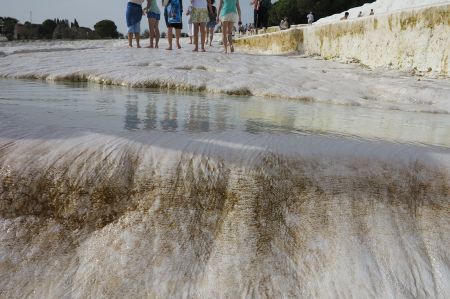 Between the lime sinter terraces and the ancient city of Hierapolis, roads and a few hotels were built in the 1960s, which even tapped into the springs of mineral-rich water and used them internally. Wastewater or process water was even returned to the system.

The Roman bath in Hierapolis can still be used by bathers today. However, if less clean spring water from Hierapolis flows down over the sinter terraces, fewer mineral deposits arrive on the surfaces. The result is the graying of the entire natural phenomenon, white became gray!

Repair and restoration of calc-sinter terraces 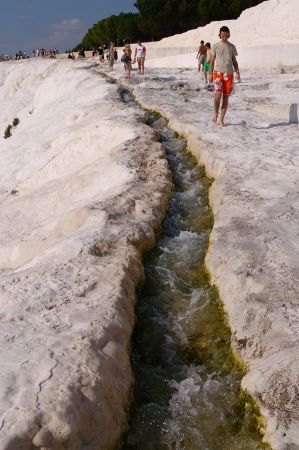 Only the massive intervention of environmental activists could end this overexploitation of the Pamukkale World Heritage Site. Even UNESCO had to get involved, which threatened to withdraw its World Heritage status. Since 1996, bathing in the shallow pools of the limestone sinter terraces with the pleasantly warm water has been a thing of the past. Access to the facility itself is also strictly regulated today.

So entering the terraces with street shoes is forbidden today. However, our observations also show that there are still unreasonable people who do not have this understanding and continue to go into the pools or leave the marked path. It was not only known since the Romans how healing the water enriched with carbonic acid and calcium carbonate is. Accordingly, one could even understand the use of this water as part of the cures in the hotels. But that, too, came to an end with the protests. Gradually the hotels were demolished and the repair and restoration of the lime sinter terraces began.

A real splendor during the night hours 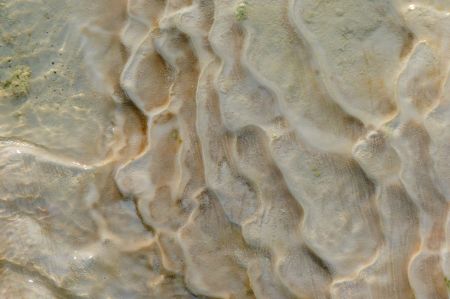 After 15 years of regeneration, the original status is far from being reached again, but the gray haze is disappearing more and more. The bathing ban and the demolition of the hotels are clearly having an effect.

Thanks to the natural lighting provided by the moon and stars, Pamukkale's terraces are also a real splendor during the night hours, which is further emphasized by indirect lighting. It's too easy to think, at least when you look at the terraces from the new Denizli bypass, that these could be snowfields. Of course this is not the case. Since tourists are usually taken to the terraces in the coaches during the day, they obviously do not have the opportunity to see this spectacular natural wonder at night.

In the third century AD, Hierapolis was "booming" 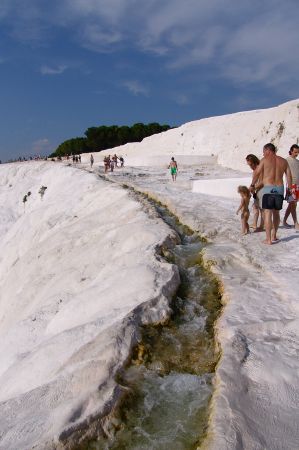 We are always amazed at how little knowledge the visitors have about the calc-sinter terraces and above all about the ancient city of Hierapolis, which is directly adjacent. Many visitors also see the terraces alone as the goal of the day tour. There are excellently preserved remains of the necropolis, the Temple of Apollo and the city gate in Hierapolis. The amphitheater, which has been restored at least in part, is also worth a visit.

Even today, the thermal baths created by the Romans are used by many visitors to bathe in the pleasantly warm water. And who can escape the attraction of swimming over or even resting on ancient columns. The Romans already knew about the healing effects of the mineral-rich water and came to Hierapolis for cures for circulatory disorders, rheumatism problems and even heart problems. In the second and third centuries AD, Hierapolis was "boom".

Bring back the bright white of the past 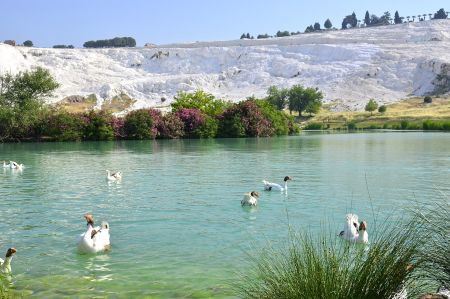 Pamukkale will probably never be as beautiful as in antiquity again. Just imagine the scenery: the snow-white travertine terraces of Pamukkale with the buildings of the ancient city of Hierapolis in the background. Since, as is well known, one should never give up hope, we will wait and see how things develop to see whether it will actually be possible to bring back the radiant white of the past.

Gymnasion - once a place of physical exercise