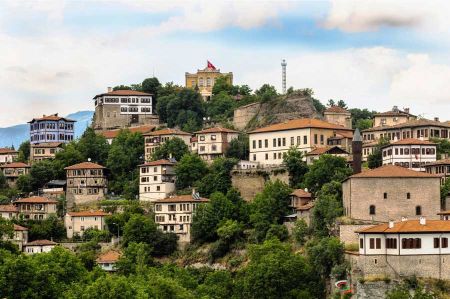 Coming from Bolu, we approached at the Safranbolu World Heritage Site, which was formerly titled Dadybra or Zalifra.

Interestingly, one of the region's main products, saffron, is said not to have given its name, although this would be obvious. There are various hypotheses about the name Safranbolu. The author Nişanyan gives the former name as Theodoroupolis and thus names a place from the time of the Eastern Roman Empire. This would have resulted in Sadrabolu and then Safranbolu. Bilge Umar believes that Dadybra was the original form. In adaptation to the Turkish way of speaking, it became Zalifre first, and later Zağfiran Borlu. In any case, it is certain that the name has nothing to do with saffron.

However, today Safranbolu is a small town in northern central Anatolia in Turkey and the capital of a district in the province of Karabük, which is located about 10 km north of the city of Karabük. Because of its cityscape determined by half-timbered houses, Safranbolu has been on the UNESCO World Heritage List since 1994.

Today Safranbolu is divided into three parts, the old city centre Çarşi Bölgesi, the modern centre Kiranköy Bölgesi and the upper town Bağlar, which once served as a kind of summer retreat. The lower and upper parts, have numerous traditional houses and are therefore one of the few places in Turkey to retain a medieval atmosphere. These houses are usually three storeys high: on a stone-built ground floor there are two more floors, which consist of plastered half-timbered houses made up of rather narrow compartments. Safranbolu looks like an open-air museum for traditional Turkish, but here strongly Greek architecture is the origin.

This oldest part of the city was originally a stage on one of the branches of the so-called Silk Road. For 700 years, Safranbolu was an important base for the east-west trade caravans. This function is still attested to today by the powerful building of the caravanserai in the middle, which is called "Cinci Han". Narrow windows and embrasures mark their fortress-like character. Inside there is a large courtyard with two floors of arcades with a fountain in the middle. Today the building houses a boutique hotel, the guest rooms of which were once used by merchants to accommodate and store their goods. The pack animals stood on the ground floor in a large hall. The manager of the caravanserai had an apartment in the tower towering above the only gate. 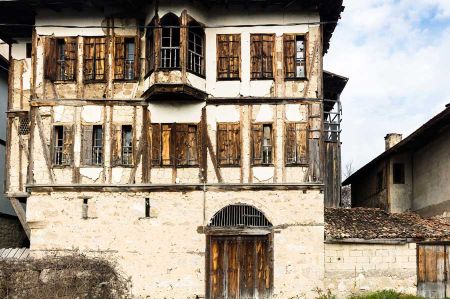 Before the great military clashes between 1919 and 1922 which the Turkish troops, under the command of Mustafa Kemal Pascha, later known as Ataturk, fought against the Greek invading army, the inhabitants of Safranbolu were largely Greeks: they settled in the Consequence of the Treaty of Lausanne of July 24, 1923 from their home to Greece.

In the immediate vicinity of the old town is the artisan district with the bazaar, where today there are modern shops that sell souvenirs as well as saffron and other medicinal herbs. Individual craftsmen belonging to the traditional blacksmith guild also work here. Forging iron is a traditional source of income in the Karabük province. Horseshoes, iron nails, grids and other metal objects are forged in the old workshops. 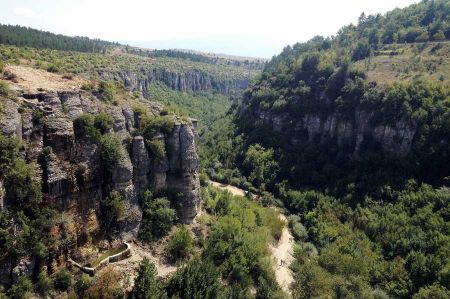 The houses around the bazaar are dominated by two mosques, the former of which was donated by the great vizier Mehmed Köprülü, who served between 1656 and 1661, after whom it bears its name; There is a Roman sundial in its forecourt. The second mosque from the late 18th century is named after its founder Izzet Mehmet Pascha (1743–1812), who was Großwezir from 1794 to 1798 and came from Safranbolu itself; its sarcophagus-like door (grave monument) can be seen in the courtyard. The interior decoration of the mosque is reminiscent of Central European Rococo. A library also belongs to the adjoining building complex. Between the two mosques stands the large building of the hammam, the Turkish bath, with several domes crowning the roof. There is also the Dağdelen Mosque (also from the 18th century) and the Kalpak or Lütfiye Mosque, which was built on an arch above the Safranbolu River and was only built in the 19th century. A little above the lower town is a classicist palace from the 19th century, which was formerly the town hall, but now houses the town museum. From here there is a beautiful panorama of the historical centre.

Attractions in the surrounding area

In the surrounding area you can visit the natural cave Bulak Mağarasi, the public part of which can be visited is around 400 meters long, while the total length is just over six kilometres. The cave extends over three levels, the middle of which is flowed through by a stream that forms a waterfall of about 15 meters in height. 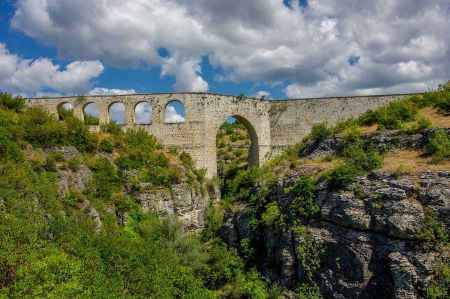 In another direction, one reaches an aqueduct from the Ottoman period, the Inceköprü Safranbolu aqueduct. It crosses a stream in a bent path that flows in a picturesque deep valley. Open air events take place here today. Su Kemeri, another Byzantine aqueduct, is located seven kilometres north of the village of Incekaya

In the wider area of ​​the city, the famous saffron crocuses are grown, today especially at Davutobasi, a village located 20 km from Safranbolu. A delicacy of saffron bolus is "Lokum", a candy based on syrup.

Some people call Safranbolu the "Rothenburg of Turkey" because of its similarity to this well known German town. If you are interested, there is a book available called "The Museum Safranbolu" which can be used as a guide when visiting the town.