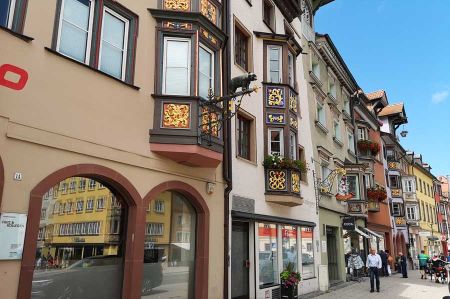 The guilds that were so important and powerful during the Middle Ages have long since passed away, but their signs in the form of symbols still exist today high above the shop windows and doors of shops and businesses, which we noticed especially when strolling through the city in Rottweil.

The medieval guilds once symbolized their professional and common understanding in the form of guild marks. These signs are partially surrounded by a blazon. In addition to guild signs in the form of a symbol, there are a variety of other guild signs, which we noticed when looking at the partially colorful wall jewelry.

With the advent of increasingly heavy and closed armor, friend and foe were no longer recognizable in the battles of the Middle Ages, so that the coat of arms often served as an identification aid. 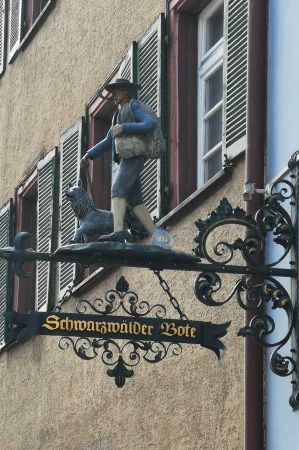 Part of this was also true of the guild signs, in order to help people who were not literate to identify a business. Guild signs are recognized as a profession by passers-by; They are often found in modified forms still on company vehicles or letterheads. They are still used today as a sign, sometimes still traditional as so-called nose plates.

At meetings of guilds and craft associations these signs are shown partly on guild flags, so often symbolized tools of the respective craft guilds are used in guild marks. In addition to these talking signs, such as a pretzel for the baker or the hammer for the blacksmith, the guilds were also recognized by other signs, such as the use of patron saints.

In Catholic areas, they were often "saints" and in the Protestant areas later more figures of ancient mythology. Like the composition of guilds, signs vary by region. The guild marks did not only have a meaning for the understanding of the respective guild inside but served as advertising or as a sign for people not powerful in reading or differently multilingual populations.

The traditional spread of the guild signs led to the fact that also for occupational fields which were developed long after the dissolution of the guilds such signs were conceived, eg. B. for electricians or the motor vehicle industry.

Guild Signs spread all over the country 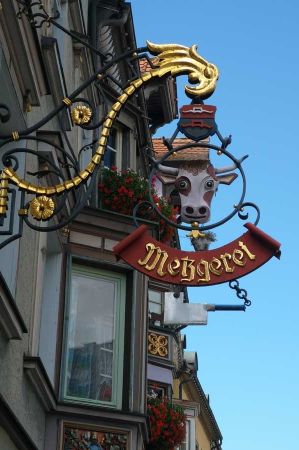 Like the families, the "guilds" had their own sign or guild emblem, consisting of the house mark of their guild house, or the sign of their trade. Other "guilds" took the picture of their patron saint as a sign or coat of arms, such as the fishing guild to Auenheim at Kehl took the image of St. Lawrence, who holds up a rust. Still others took a key, such as the merchants in Basel, the shopkeepers a saffron, the blacksmiths two hammers, a pair of pliers and a fire-red iron, the shoemaker two lions, the gardener a pitchfork, the linen weaver a red griffin, the fishermen and shipmen one Salm and an anchor as a guild sign. And these guild signs then became the "arms of the guild".

"(..) since the Middle Ages and until industrialization in the 19th century (..) the union of craftsmen in addition to the current term guild synonymous as a guild, Gaffel, Office (North German), Einung, Guild (Saxon) or coal mine called (has been).....

The current term guild synonymous as a guild 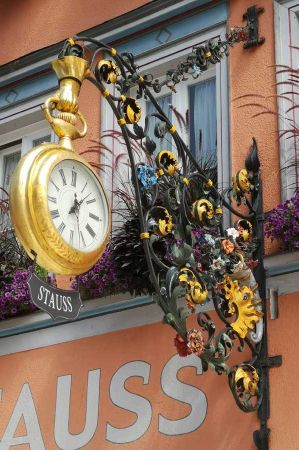 Today, the science-language agreement in Germany names the union of master craftsmen as a guild and the merger of merchants as a guild since the Middle Ages and early modern times, whereas in England guild terms refer to both. "