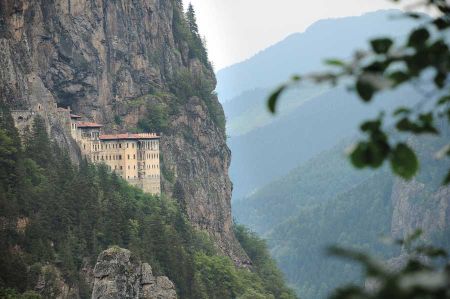 The Hagia Sophia Church of Trabzon belongs to the Group of Cloister Churches and had been built at the time of Manuel, one of the most important kings of the Trabzon Empire of Kommenos (from 1238 - 1263).

The ruins of the former chapel of Three Abscissa must be from a much older period. The building was completely changed into a mosque when Sultan Mehmed conquered Trabzon. From 1958 until 1962 Hagia Sophia Church was completely restored and changed into a museum. This was the idea of the General Director for Foundations and was carried out in cooperation with the University of Edinburgh.

Büyük Imaret and the Fatih Mosque

This mosque is part of a complex of buildings close to the Zagnos Bridge and had been built for the mother of Yavuz Sultan Selim, Ayse Gülahar Hatun. This mosque, which belongs to the group of cloister mosques, goes back to the early Ottoman period, although this church does not have an inside garden. The minaret seems to be of classical Ottoman design.

The most well known church of Trabzon can be seen in the quarter of Ortahisar. It had been built by order of Manmibalionos, the nephew of King Constantine (325 - 364) on top of the old foundations of a Roman temple.

The cathedral of Komnennen had been dedicated to the Virgin Mary. In the apses of the cathedral, built in the shape of a semicircle, there was a fresco, one metre in size, showing the head of Mother Mary with a large, golden halo. Because of this the church was sometimes called the "Goldhead" church. In 1461, Trabzon came under the control of the Ottoman Empire. They changed the church into a mosque, which is sometimes compared with the Hagia Sophia in Istanbul. 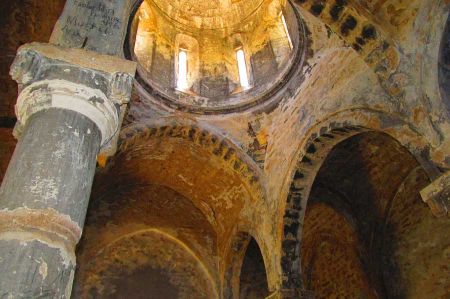 You will find this mosque, the biggest in the town, in the market quarter of Kemeralti. It had been built by order of the Trabzon governor Pasha Osman in 1839 and it shows really beautiful craftsmanship in the stonework, which had been done with a great deal of care.

The huge basilica (the year of construction is not known exactly) on Marasch Street in Trabzon was restored by King Basileos I during 884 and 885. This information is written on a Byzantine relief above the main doorway.

The Church of "Mary"

This church had been built for all the people visiting Trabzon by Sultan Abdülmecid (1869 - 1874) for worship by all religions and is still open for all today. It is richly ornamented and depicts the saints Andrew, Peter and Eugene on the western and northern walls.

The cloister is about 14 kilometres from Macka in a pine forest. The exact date of construction is unknown. People say it must be between 270 and 317. King Justinian finished all building and restoration in 565. From this point on there have been many other restorations and also some changes in construction.

After the 18th century the cloisters exerted a lot of influence on the religious, social and cultural structure of the region. The Sumela cloister should have got a lot of money from the proceeds of the Vasileon cloister, which was the richest one. The frescos on the northern wall of the cloister depict paradise, hell and doomsday. They are in very good condition and their colours are still very bright.

The Sumela Cloister was carved into a steep wall of rock about 250 metres high about 17 kilometres from Macka. A difficult, narrow, winding path leads to the cloister. But as a reward, on reaching the top there is a spectacular view down. There are many different stories about why the cloister had been built there.

This is one of the most well known ones: The two monks Barnabas and his nephew Sophrenios were the founders. They had a picture which was drawn by St. Lucas showing Mother Mary, which caused a great deal of wonder and needed a suitable frame in nice surroundings. In 385 they gathered some helpers around themselves and, while looking for a suitable spot, they were having a rest in a cave with a freshwater spring. They started digging and quickly constructed two rooms inside the cave which, after the death of the two monks in about 412, was then seen as a holy place by the Greek-Orthodox Church as well as by the Catholic Church.

After the separation of the Roman Empire into East and West, the cloister was made bigger and bigger, especially after the Byzantine King Justinian conquered Trabzon. Later, the Emperor gave a huge valuable library to the cloister.

On 26th October 1461, Trabzon was conquered by the troops of Fatih Sultan Mehmed and his Ottomans. The Sultan, as in Istanbul, did not touch the Christian buildings of Trabzon or the Sumela Cloister. The opposite happened. He actually gave additional land to some of the churches.

Yauvuz Sultan Selim was once taken ill during one of his hunting trips in the forests of Trabzon and was helped and cured by the monks of the Sumela Cloister. After he recovered and arrived back in Istanbul he granted some more land to the Cloister as well as giving four golden candlesticks.

By order of Sultan Ahmed II the interior walls, including the frescos, of the cloister were completely restored in 1710. Sultan Mahmut I provided the money for the restoration of all other frescos in the other parts. During the XIX century about 100 monks lived at Sumela Cloister. Sultan Abdülhamid donated 15 villages to the cloister.

The Cloister of Sumela is one of the oldest sacred constructions in the Black Sea region and is certainly one of the most beautiful. Many extra parts and interior changes of beautiful design, added to the cloister throughout the centuries, speak for themselves. Today the Cloister consists of two large parts. The first part is the holy part of the old cave, created by the monks Barnabas and Sophrenios, containing three springs. Four chapels were also added here.

The main holy site is covered with frescos inside and outside the building showing numerous figures and scenes from the bible. There is a stairway of 96 steps leading into the second part of the cloister with a big extra doorway. This part consists of four floors. Inside there are 72 rooms for the monks, meeting and assembly rooms, hospital and sanitary rooms as well as the library. Today most parts are in ruins but there is a memorial service on 14th August each year.