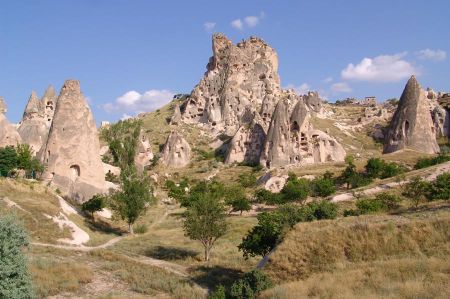 Nevşehir, the gate to Cappadocia, is a traffic key point and since a short time a market and administration centre, that was founded in 1954. The name derives from the Persian Nau (translated into

Turkish as Nev) for New and Schahr (translated into Turkish as Şehir) for City and means New City.

It covers the main part of the historical region which is known under the name Cappadocia. With the nomination of Damat Ibrahim Pahsa, which was born there, as the grand vizier, the village was expanded into the “new city = Nevşehir”.

The city has a size of 6.570 square kilometres and 280.058 inhabitants. In the administrative district of Haci Bektaş the Alaouite Pir Hacı Bektaş is buried. Today a lot of Turkomans are living in Nevşehir. The majority of the Turkomans belong to the Alaouite, while the Turks belong mainly to the Sunnite beliefs.

Especially, worth seeing is the Ibrahim Pasha-Mosque (also called Kursunlu Camii) that was built in 1724 by Sarkis Kalfa and the town Museum that offers the visitor a mixture of Turkey-typical archaeological and ethnographic antique buildings and treasures, a varied conglomeration from all eras and areas, display items from Mesopotamia and Cyprus, Terracotta-Sarcophagusses and coins of the old Romans and manuscripts of the Ottomans.

In November 2000 an official friendship agreement between Nevşehir and Pforzheim was made and at December 6th 2007 the City-Partnership treaty was concluded.