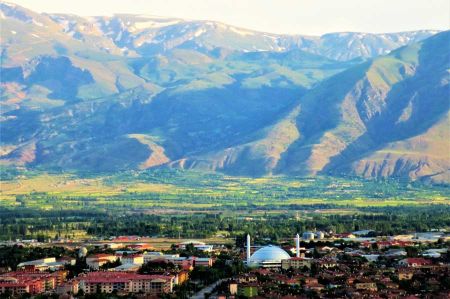 The city of Erzincan, which lies at an altitude of approx. 1200 m on the north bank of the Karasu River, is the junction of the main roads from Sivas to Erzurum and from Erzincan to Elazığ.

Erzincan is located on the highlands of Eastern Anatolia in a wide plain on the north bank of the Karasu River, which flows westward and forms a headwaters of the Euphrates. On its north side, the plain is bounded by the Esence Dağları mountain range, which is up to 3549 meters high, while the equally steep foothills of the 3462 meter high Mercan Dağları can be seen in the south. The E 80 motorway runs through the valley floor about two kilometers south of the city and connects Sivas, about 250 kilometers to the west, with Erzurum, 190 kilometers to the east. The closest small town in that direction is Tercan. After Divriği (and on to Sivas) there is a winding rail connection in the valley of the Euphrates, which is called Fırat Nehri here, but there is no direct road connection. The railway line leads eastwards via Erzurum to Kars. Doğu Ekspresi, who comes from Istanbul, runs here. The expressway to Elazığ bypasses the Mercan Mountains and branches off 35 kilometers east of the city from the Karasu Valley to the south.

About 18 kilometers south of the city by road is Ergan Dağı, a 3000 meter high mountain with a ski area that can be reached by cable car from the Yaylabaşı valley station. The intermediate station Yaylagöl can also be reached by car. There are restaurants and a hotel there.

Erzincan Airport is located eight kilometers south-east near the municipality of Yogurtlu. There are regular connections to Ankara and Istanbul, and in the summer months also to Izmir and Antalya.

Erzincan - the winters are cold and snowy 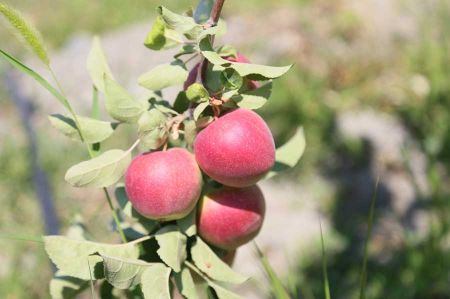 The railway line Istanbul - Ankara - Sivas - Erzurum - Kars also passes through the city. Erzincan has divided a traffic system that is very orderly by Turkish standards, similar to that in many cities in the USA, into parallel streets. From 1960 and increasingly around 1970, due to the difficult economic conditions in the region, there was a strong migration to Central Europe. The emigrants hoped for much better living conditions and believed that they would also be able to take care of the families that were often left behind from there. Today around 110,000 people live in the city, which is also the headquarters of the province of the same name.
In 1983 and 1992 there were two serious earthquakes in which large parts of the infrastructure and a large number of houses were destroyed. Official figures speak of 1,331 deaths in 1983 and in 1992, despite significant improvements in building technology, still 653 deaths. Thousands of people were left homeless.
Erzincan belongs to the continental climate zone. Summers are warm to hot and dry. Winters are cold and very snowy. Most of the precipitation falls in spring. The total annual precipitation is approx. 480 mm and the annual average temperature is 11 ° C. The coldest month is January with minus 3.3 ° C, the warmest months are July and August with an average of around 22 ° C.

Bingöl - a thousand lakes in the east!
Elbasan - After Romans and Byzantines - the Ottomans

We have 269 guests and no members online