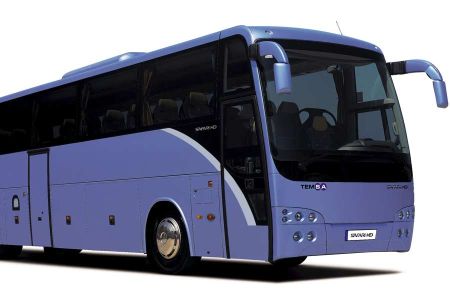 Once arrived in Turkey the question how to reach another town or place may appear suddenly. It is not the railway which is the basic transport media like in Europe. In Turkey people use an excellent bus system which is comparable to the American Greyhound system.

Modern busses of high technical standards and equipped with air conditioning, TV and wireless internet connection are on service on the long distance roads within Turkey. Prices for the distance to be covered are quite acceptable and always after 4 hours of travelling there is lunch break. On the road refreshing drinks and small service is offered. For sure there are some differences in the service of the main bus companies but in general you need to say that the standard of busses, service and staff is of high quality. For security reasons there are mostly two drivers on board and the brand marks of busses are well known brands like Mercedes, Setra, MAN, Mitsubishi and Neoplan.

The time table for departing busses is well organized in day and night trips so you will be able to reach each point of Turkey right in time. The bus terminals are of quite modern architecture and highly technical equipped. Most of the cross country companies offer online booking system in their websites and different credit card payment systems are available. The most important companies in Turkey are Metro, Ulusoy, Varan, Kamil Koc and Pamukkale. Most of them offer a shuttle service from their offices in the town centre to the main bus terminals which are mostly at the city borders. Same service is offered at the arrival terminals without any question of how big is your luggage, sometimes people take their entire household as it seems. There is an excellent service for woman travelling on their own which could be quite practicable for Europe as well. If she is booking a seat there will be immediate check if there is any other woman travelling alone. If not, the seat next to her will stay empty. A suitable solution.

We have collected a couple of cross country companies and added below together with phone numbers and websites for contact details. Please understand that we are not able to show the road maps or time tables for all the companies. Instead we decided to add Istanbul as a set point to start your travels, so we added the office numbers of the different companies as well. For sure we have listed a couple of destinations in Turkey as well, so you may easily find your route vice versa.

The Kamil Koç bus company operating from Offices 144, 145 and 146 at Istanbul's Büyük Otogar (main bus terminal) is one of Turkey's oldest and largest, running buses from Istanbul to:

The Metro Turizm bus company, one of Turkey's largest, at Offices 49 through 52 of Istanbul's main bus terminal (Büyük Otogar), sends buses from Istanbul to almost all of Turkey's major cities, towns and resorts.

Pamukkale Seyahat is one of Turkey's major bus companies, operating buses from Offices 42 through 44 of Istanbul's Büyük Otogar to:
Afyon, Ankara, Antalya, Aydin, Ayvalik, Bodrum, Bursa, Denizli (for Pamukkale), Didim (Didyma), Fethiye, Kusadasi, Izmir and other towns along the Aegean coast, Marmaris and Mugla; and to the Black Sea towns of Çarsamba, Fatsa, Samsun and Ünye.

The Ulusoy and Bosfor Turizm companies operating from Offices 127 and 129 at Istanbul's Büyük Otogar (main bus terminal), run buses from Istanbul to:

Other routes go to Greece and Europe.

Varan Turizm, at offices 15 and 16 of Istanbul's Büyük Otogar, is perhaps Turkey's best bus company, with the best-maintained vehicles, most comfort and the highest level of professional service. Varan has its own private bus terminals at Çaglayan, near Kagithane on the European side, and at Atasehir on the Asian side, from which its buses depart to:

Istanbul Seyahat, at offices 67 and 68 of Istanbul's Büyük Otogar (main bus terminal), is one of Turkey's major bus companies, with buses leaving Istanbul for towns in: Aegean and Mediterranean Turkey, including: