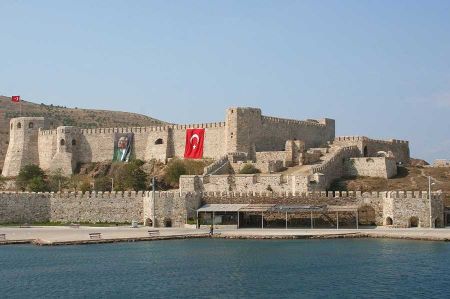 There are many islands in the immediate vicinity of the Turkish mainland, which, however, mostly belong to the territory of Greece.

A curiosity of historical development that still leads to political tensions between the two countries.

However, if you talk to the inhabitants of the different islands, they see the problems much more relaxed and can hardly understand many of the discussions (top picture Bozcaada Castle, Çanakkale, Turkey).

Very close to the Turkish province of Çanakkale is the largest Turkish island Gökçeada with 279 km², which in Greek is called Imbros, in a strategically favourable position at the entrance of the Dardanelles in the Thracian Sea. When walking around the island one often thinks that time has stopped, it is so calm and steeped all over. In a fascinating landscape with a multitude of small towns, even a castle ruin, good visibility conditions even allow a view across the sea to Troy.

The island was already populated in ancient times and was one of the oldest places of worship of Hermes. In the course of history there were frequent changes of membership, which, after the Roman Empire, brought membership to the Byzantine Empire and then to the Ottoman Empire. Between 1919 and 1923 Gökçeada, like the neighbouring island of Bozçaada, belonged to Greece for a short time, hence the name Imbros. In the Treaty of Lausanne of 1923 after the Greek-Turkish War, both islands were completely demilitarized and given to Turkey. As is well known, both countries had agreed in the contract on population exchange with forced relocation, which, however, exempted the Greeks from Gökçeada. Article 14 of the Treaty of Lausanne granted the Greeks autonomy on Gökçeada. It was planned that the island should be under Turkish sovereignty, although an independent administration with its own police force should manage the island independently. These basic regulations still apply today, although the proportion of Greeks in the population has dropped to a few hundred.

Today the island counts, with its most important city, which is also called Gökçeada as the county seat, has about 7,475 inhabitants, has three elementary schools with about 820 students, three middle schools with about 600 students, three high schools and a vocational college. As in Bozçaada, the climate is Mediterranean with dry, warm summers and damp, mild winters, and it rarely rains between May and August. Bozçaada and Gökçeada are rich in crops, especially olives and pines, which ensure good crop yields, with Bozçaada being only 36 km², much smaller than Gökçeada. The population is only 2,500 islanders, a little more in summer due to the low tourism.

It is only 16 kilometres to the Gallipoli peninsula and Troy is only 30 kilometres away, which can be reached by ferry. The inhabitants of both islands would of course like to see more tourists who could bring a little more life and thus a little more business to the islands.

We have 348 guests and no members online