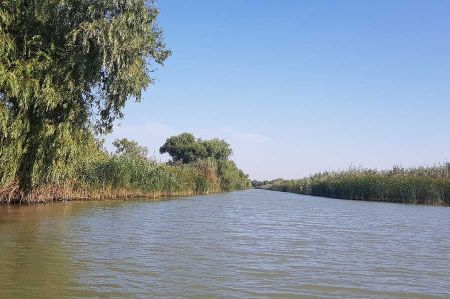 Not far from the border with Greece, about 10 kilometres away from the city of Enez near Ipsala, known to many travellers as a border crossing point, is the Lake Gala in South-West of Turkey, which is sometimes also known with the name Celtik Gölü.

Lying on the route of most migratory birds, the Gala Lake together with the Evros river delta or with the Turkish name Meriç Nehri today forms one of the largest nature reserves for water birds in the world.

The lake itself has a large number of fish species and, together with the natural swamp landscape of the area up to the Evros river, which forms the border with Greece, it offers breeding ground and food for a wide variety of bird species. Interested bird researchers will also find species that are threatened with extinction today.

With its surface of 2,369 hectares depending on the season, the Gala Lake is also home to a variety of fish species, which the increasing fishing tourism also likes to use. In the lake and in the associated river system of the Meriç there are pike (up to 5 kg), catfish (up to 60 kg), chub (up to 1.5 kg) and, among other species, tench (up to 5 kg). This more or less undisturbed and untouched natural landscape led to the entire region being protected as Nature Reserve on July 16, 1991.

Unfortunately, the border river Evros / Meriç Nehri and thus the area surrounding the Gala Lake today gives rise to disputes between Greece and Turkey, as large groups of illegal immigrants cross the river with high fatal losses and then ask for political asylum in Greece. A planned barrier wall system from the Greek side along the river meets with critical opposition from the Turks.

Ancient port city of Ainos - according to Homers Ilias

Enez was once an important ancient port and trading town in Thrace, which was once called Ainos. The writer Homer mentions Ainos in his epic "Iliad 4", as Herodotus had already written about the city. Ainos was founded around 700 BC as an Aiolic colony by Mytilene. Due to the wealth from trade and agriculture, Ainos could also become a member of the Attisch-Delischen Seebund, which, however, was associated with high taxes from the towns. During the Peloponnesian War, Ainos sent soldiers to support Athens and was thus able to become a member of the 2nd Attic League after the victorious battle in 375 BC. Until the entire Attalid Empire was inherited to the Romans in 185 BC, Ainos belonged to Pergamon for almost 200 years.

Under the Roman emperor Justinian I, the city was walled around the acropolis and expanded into a fortress. The Acropolis was later used as a construction site for the construction of a medieval castle, which had been commissioned by the Genoese Gattilusio family and which was held until the occupation by the Ottoman sultan Mehmet II in 1456.

We have 335 guests and no members online