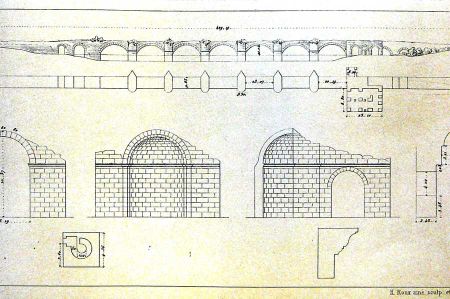 Another late Roman bridge worth seeing is in the ancient landscape of Bithynia (in North-Western Anatolia), just about five kilometres outside the city of Adapazarı across the Sangarius River.

The construction of the Sangarius Bridge goes back to the Eastern Roman Emperor Justinian (527 - 565), who thus replaced an unreliable pontoon bridge made of barges fastened together, which often tore apart when the current was too strong, making it impossible to cross the river. Since violent fighting took place with the Sassanids during the reign of Justinian, the bridge also served, perhaps even mainly, at the same time as strategic considerations for the faster deployment of troops along the Persian border. Of course, factors such as better communication between Constantinople and the Roman provinces were not without relevance.

The Sangarius Bridge, which is sometimes also called Justinian's Bridge (Justinianos Köprüsü or Beşköprü) after its builder, has the considerable dimensions of 430 meters in length, due to this fact alone it is considered by a large number of authors and poets in their works. The historian Prokop notes in his book on late Roman architecture "De Aedificiis" that the Sangarius bridge is currently under construction, which suggests the appearance of his work around 560 - 561.

Other sources document that the construction of the bridge began in the fall of 559 when Justinian returned from Thrace, where he had been exploring. With the conclusion of the peace negotiations with Persia in 562, the Sangarius Bridge was completed. This means that the almost three-year construction period of the bridge can be concluded very precisely. The former Sangarius River, now called Sakarya, has moved its bed so far east that the bridge no longer spans it today. What remains is a small outflow from Lake Sapanca, which is called Çark Deresi.

Limestone as building material for the Roman bridge

As is often the case with late Roman buildings, limestone was used for the construction of the Sangarius Bridge, which was relatively easy to work with. The entire bridge construction consists of five main arches, which have a clear width of up to 24.5 meters and thus bring the entire construction to a remarkable 429 meters long by 9.85 meters wide and approx. 10 meters high. These dimensions lead to the conclusion that the Sangarius River must once have been a mighty river and is due to that partly responsible for the still heavily debated opinion of some historians that Justinian wanted to build a channel parallel to the Bosporus that included the Sangarius River in the planning. The immense width of the bridge piers of around 6 meters, which are equipped with strong breakwaters, contributes to this discussion. In addition to the main arches, there are two further arches on the right and left with a span of about 20 meters, which in turn are framed by a total of five arches with spans between 3 and 9 meters, which should probably serve to relieve the flood. Unfortunately, arches were destroyed by construction work on a railway line. The same applies to almost all Christian insignia in the keystones of the main arches, which probably once represented Christian crosses.

It is known from older images that a triumphal arch must have stood on the western entrance to the bridge until the 19th century, which unfortunately was then destroyed. On the eastern side of the bridge there is a conche 11 meters higher and 9 meters wide, which probably contained a religious shrine. The traveller Leon de Laborde still made sketches of the bridge in 1838, which clearly show the triumphal arch as a round arch gate, so dimensions are still available: the gate opening was a proud 10.37 meters high and 6.19 meters wide, that of pillars of strength 4.35 meters wide and the stairways to the gate included.

Unfortunately, the bridge inscription is no longer recognizable, which contained an epigram by the poet Agathias as a quote from Emperor Konstantin Porphyrogenetos:

You too, Sangarios, whose impetuous course has broken through these vaults, are now flowing there, slave to a rulership, such as the proud Hesperia and the medical peoples and all barbarian hordes. Once an outrage against the ships, once untamed, you are now in the shackles of indomitable rock.

We have 658 guests and no members online