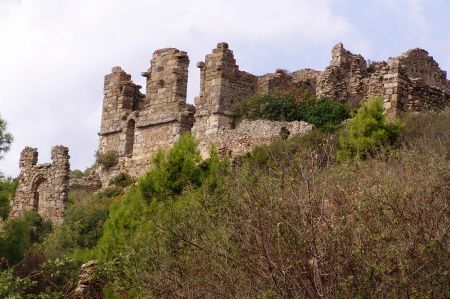 The ancient city of Syedra is situated on a hill between the present day villages of Kargıcak and Seki, about 18 kilometers south-east of Alanya and 24 kilometres north-west of Selinus, today called Gazipaşa.

Syedra was probably one of the most important cities of Roman origin in the Alanya region at the time.The center of the city is situated on a large hill. Now if you like, let's have a walk on the colonnaded street on which once the Kings and Queens used to stroll. This road is situated to the north of the temple and extends from east to west. We shall finally conclude our visit after walking along the colonnaded street and observing various ruined buildings on both sides of the road and the wall tabloids made with different colored mosaics that have lost very little from their originality after so many centuries. From the inscriptions and the coins minted in the names of Marcus Aureoles and Antonius between the years 138 and 161 found in the area, this big city is known to be the remnants of the Roman period.

The city of Syedra was founded in the 3rd century BC. The bath house is in quite good condition and the marble slabs and fallen columns on the main street show past richness. A very good cistern system indicates the huge importance of a water supply, even in those days. In one cave you can see the remains of wall paintings. Maybe the most interesting treasure from Syedra, a mosaic depicting a fisherman and fish, is shown in the garden of Alanya Museum.

Inscriptions found in the portion of the city which was located on the hill and the surrounding area prove that it is an old Roman ruin. The lintels of the monumental city gate are still standing. There are 3 pools in the city which were most likely used as water depots and on both sides of the column-lined streets there are historic structures and mosaics.

Enjoy the wonderful view from Syedra over the sea and coast with its many banana plantations. You can see a small natural harbour at the beach below Syedra. It is not difficult to imagine that this could have been the sea port for Syedra. Nowadays small boats and school classes use it for their swimming tours.

Konakli - lovely beaches next to Alanya