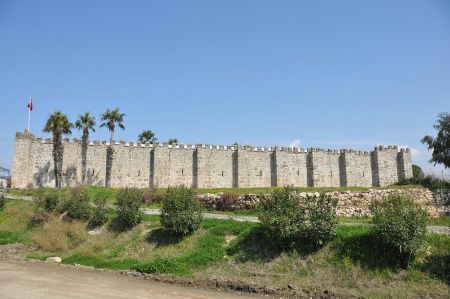 This caravanserai is on the main road 15 km west of Alanya and it is the first overnight accommodation before Alara Han on the route to Antalya. Today it is used as a restaurant and for Turkish evenings, and normally the interior is closed except on special occasions.

The building is 62 m long and 9 m wide and has 24 massive supporting towers. There is no courtyard, which is unusual. Antique stones have been reused and the northern entrance is built of porous limestones. The Arab inscription over the portal says that the building was made on orders from Giyaseddin Keyhusrev I, who completed the building in 1247, while it was started by the famous  Alaeddin Keykubad in 1236. Apart from the main entrance there is only one more entry, on the same side at the eastern end.

Through the gate one enters the middle room of the building, all 8 rooms being of the same size. The ceiling is one long vault. Each room has a window, narrow as an arrow slit, and a raised platform. Here the travellers could sit while luggage, wares and animals occupied the floor. To the east is a mihrab* (prayer niche) and an ornamental portal with an inscription which indicates that the room was used as a mosque. This is also apparent from the inscription on the outside of the entry door: “ He who believes in God and judgement day has a duty to build a mosque in God’s name.

The building of caravanserais is characteristic of the Seljuks. The Persians and Romans had inns for travellers, but the Seljuks systematized it and built large and small stations along all caravan and pilgrim routes. They were built so solidly that they  lasted many years. Many resemble small castles with thick walls. A caravanserai was more than an inn or hostelry. Here all travellers could feel safe indoors with their luggage, wares, animals, and here they could eat, drink, sleep, bathe and pray. As a rule there was also a farrier, barber, taylor, doctor, veterinary, broker, cobbler and other useful people. The distance between the caravanserais was around 30 km, which corresponded to 9 hours travel by camel.