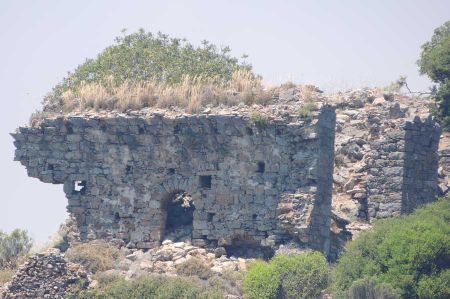 This junction should not be used as it only leads into the modern town of Macar, but does not provide access to the ancient city.

It is better to visit the ruined city of Kestros if you turn south at the eastern exit of Gazipaşa, where the median of the two-lane road ends (N36.25590 / E032.32956). A well-drivable, paved path leads between the residential and greenhouses steadily in a southerly direction up the mountain. The path ends in a bend at a height of around 220 meters (N36,24192 / E032,3340) and you have to continue on foot from there. The path is initially easy to walk on and leads below the terraces and the burial house along the eastern flank of the city hill to the south. Here the path gets worse, there is more scree and loose stones and the dense vegetation is more and more obstructive.

The somewhat bumpy path up to the ruins of Kestros 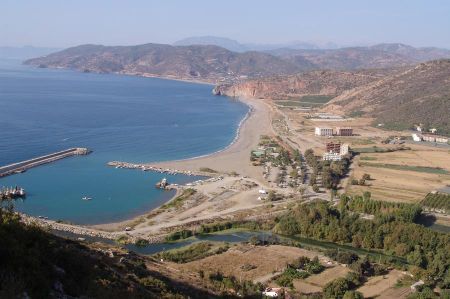 Kestros field of ruins with some highlights of ancient architecture

Kestros is located on a ridge about 380 meters high above Gazipaşa. The mountain is particularly overgrown in the ancient city area and is therefore difficult to walk on. Large and loose stone piles from former buildings increase the difficulty and also the risk of injury. Cisterns, holes in the ground and former cellar vaults further increase the risk. Accordingly, one should not undertake an ascent of Kestros alone. There is no guard or tour guide in Kestros and there is no entrance fee.

Kestros is located 6 km southeast of the Gazipaşa district, which is sometimes shown as Kilisetepe on maps. The ruins extend over an area of ​​approximately 400 square meters. According to the inscriptions, it was localized as the Cestrus Ancient City. The city walls surrounding the city extend along the plateau on the hill and are still visible in the south. On the plateau surrounded by the wall there is a wide agora, a temple believed to belong to the construction time of Vepasianus, a temple of Anthony to the south and a monumental tomb to the east of the agora. According to the inscriptions found, the city can be dated to the 1st and 2nd centuries AD.