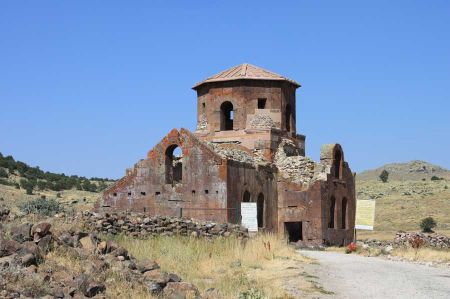 Sivrihisar, called Justianapolis in Roman times, is an Anatolian city near the motorway from Eskişehir to Ankara at the junction to Afyonkarahisar and on to Izmir.

Since a regional reform in 2014 and the appointment of Eskişehir to Büyükşehir Belediyesi, the city of Sivrihisar is identical in terms of area and population to the district of the same name and is becoming increasingly important thanks to its modern transport connections.

The ruins of the Armenian Holy Trinity Church (Kızıl Kilise) are located at the foot of the Dindymos Mountain, which towers over the city. It was continuously restored until 2015 and has been empty since then. In the city there are other houses of the medieval, traditional construction, but in different state of preservation. The Ulu Camii mosque from the 13th century and the Alemşah mausoleum are considered special sights.

Does the fool Nasredding Hodja come from Sivrihisar? 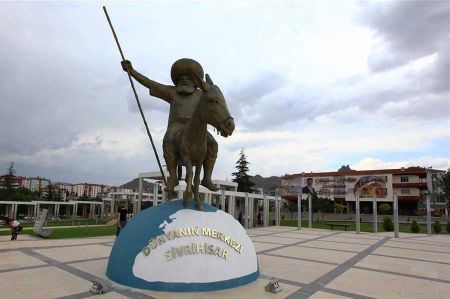 The nearby village of Hortu is said to be the birthplace of the wise fool Nasreddin Hoca. Hodscha Nasreddin is the name of the most prominent protagonist of humorous prosaic stories in the entire Turkish-Islamic influenced area from the Balkans to the Turkic peoples of Central Asia. However, its historical existence is not certain; it is assumed that he was born in the 13th / 14th century. Others say, he lived in Akşehir in southwestern Anatolia in the 17th century.
A mausoleum with his name that is located there, speaks for the southwestern Anatolian Akşehir as the place of his work.

The first anecdotes about Nasreddin Hoca in Turkish-language sources can be found in the notes of Ebülhayri Rumi and Lamiî Çelebi (d. 1531). In the popular tradition, however, the view that goes back to the Ottoman traveler Evliya Çelebi has established itself. Evliya Çelebi had written  about his trip to the presumed tomb Nasreddin Hocas in Akşehir in the 17th century and gives an anecdote in which Nasreddin Hoca appears with Timur. Attempts to historicize the person Nasreddin, however, are considered speculative. On historical foundation deeds (Vakfiye) from the years 1257 and 1266 there is a reference to a person named Nasreddīn Ḫoca, who had to appear before the Qādī. It remains unclear whether they are the same person. 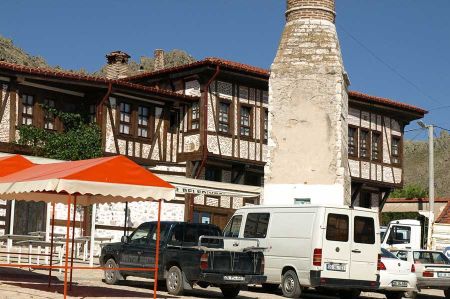 Before the widespread use of printed books, transmission was mainly oral, a tradition that has survived to this day in Turkey, among others. Hoca Nasreddin festivals take place here regularly, in which his jokes are staged. Sometimes Nasreddin played the role of a sly person in his jokes, sometimes that of a stupid person. Due to the wide geographical distribution and the long time tradition, Nasreddin was repeatedly ascribed new stories. So it was inevitable that the jokes ascribed to him were a colorful mixture of folk wisdom, cunning, but also crude or suggestive content. Some of his jokes were interpreted allegorically in dervish circles.

All sorts of witty, humorous or fluctuating stories were subsequently ascribed to him (such as that of Juha). In many stories he simply plays a joke like Klein Fritzchen, in others a kind of Till Eulenspiegel, although there are certainly similarities in the stories about Eulenspiegel (see, for example, The Sound of Money, which is comparable to Till Eulenspiegel or Grimm's fairy tales). From Italy to India he is known in many Islamic but also Christian regions and local events are attributed to him in many places. Nasraddin or Nostradin is claimed by most of the peoples of the regions mentioned above, but his ethnicity remains unknown.

Ancient city of Pessinus in the immediate vicinity 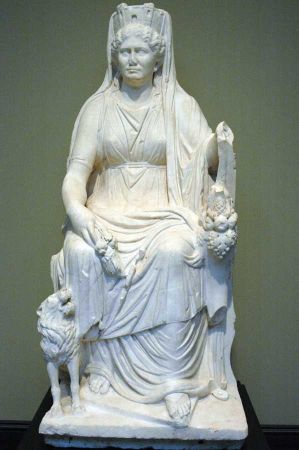 From the exit of Sivrihisar, today Ballıhisar, the archaeological city of Pessinus is about 14 km away. The archaeologist and historian John Garstang wants to equate it with the Hittite Šallapu. Pessinus is considered to be the place of origin of the Anatolian Cybele cult, which was able to spread from here. In the sanctuary there was a black meteorite, which was transported to Rome 205/4 BC. According to legend, the first temple of King Midas was built here (8th century BC). Remains of the later Hellenistic temple with large viewing stairs have been preserved. Belgian excavations have been taking place there since 1967.

The black contours of the holy mountain Dindymos are particularly impressive. Pliny the Elder gives a brief and equally vague description of the region: The center of the heartland was the mountain Tmolos, on which the capital of Sardis was, the Gygische See (today Marmara Gölü) and the surrounding fertile plain along the Hermos. Ancient Lydia bordered Caria to the south, Phrygia to the east, Mysia to the north, and extended beyond Ionia to the west. If one disregards the western border with Ionia, the description of Pliny is considered correct. Specifically, there were no clear border lines, but border zones.

The border zone in the south can be considered secure: Lydians and Karians alike settled in the Meander Valley. In the northeast, between Lydia, Mysia and Phrygia, was Mount Dindymos. The border zone between Lydia and Phrygia will probably have run along the rivers between Dindymos and Meander, the border zone between Lydia and Mysia probably along the Murat Dağı range; how far is unclear. The border between Ionia and Lydia is completely unclear, but the Sipylos seems to have been a border point. Zgusta, on the other hand, largely counts the coastal area as Lydia instead of Ionia; However, he is also interested in the cultural origins of places and less in the political and legal situation.

In the village of Ballıhisar you can find a small, quite interesting museum on contemporary history.

We have 343 guests and no members online