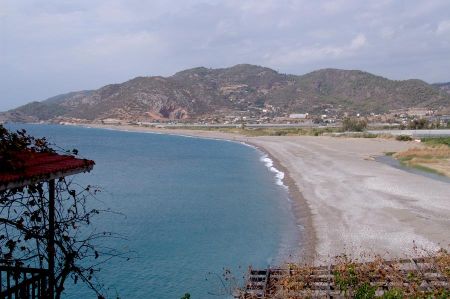 We just mentioned the clean air of the mountains and plateaus, but you don’t need to go far for dean air in Gazipaşa. The air and natural environment in die town (enter and along the coastline are exceptionally clean. There is no source of pollution in this area.

There are no factory stacks spewing black smoke and poisonous gases or industry that might pollute the environment with waste material that might harm the nature, environment and human beings. Nor there is a crowded settlement either that would cause sea pollution with waste materials. The moss-scented breeze coming in from the sea mingles with the air smelling of pine trees coming down the mountains. Sometimes it is the fragrance of pines and at other times the smell of the sea dominates the air creating a unique and refreshing climate.

Gazipasa at First Sight from the Port of Halil (Halil Limani)

There is an antique port on the border separating Alanya and Gazipasa This antique port is used today as a beautiful cove where people can go swimming. On both sides of promontory stretching into the sea, there are two beaches. The ruins of an old structure rising on the promontory above the beach known by the name The Port of Haul, looks like an old castle. But in fact, it is the ruins of an old church. The ruins of the antique town of Iotape lie on the opposite side of the road running parallel to the sea.

It is possible to have a list sight of the Gazipasa coastline from the promontory jutting into the sea here. Here, you cannot help but notice the crystal-dean sea; sand beaches stretching as far as the eye can sea and the peacefulness of the surroundings.

The major beach of Gazipasa is Selinus, which is accessible from the town center by a two-lane road. On the left hand side of the 2.5 kilometer length beach, there is an elevation on which you can see the ruins of a castle dating back the the Middle Ages. The ruins of the antique town of the Selinus sprawl over the flat land down below. The Haci Musa Stream comes down from the mountains and flows into the sea on the eastern end of the beach after meandering on the flat land. Willows and other trees line the banks of the stream in which fresh water fish are abundant.

There are numerous streams in the Gazipaşa region. Because of the decrease in water sources and also due to agricultural irrigation, water of many of these streams do not reach the sea during the summer. Haci Musa is one of the streams that do not dry off during the summer.

Sea fish like stripped mullet and sea bass come to the mouth of the stream to feed on worms and various organisms. As they go back to the sea amateur fishermen try their chance in catching some of them. Small fish just hatched from eggs out in the sea also come here to sea. And that is when we witness a great commotion in the water. Big fish eat the small ones and the anglers wait their turn to catch their share.

Before the marina was built here, the mouth of the stream was used as the mooring place for fishing boats.

There is a cave with a huge mouth at the northwest end of the Selinus Beach. The entrance of the cave is under a steep rock formation. The cave is not very deep but it is big. Local people have named it ‘The Warming Rock.” The step rock under which the cave is located is indeed red in color. It is exposed to the sun from daybreak to sunset. During the day some people go into the cave to escape from the scorching sun and cool themselves off. Once the sun is gone and the heat begins to dissipate, the rock starts emanating the warmth it has collected throughout the day. Kids, who have spent the whole day in the water, now come here shivering and warm themselves up. Well, there is no objection to grown-ups doing the same. In other words the cave functions as a natural air-conditioner.
The Selinus Beach

The Selinus Beach takes its name from the antique town nearby. The sand beach stretches as far as. The eye could see and at places it widens up to 150 meters. At one end of the beach there is a marina and at the other end there is a big cave, which is not very deep. Above the cave there is a steep hill, which might attract mountaineers. If you are not a person who gets kicks out of crawling up steep hills, you have to leave the beach and take a road leading to the hilltop from the west. There are antique ruins on top of the hill and a panoramic view of the beach down below. There is no entrance fee for the beach. There are small places for accommodation, swimming pools, restaurants and cafes on the beach organized by the local municipality. The long and wide beach provides ample and comfortable space for everybody to swim and sunbathe even during the busiest season. In addition to the municipality facilities, the hotels nearby have set up stands on the beach providing umbrellas, recliners and beach chairs for a small fee. The beach is famous for its fine sand and watching sunset here is very impressive indeed. When there is a full moon in the sky, sitting on the beach and chatting with your companions is another pleasant experience. Most of the hotels are located near the beach.

Natural Ponds and the Beach of Koru

Natural ponds of Koru are interesting formations by nature. However, human hands have also helped give shape to these ponds. These formations called yali (meaning shore) rock by the local people are produced by some sort of natural cement brought down by the waters of the stream molding with stone. Stones hewn out of these interesting formations in layers of hard rock were being used until recently in coffee grinders and flourmills. They were also used as corner stones of buildings. You can see this tuck used as a building element in the old houses as you take a walk through the old neighborhoods of the town. Seawater collects in these natural pits and they are temporarily cut off from the sea when there arc no waves. Shallow water warms up in these small ponds and they become a natural playground for the kids. The natural ponds also help clean waste material from the sea. The waves bring in waste material and deposit them here in these ponds making it easier for human beings to collect it.

In other words, they contribute to the cleanliness of the sea along the Gazipasa coastline. You just have to remove your shoes and fold your trouser up in order to walk up and down these rocks and take a close-up look at this interesting natural formation. Some also take a dip in the ponds to enjoy them more. In the shallow waters among the rock formations there are small fish. Children can be entertained here with a small fishing line.