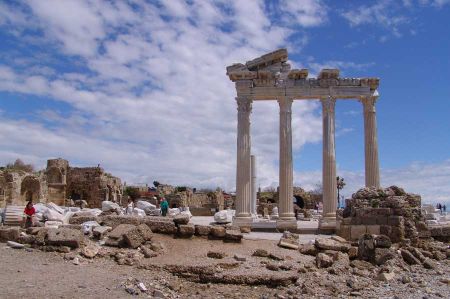 Side’s ruins outside Selimiye are best reached by using the parking area by the Roman theatre, which is the minimum you should visit. The theatre was erected in the 2nd century BC on top of a former Greek theatre.

As the ground is rather flat the lower parts are dug into the only natural hill in the area while the remainder rests on two-storeyed vaults. The stones were taken from the sea wall. During the peaceful Roman period this wall was not needed. A 3 metres wide diazoma* separates the upper and lower parts of the semicircular theatre, which could  hold at least 15,000 people. There are 12 staircases between the seats, 29 rows in the lower part and 22 in the upper part, which also originally had 29 rows. Inside the theatre galleries and staircases lead to the top rows.

The seats for the bigwigs and guests of honour were in the middle of the upper part. Around the orchestra are the remnants of a wall, which has rendered the lower seats useless. This wall was built in late Roman time (3rd century) and was covered with watertight mortar, so that the stage could be filled with water and sea battles could be enacted. Besides, it also protected the spectators when there were animal fights and fights between animals and humans. These were the gladiators, who often attained hero status in their  - usually - short careers. But they could also be criminals, slaves or prisoners that were practically sacrificed for the entertainment of the spectators.

On the basement of the Hellenistic Theatre - Roman Theatre 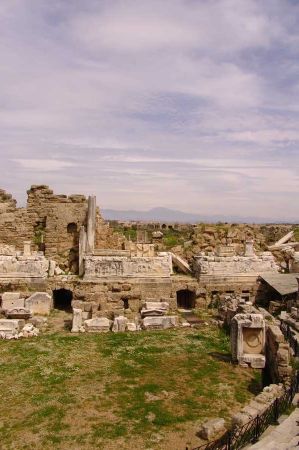 Behind the stage are the remains of the 3 storey high and 63 metres long stage building, which was decorated with columns, niches and statues of marble, today to be found in the agora. But what does remain is the fracture of a marble frieze with themes from Dionysus’ life. - also seen in other Roman theatres.  The top floor had rooms for the actors while the lower rooms, with barred windows, were reserved for the wild animals and the gladiators. In the 5th and 6th centuries the Byzantines used the theatre as a church, and remains of chapels and floor mosaics have been found. The stage building was destroyed by the Arabs in the 7th century and later collapsed during the earthquakes that dealt the death blow to the town.

Immediately south of the theatre stands the Dionysus Temple. But only a 12 by 6 metres platform is left. The Vespasian Monument is in the same location, moved here in connection with the wall that was built across the peninsula in the 4th century. The inscription says it was built in 74 AD in memory of Vespasian and his son Titus. A statue of the emperor used to be in the main niche. When it was moved it was changed into a fountain, and interestingly enough it was placed close to the public toilets. For it was Vespasian, who had introduced an unpopular tax on latrines, who said the famous words: Money does not smell. The remains of an imperial triumphal  arch is used as a gate in the new town wall, and the road today still goes through there. Between the triumphal arch and the Byzantine baths (museum) is a nymphaeum and behind it, where the aqueduct ended, was the lar-gest cistern in the town. 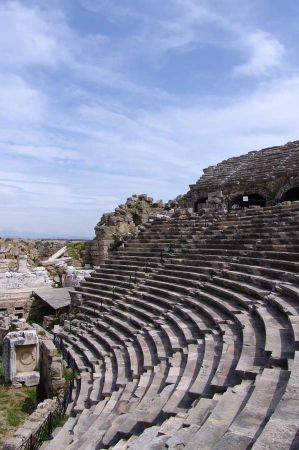 In connection with the theatre and immediately to the east of it there is the square 92 by 92 metres Imperial Agora*, the town’s commercial and cultural centre where a three pronged gate used to open up to the columned street. Several of the marbled statues from the surrounding columned street can still be seen, and behind them are remains of shops, especially at the north end. The columns of the agora are from the same period as the columns of the main street, from the 2nd century AD.

In the north western corner of the agora and integrated into the theatre stage you can still see the vaulted semicircular  room where the public toilets were. There were 24 marbled toilets with wooden partitions and sewerage, and in front of the toilets is the canal that provided running water for the visitors.

In the 65 by 65 m large agora square and a little off the centre you can see a round  platform that originally had 12 columns and a cone shaped roof. This is the Fortu-na* Temple, dedicated to the goddess of fortune, destiny and commerce. The building is depicted on coins with a pomegranate as a crown on the roof. Originally it was decorated with the 12 signs of the zodiac. They disappeared in the 19th century, probably reused in another building or as part of a  private collection.

Public Toilets of Side - Roman culture but collecting tax 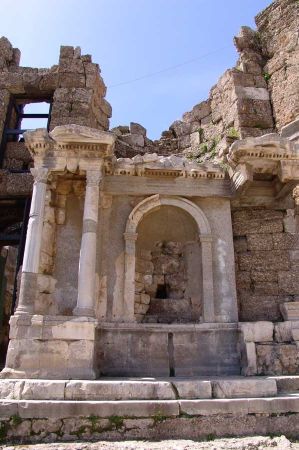 From the Imperial Agora a road leads east along the inner town wall, hurriedly built of reused materials in the 4th century, to another agora, the State Agora, square as well and surrounded by Ionian colonnades. The high platform in the middle was previously believed to be used to exhibit slaves, but archaeologists now are of the opinion that it stems from Byzantine times when the slave trade had ceased. In the east end is a large columned building with 3 halls, presumably a library or a palace. The building originally had 2 storeys, and the middle room, the imperial hall, was richly decorated with statues of Greek gods and a statue of Emperor Antony Pius (138-161). A few are preserved and exhibited in the museum. The 2 side rooms have niches that were used as book shelves, and they were given a new mosaic floor in Byzantine time.

In the dunes north of the State Agora are the ruins of a big basilica* church with a transept and south of it is the bishop’s palace and a little church (to the west). They go back to the 5th and 6th century.

The town wall to the east on the landside is better preserved than the coast wall around Selimiye. In several places it still has its 3 storeys with the ramparts as the third storey. There are two gates, built in the Hellenistic period in the 3rd century BC when they did not use mortar to join together the ashlars.

City walls and city gates - Roman monuments in Side 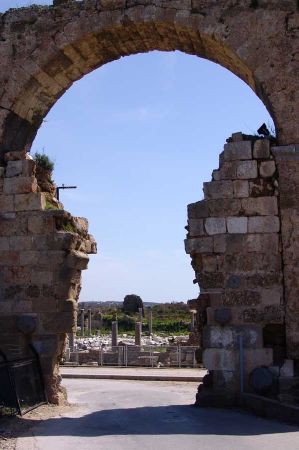 The westernmost gate is the main gate where today’s road enters and where the other large parking area is situated. The gate is flanked with 2 square towers through which you enter a horseshoe shaped square. As in another ancient town,  Perge, this defensive construction was richly decorated with niches, co-lumns and statues and made into a ceremonial square in the 2nd century, giving visitors a beautiful first impression of the town. The east gate also has two towers, but a rectangular square with niches and a water basin.  Weapons reliefs found here depict probably spoils from the Pergamon king’s attempt to conquer the town in the 2nd century.

Outside the main gate stands a monumental fountain, nymphaeum*, with rich decorations and niches. The water came from the nearby aqueduct. The original fountain from the 2nd century AD was 20 metres high, 52 metres long and 4 metres wide and covered in marble that was decorated with plant and geometrical motifs, and there were several statues. The niches are formed as sea shells and were surrounded by Corinthian columns. The area in front was surrounded by stone benches.

From the main gate the columned main street goes to the agora and the theatre, and from here the street used  to continue to the Men and Apollo and Athena temples. Today the 250 metres long street to the theatre is asphalted and is still used as the main thoroughfare. Along this street there are remains of shops, and this is where the main buildings and squares were. Excavations have discovered a perfect sewerage system under the cobbled stones. A few rich houses from the 2nd and 1st centuries BC have been excavated east of the agora. They were atrium houses in 2 storeys with rooms and toilet  around the yard and fountain in the yard. Another columned street went from the main gate south east to the basilica church and the bishop’s palace, but only the first part has been excavated. 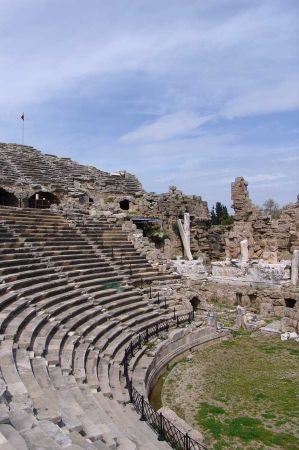 West of the columned street are the remains of the aqueduct that brought enormous masses of water to the town’s baths, cisterns, fountains, dwelling houses and to the theatre. The aqueduct ends in a large cistern by the triumphal arch. The water came from a source from the Manavgat River (then called Melas) and ran in a 32 km long pipe, the remains of which can still be seen north of Manavgat. In some places it is 2 storeys high and spans valleys, in other places it cuts its way through cliffs. The town was very dependent on the aqueduct and was vulnerable in a siege where the enemy cut off the water supply. The aqueduct was built in the 2nd century AD.
Inscriptions found in the town show that the town was divided into quarters named after characteristic buildings, not all of which have been identified.  The area north of the columned street was The Great Gate Quarter and the bishop’s area was The Great Factory Quarter. The area west of the theatre was called The Team of Four Quarter, after the chariot with the four horses on the triumphal arch by the theatre. There was also The Zeus Quarter south of the theatre.

Outside the town wall is the necropolis, buried under the sand dunes. A few sarcophagi and monuments have been found, especially on the west coast. One grave is on a platform with a temple-like building with 4 columns. Inside there are marble sarcophagi in vaulted niches and outside a decorated yard.  This grave from the 2nd century AD must have belonged to a wealthy family. In the eastern end a 2 storey Byzantine leper hospital from the 6th century has been excavated.