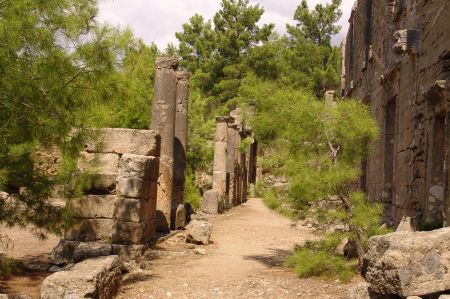 The ancient Seleukeia City which is also known as Lybre, even it is not proved is located in the borders of Bucakşeyhler (Şıhlar) village, which is 12 km away and north-westward, towards the Taurus Mountains, from Manavgat center.

The city is accessed through a thick pine forest with magnificent views into the Toros Mountains and the Mediterranean.

Seleukeia had been built by the Seleucids on the southern slopes of the Taurus Mountains and was enclosed with a 9m high wall that is now being understood that was placed between two defiles. Most of the current ruins that are scattered through a wide area belong to Hellenistic and Roman periods. These ruins prove that this settlement was, especially in the Roman period, a fairly developed city.
The archaeological excavating works in the settlement had been initiated by Professor Dr. Jale Inan and her team, in 1973 and on behalf of Istanbul University.

The most important ancient finding among those found in Seleukeia ancient City, is the mosaic known as “The Seven Sages Mosaic” and is currently exhibited in the Antalya Museum as the other ancient findings that are discovered during the excavations.

Among the ancient ruins you can see in this city, you will discover the unbelievable sense of the development, there is the thermal bath (an ancient kind of steam bath), the planned and two storied agora, the half circle shaped structure (bouleuterion or odeon) that is located on the southern edge of the agora and on the northern edge a well preserved chapel ruin.
Also at the North of the Agora there is a Temple of Apollon based on a marble platform.

At the western side of the ruins a holly cave that had been used for baptism can be found. Further west from this cave a mosaic floored Roman bath with three main sections and various rooms at the sides can be seen. Probably the most impressing view of the settlement displaying the plain and the sea as a whole with its canyons, is available here. A huge basilica floored with colored marble, is located at the southwest of this hamam.