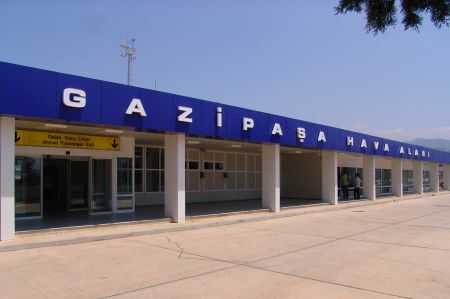 After long years and many rumours, dreams of many domestic and foreign citizens living in neighbouring regions of Alanya and Gazipaşa become real - Gazipaşa Airport opened eventually.

Airplane of General Directorate of State Airports Authority performed first test flight on May 26 in order to accomplish arrangements required in Gazipaşa airport and first landing was achieved after overall arrangements were completed. First airplane landing to the airport was welcomed by many official representatives, public of the region and press members.

Many advances have been achieved in due course which were observed by us during our 10.07.2009 dated visit where we completed many shoots. Emergency case vehicles were ready for the service, tower was ready, security equipments were arranged and installed, boarding terminals were ready to operate and finally, Duty Free shops attracted our attention.

While talking with Mr Gültekin being district governor, we learnt that airport was a development project due to which it was appreciated, in other words Gazipaşa airport was to be improved and expanded as an international airport. He stated that they aimed landing of large international flights by expanding landing runway by 500 m. Adjustments were already completed, but assistance of government was required as a result of which runway would be expanded.

In addition to regional directors, Sani Şener being President of Board of Directors of TAV company operating Istanbul, Ankara and Izmir airports contributed to official opening held on 13.07.2009. He landed to the airport by a jet to participate in his own opening celebrations. Names of airlines with whom discussions were going on regarding landing on the airport were stated (German Wings, Ryan Air, Hamburg International). Finally, president of board of directors sealed their passports and went to Saudi Arabia by plane (first official international flight). It is possible to view this airport both in international terminals and Internet under LTFG abbreviation.

During our airport visit, Atila Günkaya being director of “multivilla” company accompanied us and we discussed expectations regarding new airport, as well as its advantages and disadvantages. New airport provides connection between the region and international guests as a result of which importance of development project increases. In fact, villas have been constructed in Gazipaşa instead of tall apartments and foreign owners of these villas have settled in this region. Long-distance way from Antalya airport to Gazipaşa has prevented settlement of these foreigners to this region up to now.

According to Günkaya, this was a positive advancement which would provide more developments in Gazipaşa. Many businessmen may have the opportunity to visit their family in Gazipaşa during summers. In addition, Günkaya stated that visitors of foreign countries would have easy access to the region thanks to international connections of Istanbul, Izmir and Ankara and Gazipaşa would achieve to remain comfortable and peaceful district through regular development policy sustained up to today. Besides, he added that tall and multi-storey buildings have been prevented across coast line by overall construction plan.