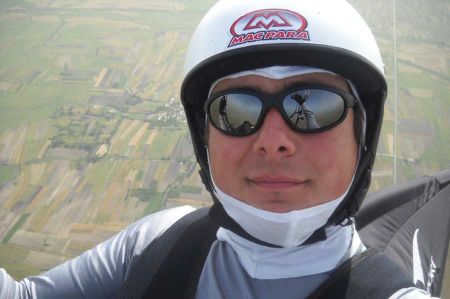 Our explorations in the area of Lake Ohrid had surprisingly let us to two take-off spaces for paragliders situated in the Galicica National Park or above Struga in the border mountains to Albania.

We never had seen active pilots flying above the lake, despite our several weeks taking exploring stay. So it was obvious to get into contact again with the pilots whom we had met during various events in Turkey to renew contact for inquiring with local pilots about a possible paragliding festival at Lake Ohrid.

Thanks to the quick reaction of Friedrich, a paragliding pilot from southern Germany, we had met him because of his participation in the XC Turkey of 2011, we learned to know Martin Javanoski a little later, who was also immediately ready to come to a first meeting to Struga. Martin himself dwells and lives in Prilep, is 25 years old and has been active flying Paragliding for 11 years, since he is 15 years old flying paramotor glider and for 3 years Hang Glider as well. He has made a name as a pilot globally by participating in various events such as XC competitions, Para Motoring Events and Siv / Acro events. We could hardly meet anyone more suitable pilot to Martin, who operates a paragliding school in Prilep, where he has now taught aspiring pilots, informed them or offered additional training courses and presentations for international pilots of areas XC and competition flying for 8 years.

So we were soon engrossed in intense talking in which we discussed the various options of a possible paragliding events, including whether competition or rather festival character. It was a really intense exchange which finally resulted in planning a paragliding festival, quite comparable to the Fethiye Air Festival in Turkey. Since both parties have significant experience in the design of such festivals, fast and first details could be discussed. Just Martins experiences in the competitions (he was invited, inter alia, to the World Air Games 2015 to Dubai, an invitation for the best 20 pilots worldwide) claimed here quickly for proper alignment. As Martin, however, is also an active competitor in the field of exact landing, we wanted to keep the possibility of adding accuracy landing into the competition.

Just beside noticed should be that Martin has also been active as a test pilot for Axis and Icaro and creatively helped to shape the development of the flight harness of Avasport.

Meanwhile, it was getting late, so we decided, to arrange a second meeting shortly later again. First official talks with the mayor's office should take place. We will continue to report.

Here are some more stations in the life of Martin Javanoskis: