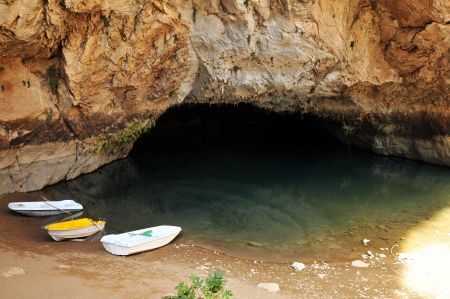 The short holiday visit of Brita and Peter with family appendix in Alanya brought, beside delicious Nuremberg bratwurst and various types of cheese as a souvenir, the idea of a short excursion into the Taurus Mountain, which should be started with a hearty breakfast at Ömer at the lower part of the artificial lake at the Manavgat river, the Manavgat Baraji.

After renting a vehicle, we went into direction of Manavgat / Oymapinar as a convoy early Saturday morning, where we arrived around 9.00 clock almost punctual to the breakfast table. Apart from fresh bread, sausage, cheese and fried egg, gazzle with cinnamon or cheese and potato, there was even mixed Tahin & Pekmez as an extension of the rich breakfast with a wonderful view on the bluish water in the lake. After nice breakfast talks and a small tour through the park, we ended the stay and drove to the control point of the water authority below the Oymapinar dam first. Right next to the road, some remains of the Roman aqueduct can be seen in the form of viaduct arches, which had been built for the water supply of the ancient Side. There is a large number of remains of this once monumental structure of more than 25 kilometers in length along with a large number of preserved tunnels and viaducts.

After an extensive visit and some architectural explanations, we went about 2 km back towards Manavgat, before we turned right to the now dried-out creek bed towards Ürünlü. Steadily the road led us up into the Taurus mountains. Several times we stopped at about 1,400 altitudes to get the wonderful impressions onto the huge upper lake of the Oymapinar and underneath the lake-like plateau lower ground areas and the Manavgat river. A breath taking view that reaches until the sea.

At noon we arrived in Ürünlü, where we drove to the village center to meet a local guide for the cave visit. The cave Altinbesik (Golden Cradle, as the local people say) itself lies somewhat deeper at the edge of the valley of the Manavgat river, coming from here flowing into the Oymapinar dam. The cave itself is completely flooded and has to be crossed with a rowing boat. Depending on the water level in the cave, the first section or at high water, the second section of the cave can be viewed from the boat. The water in the cave comes from a subterranean labyrinth system of water channels that collect the water of the surrounding mountains and lead them into the cave which have been discovered by Japanese researchers. The researchers were able to penetrate the main canal up to three kilometers, but this was completely dried out at this time of the year, the water level only allowed a ride on the first cave section this time.

Immediately after our arrival with our boat leader, he started a generator for the lighting inside the cave, then made one of the rowing boats ready and went into the cave with the first four people. About 25 minutes later, the boat reappeared from the darkness and now it was our turn. First we discovered a "bathing beach", as otherwise the sandy shore of the cave lake should have been described. A little further down in the cave, we crossed a stone bridge that connected the two sides of the cave at a height of about 15 meters. First stalagmites and stalactites could be seen, as the color of the rock material constantly changed. We then reached the end of the first grotto, where the boat could not continue because of the low water level. Slight climbing skills brought us to the rocky edge, from where we could see the entrance to the canal system at the end of the second cave. Unfortunately it was so dark in this area, because of the size of the cave even the flash unit of the camera was no longer sufficient. We spontaneously made a second visit to the cave for May when a much higher water level was expected due to the melting snow. After returning to the cave exit, the local Muhtar was already waiting for us on the shore, quickly people exchanged information with each other that some guests with camera equipment arrived. A short conversation led us to a small tour of the village of Ürünlü, which was headed by our boat leader.

At first he led us into a pretty garden with a variety of fruit trees and walnut trees, especially to the figs, which he gave us as a small meal in large numbers. We almost wanted to flee when it did not come to an end.
We have noticed the stone houses, which are made of loose stones, to be found everywhere in the village. Never before we had seen such a large number of houses of this type. The window frames, which were made of turned wood, were quite handsome, and they were showing great craftsmanship. At all, one could see a large number of outstanding wooden components, whether these were beautiful bay windows or doorways.

We ended our tour with refreshing beverages and also because of the rising thunderstorm, which for a while with a lot of buzzing attracted attention. For the return we chose the road passing Ibradi and Aksahap in the direction of Akseki, where we then turned right at the main road towards Antalya / Alanya to get back to the coast quickly. In the meantime we had noticed our lack of food, so we decided to go to the fish restaurant of Oktay on the road to Gazipasa.