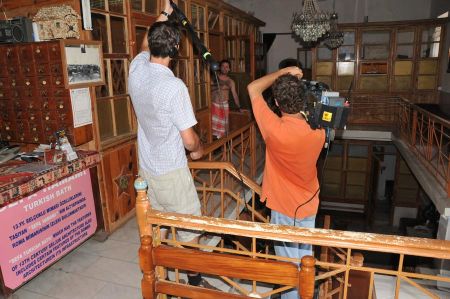 In March of this year we received a call from Germany, which came about through contacts at the Goethe Institute. On behalf of the Pro 7 series Galileo, Maximus Film GmbH was looking for places for the non-typical tourist documentation of travel destinations or tourist offers that the majority of German tourists might not find right away.

After a few phone calls to find suitable places and the accompanying persons, the probably oldest Hammam Sefa in Antalya / Kaleici and the Thursday market on Ghazi Boulevard near Bayindir Mahallesi were selected. Unfortunately, the TV team from Germany could only be there on Thursday, as a second shooting date was already scheduled for the next day in Cappadocia.

The reporter makes his own experiences 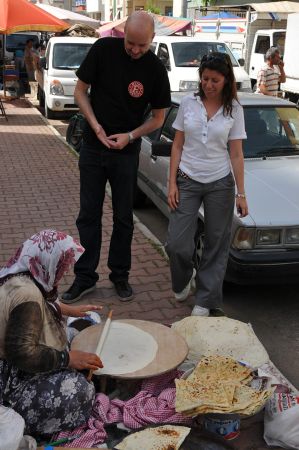 The background was the following idea: The reporter goes into the old hammam together with the person in charge of the team and explains the process and its importance for the people then and now. The process during the visit to the market should also be comparable to this. However, it was important for all possible topics that tourists basically have the opportunity to take part in or imitate the tour or the offer.

Another important approach was that the article should not have the character of a travel magazine, but that the reporter Matthias Fiedler immerses himself in the local events of the holiday destination for a short time, is shown around, discovered places and then gets the background to it from the accompanying lets person explain. The character of the Galileo format should be retained, i.e. the "reporter" meets people in the country who tell him things worth knowing and show him things worth seeing. So the reporter experiences a deliberately subjective impression of the country and its people.

Off to the Hammam in Kaleici

On Wednesday evening, June 8th, 2011, the shooting team arrived in Antalya. Since the flight was delayed due to technical problems, we were only able to meet on the spot next Thursday morning in the hope of turning off both locations. It made sense to go to the market early in the morning so that we could shoot the trading and haggling scenes there. We had prepared some of the market stallholders for the arrival of the TV crew a few days in advance, so there were no unpleasant surprises. The desired scenes were filmed quite professionally, and some special features such as the production of Gözleme were also integrated.

Around noon we went to the hammam in the old town of Kaleici. The team's particular wish here was to use the technical equipment as gently as possible and not to heat up the bathroom too much. Another focus should be the traditional washing and soaping, which should be explained in detail to the viewer.

The Ottoman Bedesten of Thessalonica