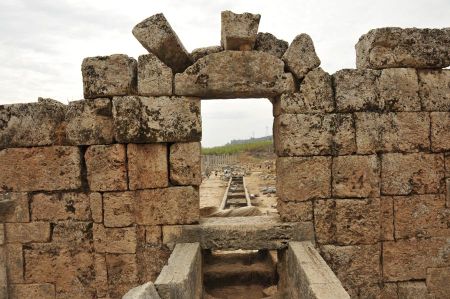 The iconic Statue of Liberty in New York Harbour was a gift from France, in 1886. But, did its inspiration originate almost 2000 years ago, in Turkey? A recent discovery in the remnants of excavation in one of the country’s most important archaeological sites is cause for speculation.

The history of Perge, situated 18km from Antalya, in the Pamphylion Plain on the Mediterranean coast and one of Turkey’s most popular vacation destinations, dates back to at least 1500 B.C., the end of the Hittite Empire’s period. Alexander the Great, king of Macedonia and one of the great Emperor conquered there in 333 B.C. But the height of the city’s power was during the Roman Empire, in the 2nd and 3rd centuries A.D. Since 1946, Perge has been carefully excavated, revealing some of the most complete and largest ancient ruins to be found in a part of the world that tells the entire story of western civilization through newly discovered antiquities, buildings, artworks and even entire towns and cities.

This in itself would be reason enough to visit Perge, and the many other ancient discoveries in Turkey but the added intrigue of Perge’s “Statue of Liberty” makes a trip there irresistible. Carved into a tall column, the three-dimensional figure bears an uncanny resemblance to New York’s own, including a crown and a torch held high and, as same as the American “lady,” a sword instead of a tablet of law. And, the similarities make sense because it turns out that Frederic Bartholdi’s inspiration for American Statue of Liberty was none other than the Roman deity, Libertas, the goddess of freedom. Could it be that Perge’s figure, with her distinctive pose and characteristics, became the model all the “Lady Liberties” down through the ages?

Americans may want to decide for themselves. In addition to a first-hand examination of the newly discovered statue, they will have the opportunity to explore the entirety of Perge’s ancient wonders, which include a large agora, or market place, that served as the centre of political and social life; a theatre that held 12,000 spectators; Roman baths; a colonnaded boulevard between Hellenistic gates, the city walls, gymnasium, numerous fountains and statues of Roman gods and the mother goddess Artemis, even a necropolis for the dead. Perge is also of interest because of its connections to early Christianity, having been famously visited by Saint Paul and St. Barnabas.

Adding to the appeal of a trip to Perge, of course, is Antalya itself. Some 500 miles of Mediterranean shoreline offer some of the cleanest beaches in Europe while the surrounding province contains ancient cities, picturesque seaside villages and exceptional natural beauty.

The city is noted for its hotels and resorts, appetizing restaurants, lively nightlife and shopping as well as year-round sporting events. A Cultural Centre, opened in 1995, is the focal point for special events, festivals and exhibitions showcasing music, theatre and other creative arts.

St. Nicholas of Myra - a Christian Character in Demre

History of Perge - long lasting story of a city