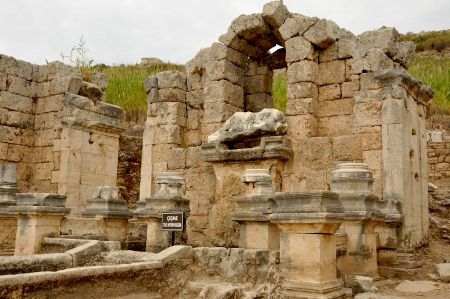 According to the Greek Writer Strabon (63 BC-19 AD) Perge was founded by Greek colonists led by Mopsos and Kalchas who came to Pamphylia after the Trojan War around 1200 BC.

These two gentlemen are responsible for many towns, so we have to take Strabo’s information with a grain of salt, but in Perge’s case it may be true as bases of statues from c 120 AD have been found by the Hellenistic gate with names of 7 heroes from the Trojan War on them:  Mopsos, Kalchas, Riksos, Labos, Machaon, Leonteus and Minyasas. But as for the other towns in the area it is likely that there was a Hittite settlement on the town hill before that. The name Perge is Luvian (Parga), meaning hill. The Hittites’ Luvian language was spoken in South Anatolia already from the 3rd millennium BC.

Perge is situated in a fertile area on a hill easy to defend and in rather safe distance from the sea. The nearby river Kestros then had access to the sea and the important trade. As for the rest of Pamphylia Perge was under Persian rule until Alexander’s arrival in 333 BC. The town surrendered willingly, maybe because the defensive walls were weak. They even provided Alexander with guides to take him and his army through the impassable Taurus Mountains so he could quickly get to Aspendos and Side, with whom Perge had bad relations. After Alexander’s death and the infighting between his generals the town came under the Seleucid Dynasty in Syria, also founded by one of Alexander’s generals, in 301 BC. A strong wall was built in the 3rd and 2nd centuries BC. The town experienced its first revival under Seleucid rule. It was then that the mathematician and astronomer Appolonius (ca 262-190 BC) grew up in the town. He was later educated at Alexandria in Egypt and was especially interested in ellipses and parabolas and other things related to geometry and tracks of planets. His theory of the tracks of planets was rediscovered in the Renaissance when both Tyge Brahe and Kepler developed it further. Together with his contemporary Archimedes he defined the figure  π (pi).

In the meantime a new empire had appeared in West Anatolia, Pergamon. After the war in 192-188 BC between the Seleucids and Pergamon, which was supported by Rome, the Seleucids had to hand over Pamphylia to Pergamon. But Perge put up a fight. In 188 BC the Romans sent a consul to Perge. When he discovered that the Seleucids had a garrison in the town he besieged it until Perge surrendered. Pergamon had to wage 2 wars in 165 and 159-158 BC to retake the town. In 133 the last king in Perga-mon died, and before that he had willed his kingdom to the Romans. So Perge became a part of the Roman Empire. But the next 100 years were rather turbulent with attacks from Cilician pirates, uprisings against the Romans and Roman civil wars. Fleecing and imposition of taxes took the shine off Perge until the Pax Romana descended on the town.

But peace time was no guarantee against fleecing. It was common practice that Roman governors used their office to aquire as much wealth as possible, before they returned to Rome after 1-2 years or were given a new office. But some were worse than others. One of the bad ones was Gaius Verres, who was later sentenced in Rome for his extortion of Sicilia and Cilicia. He was a great art collector and in 79 BC he robbed the town’s Artemis temple, including the gold on the goddess’s statue. The same year he went thieving in Aspendos.

The goddess Artemis, daughter of Zeus and sister of Apollo, was the town’s patron, appearing in many places. From the 3rd century she thrones as a statue or hunter on Hellenistic coins under the Pamphylian name Vanessa Preiia (Queen of Perge) and later under her Greek name Artemis Pergaia, and several statues and reliefs depict her. She was also goddess of fertility and protector of wild animals, children, women and the frail, and originally she was an old Anatolian mother goddess “Hellenized” by the Greek immigrants. Her temple, which according to Strabo (63 BC-19 AD) was on a hill outside town, is reported to have been big and beautiful and the statue inside covered in gold. The temple was a shrine, but it has not been found. On a hill south  east of the town a list was found with temple inventory and a cultic Artemis bust surrounded by the 12 signs in the zodiac, but no temple. Also the hill Koca Belen above the theatre has been searched, but no temple was found. Probably it was removed completely when Christianity became the state religion, or a church has been built on top.

Under the Roman rule the town experienced its glory. From the 1st to the 3rd century the town grew and much building went on. Everything went according to a town development plan that even today is impressive. The fortifications were improved and it became one of the most beautiful towns not just in Pamphy-lia but in the whole of Anatolia. At the beginning of the 2nd century the rich Plancia Magna was the greatest donor and initiator of public building. She was the daughter of the governor Plancius Varus, and the greatful citizens and the town council honoured her with the highest title of honour and with statues. She was also a priestess at the Artemis Temple and high priestess at the imperial cult. In the 3rd century Perge and Side competed about the status of most important town in Pamphylia, and both town wrote on their coins: “First in Pamphylia”.

Perge was one of the first places where Christian missionary work took place. Paul the Apostle visited the town twice around 50 AD. The strongest opponents of Christianity were the Artemis worshippers until the statues were robbed and the function was stopped under Emperor Diocletian (284-305). There are indications that the Christians for a long time identified Artemis with Virgin Mary and Apollo with Jesus. The town became a Christian centre under Constantine the Great (324-337). From East Roman time*, when Perge became a bishop’s residence, 3 basilica churches testify to the victory of Christianity. But in Byzan-tine time* the decline set in, the river sanded up and the Arab pirates attacks in the 7th century tolled the knell of Perge. The inhabitants moved out, many to Antalya, and the town died out. Earthquakes laid the town in ruins and flooding put a protective layer of earth over the rest.

In the beginning of the 20th century the locals started using the ruins as building materials. Since 1946 the town has been under excavation by Turkish archaeologists, and many finds are at the Antalya Museum.

The ancient town of Perge next to Antalya