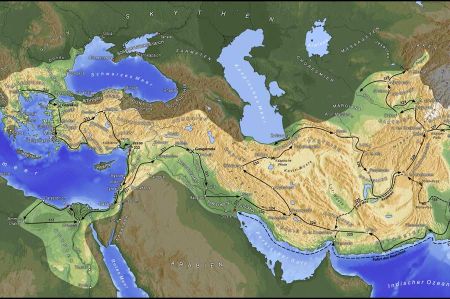 During our travels and visits of ancient cities there was always one name mentioned: Alexander the Great. Everybody learned about Alexander during history lesson at school for being the leader of one of the biggest empires ever.

Because of his military success and his cleverness in strategies Alexander became a well known figure in literature and arts during the years.

Lot of scientists are still doing research. It is not our job to work in this direction. We just want to mention couple of interesting places where we “met” with Alexander the Great. Once being there do your research for Alexander. Lot of details are still visible.

Alexander III of Macedon (356–323 BC), popularly known as Alexander the Great, was a Greek  king (basileus) of Macedon. He is the most celebrated member of the Argead Dynasty and created one of the largest empires in ancient history. Born in Pella in 356 BC, Alexander was tutored by the famed philosopher Aristotle, succeeded his father Philip II of Macedon to the throne in 336 BC after the King was assassinated and died thirteen years later at the age of 32. Although both Alexander's reign and empire were short-lived, the cultural impact of his conquests lasted for centuries. Alexander was known to be undefeated in battle and is considered one of the most successful commanders of all time. He is one of the most famous figures of antiquity, and is remembered for his tactical ability, his conquests, and for spreading Greek culture into the East (marking the beginning of Hellenistic civilization).

Philip had brought most of the city-states of mainland Greece under Macedonian hegemony, using both military and diplomatic means. Upon Philip's death, Alexander inherited a strong kingdom and an experienced army. He succeeded in being awarded the general ship of Greece and, with his authority firmly established, launched the military plans for expansion left by his father. He invaded Persian-ruled Asia Minor, and began a series of campaigns lasting ten years. Alexander repeatedly defeated the Persians in battle; marched through Syria, Egypt, Mesopotamia, Persia, and Bactria; and in the process he overthrew the Persian king Darius III and conquered the entirety of the Persian Empire. Following his desire to reach the "ends of the world and the Great Outer Sea", he invaded India, but was eventually forced to turn back by the near-mutiny of his troops.

Alexander died in Babylon in 323 BC, before realizing a series of planned campaigns that would have begun with an invasion of Arabia. In the years following Alexander's death, a series of civil wars tore his empire apart, which resulted in the formation of a number of states ruled by Macedonian aristocracy (the Diadochi). Remarkable though his conquests were, Alexander's lasting legacy was not his reign, but the cultural diffusion his conquests engendered. Alexander's importation of Greek colonists and culture to the East resulted in a new Hellenistic culture, aspects of which were still evident in the traditions of the Byzantine Empire until the mid-15th century. Alexander became legendary as a classical hero in the mold of Achilles, and features prominently in the history and myth of Greek and non-Greek cultures. He became the measure against which generals, even to this day, compare themselves, and military academies throughout the world still teach his tactical exploits

Battle of the Granicus, Siege of Halicarnassus, and Siege of Miletus

Alexander's army crossed the Hellespont in 334 BC with approximately 42,000 soldiers from Macedon and various Greek city-states, mercenaries, and feudally raised soldiers from Thrace, Paionia, and Illyria. After an initial victory against Persian forces at the Battle of the Granicus, Alexander accepted the surrender of the Persian provincial capital and treasury of Sardis and proceeded down the Ionian coast. At Halicarnassus, Alexander successfully waged the first of many sieges, eventually forcing his opponents, the mercenary captain Memnon of Rhodes and the Persian satrap of Caria, Orontobates, to withdraw by sea. Alexander left the government of Caria to Ada, who adopted Alexander as her son.

From Halicarnassus, Alexander proceeded into mountainous Lycia and the Pamphylian plain, asserting control over all coastal cities. He did this to deny the Persians naval bases. Since Alexander had no reliable fleet of his own, defeating the Persian fleet required land control. From Pamphylia onward, the coast held no major ports and so Alexander moved inland. At Termessos, Alexander humbled but did not storm the Pisidian city. At the ancient Phrygian capital of Gordium, Alexander 'undid' the hitherto unsolvable Gordian Knot, a feat said to await the future "king of Asia". According to the most vivid story, Alexander proclaimed that it did not matter how the knot was undone, and he hacked it apart with his sword.

Battle of Issus and Siege of Tyre

After spending the winter campaigning in Asia Minor, Alexander's army crossed the Cilician Gates in 333 BC, and defeated the main Persian army under the command of Darius III at the Battle of Issus in November. Darius was forced to flee the battle after his army broke, and in doing so left behind his wife, his two daughters, his mother Sisygambis, and a fabulous amount of treasure. He afterward offered a peace treaty to Alexander, the concession of the lands he had already conquered, and a ransom of 10,000 talents for his family. Alexander replied that since he was now king of Asia, it was he alone who decided territorial divisions.

Alexander proceeded to take possession of Syria, and most of the coast of the Levant. However, the following year, 332 BC, he was forced to attack Tyre, which he eventually captured after a famous siege. After the capture of Tyre, Alexander crucified all the men of military age, and sold the women and children into slavery.

While he was triumphantly campaigning north, the Thebans and Athenians rebelled once more. Alexander reacted immediately, but, while the other cities once again hesitated, Thebes decided to resist with the utmost vigor. However, the resistance was useless, as the city was razed to the ground amid great bloodshed, and its territory was divided between the other Boeotian cities. The end of Thebes cowed Athens into submission, leaving all of Greece at least outwardly at peace with Alexander.

Apollonius of Perge - Master of Mathematics