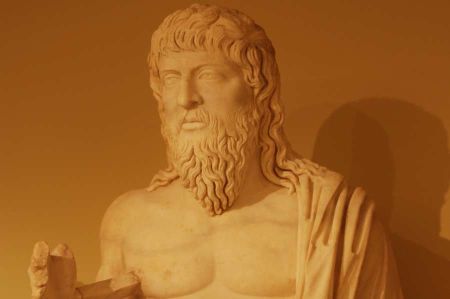 It was Apollonius who gave the ellipse, the parabola, and the hyperbola the names by which we know them. The hypothesis of eccentric orbits, or equivalently, deferent and epicycles, to explain the apparent motion of the planets and the varying speed of the Moon, are also attributed to him.

Apollonius' theorem demonstrates that the two models are equivalent given the right parameters. Ptolemy describes this theorem in the Almagest XII.1. Apollonius also researched the lunar theory, for which he is said to have been called Epsilon (ε). The crater Apollonius on the Moon is named in his honour.

The generality of Apollonius's treatment is indeed remarkable. He defines the fundamental conic property as the equivalent of the Cartesian equation applied to oblique axes—i.e., axes consisting of a diameter and the tangent at its extremity—that are obtained by cutting an oblique circular cone. The way the cone is cut does not matter. He shows that the oblique axes are only a particular case after demonstrating that the basic conic property can be expressed in the same form with reference to any new diameter and the tangent at its extremity. It is the form of the fundamental property (expressed in terms of the "application of areas") that leads him to give these curves their names: parabola, ellipse, and hyperbola.