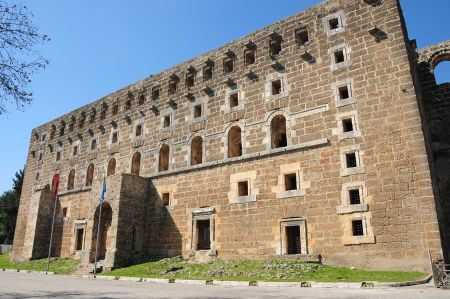 The Theatre of Aspendos was built during the second century AD and is one of the best preserved ancient theatres in the world. It offers seating for up to 20.000 visitors and is well known because of its marvellous acoustics.

Even after 2000 years the acoustics are so good that you can hear a person talking to you from the other side of the theatre even when they are talking in a normal voice. Today the Aspendos Theatre is still used for wrestling, live music concerts or dance shows. The lines of marble seats are built like the rings of an onion, in a perfect semicircle. There is an open stage and behind that the three–storey, Corinthian-style stage building. All around it are a gallery of arcades – and everything is still in excellent condition. The clear, deep–blue sky can be seen. All of this is more than 1800 years old. 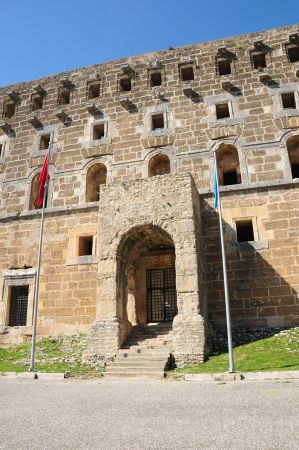 Aspendos is the best kept ancient amphitheatre in Asia. Lots of people are lost for words when they see this giant site opening up in front of them. Tour and travel guides await the visitors, amongst them Zeki, a lively, curly-haired guy from Istanbul. ‘During the 13th century the Seldjuk’s changed the theatre into a caravansaray’, he explains, ‘that’s why it is so well preserved’. His words quickly rise high up into the last and highest line of seats – as mentioned before, the acoustics are still surprisingly good.

Some famous items from this year’s programme are a show featuring Thomas Gottschalk, a German TV star, and the “Fire of Anatolia”, a world famous dance performance.

Still today, many special events like concerts or ballets can be seen at Aspendos: Pavarotti, Tarkan, La Traviata….. For these they put pads and cushion onto the marble seats, and all the ice–cream and sandwich sellers of the area turn up. 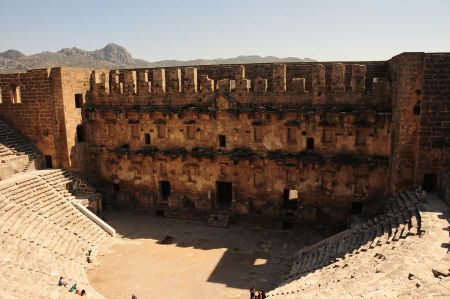 The applause can be heard until late at night echoing in the Taurus Mountains. Programmes for the season at Aspendos are available at most hotels and at lots of travel agencies. If you are interested and it fits in with your travel arrangements, you should certainly try to book tickets for one of the events in the Theatre of Aspendos, whether you like to listen to things like classical music or whether you are a fan of rock music.