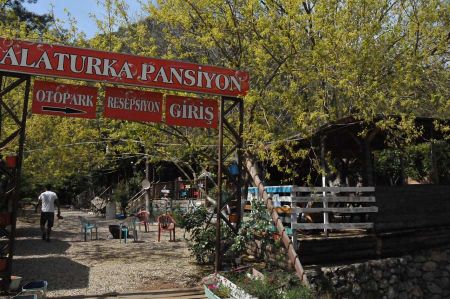 In different, international travelogues of users of the Lycian trail and backpackers we have repeatedly heard about the "tree houses" at Olympos, which are made of simple, nailed boards lodgings offering cheap accomodation.

So it was the right time for us to get an own impression of this simple accommodation way which is used by many "back packers" as a cheap place to stay. Since years Olympos is very trendy for young travelers, due to its extended sandy beach reaching until Çıralı, simple vacation without 5 star all-inclusive service. Next to it, the visit of the ancient town of Olympos should thus be connected.

With our friends Britta and Peter we were coming back from Gömbe on Uyluk Tepe (3024 meters) and after the long walk to the waterfall Ucarsu we were looking for a relaxing bed for spending the night in Olympos. For visiting the ancient site of Olympos, it can be reached by car, by turning off from the coastal road D400 at the signposted exit to the South. After about 9 km on a narrow and always turning road, you will reach the wooden village. It was already dark when we arrived at the Alaturka Inn (a coincidence in the naming with us).

Several times we had asked for direction and telephoned about time of arrival and thus our dinner was waiting ready cooked for us; a hospitable family run business. A quick look into our little wooden house, small with just two beds an bathroom but kept in a very clean way,  so immediately it convinced us that we made the right choice. Somewhat tired from hard day at Uyluk Tepe we enjoyed our dinner and were still long time busy to discuss the course of the day.

After hearty breakfast the next morning we went on the way to the ancient city of Olympos after crossing the museum gate (here is entry of 5, - TL required, cause you are passing the ancient town) to enjoy the sandy beach at the sea.

Olympos is, long time forgotten, either side of a small mostly dry creek, where the remains of a bridge can be seen that connected both parts of the town together. The remaining buildings are highly dilapidated and largely overgrown, like the small Roman theater, which has been almost entirely destroyed by an earthquake. A former lake is marshy today - here are the remains of a temple from the 2nd century AD. Notable is the necropolis with numerous tombs and inscriptions, but they do not have the typical Lycian features, more simple but with some technical features.

In addition to the remains of a Byzantine basilica on a hilltop colonization remains of the depletion of the settlement until the Middle Ages. A ruined castle above the beach testifies to the numerous commercial and military bases of the Republic of Genoa and probably dates from the 14th century. For this purpose the excavation team coming during years between 2000-2006 have exposed some sarcophagi which have substantial destruction.

Olympos was founded as a mining town at the Musa Dagh mountain south of its port Korykos who got transferred from the name of Emperor Hadrian. As an important member of the Lycian League they were powerful like Xanthos which even had 3 votes, time was the beginning of the 1st century BC. It should be mentioned, just like the nearby Phaselis, that pirates conquered the area in 77/76 BC. Publius Servilius Vatia (Isauricus) trounced them later. Olympos was famous due to its cult of Hephaestus, which can be seen in direct connection with the nearby "eternal fires" of the Chimera. In the 3rd century AD, Olympos is known as a place where Christianity won of importance and even provided a bishop called Methodius.

With increasing sun, it became increasingly warmer hourly. So we were really happy to reach at the beach. Approximately 3 kilometers wide, the beach widens until Çıralı, beautiful mountain panorama, the highlight is the Tahtali mountain with its cable car and the strong green vegetation in the background, azure like colored water of excellent quality waiting for us. Hardly no beach chairs or umbrellas disturbed the idyll, but just a Mecca for alternative travelers without any 5 star luxury, so it became popularity within the backpackers. And same with us. We will be back again.