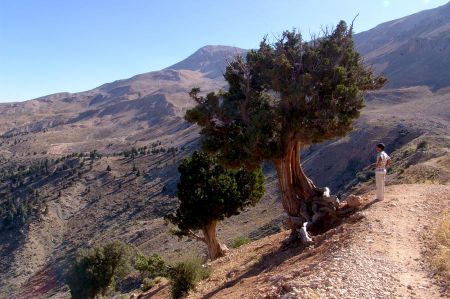 As part of our two day journey, we took off in Korkuteli direction after Termessos to reach our next target; Gömbe near Uyluk Mountain (elv.3024 m.). Many of the Turks residing along the shore relocate to mountain sides known as “uplands” in order to escape from the summer heat.

They take advantage of what the summer season offers and cultivate fruit and vegetables and raise livestock such as goats and sheep. In short, they busy themselves with profitable activities in the summer season. The village settlements at uplands mostly consist of tents, just as the nomads used to do in the past. However, one must still search a bit in order to locate such nomadic settlements due to the fact that lately, concrete and stone houses are the preference of upland dwellers.

As we entered into the settlement of Korkuteli, we felt the difference between the climactic conditions upland and low land for we were already at an altitude of 1000 meters above sea. The Korkuteli "Köfte" was the perfect antidote for the appetite we had worked up. Soon, we took a left turn after a short drive on E87 and headed off towards Elmalı.

Elmalı is a town located on a plateau at an altitude of 1050 meters above sea level. This is a settlement offering spectacular views and relief from the summer heat. The history of Elmalı goes back to antiquity. The town center is home to "Kesik Minare", one of the oldest Seljuk structures in the region. Historic buildings have mostly been protected and the double exedras that are hidden in the narrow streets of higher sections of town are an eye catcher.

On we continued on a flat but slightly uphill prairie that is devoid of any forestry and after a short drive we turned right at Düdenköy' village in the direction of Akçay, Gömbe. The landscape is distinctly greener and the passers by are overwhelmed by vast fruit orchards. The abundance of all types of apples, pears and walnuts are a testimony to the fertile character of the land. Indeed, the village of "Elmalı" (Place of Apples) is apparently named after the fruit growing activity.

Gömbe, the main upland settlement of Kaş had been a prestigious Christian diocese in antiquity. One can still see the remains of Church buildings. Rituals are traditionally held between the 5th and 7th of June; wishes and offerings are made; dervishes whirl (Sufi), and folk dances are followed by a visit to Abdal Musa museum in the Village of Teke.

Finally, we reached Gömbe. We could already discern the waterfall at the heights of Uyluk Hill. Here, I should advise the would be visitor to follow the road signs to Uçarsu waterfall and Yeşil lake. A nicely made gravel road (asphalting works are currently done) takes you to a clearing up the hill. When you reach to the clearing, a sharp right turn takes you to a small tea garden. Here, you must park your vehicle. You are now standing at an altitude of about 2000 meters above sea level and you have to walk the remaining distance to Yeşil Lake and Uçarsu Waterfall. You will be walking for about 30 minutes.

Just to make sure we are on the right track, we asked a young man who seemed to have appeared from nowhere. He was on his way to the lowland he said and was very happy when we offered him a ride down after we concluded our visit. Thus the conversation grew deeper and he mentioned of the tent village further up on the Uyluk Hill:

We pitch our tents at Subaşı Upland, which is at an altitude of about 2000 meters. The upland settlement is about 20 kilometers beyond the mountain town of Gömbe. It is known that semi-nomadic settlers of Fethiye shoreline have used this area as summer residence between July-September for hundreds of years. Women and children as well as goat and sheep herds relocate to upland when the season strikes because fresh grass is always abundant for the herds. As to the people, their priority is that summer season is not as disturbing here as it could be on shoreline. Nowadays, this tradition of relocating in summer times is enjoyed only a few farmer families. One of the reasons for the decline in the number of settlers is that many of them found jobs in the newly booming tourism industry and they do not want to leave their permanent homes on the shore.

Still, about 15 to 20 families continue to uphold the tradition of relocating to dark green pasture of the upland, which is fed by fresh water coming from many springs all around. Some of them spend the summer in the traditional tents - made of black goat wool- from the beginning of July to the end of August. Women produce cheese and yoghurt. Men sell the produce at Gömbe bazaar on Fridays.

Our next stop was the Yeşil Lake. Although the lake is inviting at the outset for a good swim, it is wise to be cautious of the swamp sections along the lake shore. Surely, water is freezing cold. However, the view is spectacular with the peak of about a kilometer height reflecting on the calm waters of the lake.

Our walk towards the waterfall continued. When looking from the dirt track, one could not see much of the location where water fell. So we decided to walk down in to the creek bed so that we could take a few good shots of the waterfall. As we descended towards the waterfall along the creek bed, we were finding it difficult to locate a suitable track. But, courage beats it all and we finally reached the bottom. The mass of water falling from great heights created a majestic view. Obviously much impressed by what she has seen, I saw my partner jumping about as if dancing to the sound of water. Having the opportunity to observe what nature is capable of offering over an again is an enchanting experience indeed.

With a fall height of 60 meters, Uçarsu Waterfall is a sacred location to visit for many Turks and especially Alevite Muslims. Here, Alevite pay homage their spiritual leader Abdal Musa. It is believed that Uçarsu Creek flows towards Gömbe in summer time and towards Fethiye in winter time as a result of a prayer by the Muslim man of cloth and thinker Abdal Musa.

As a matter of fact, today the creek begins to flow towards Gömbe in the first week of May and continues its flow in that direction until the beginning of October. It is thought that the creek runs in the direction of Fethiye in the remaining period, independent of the amount of water that flows through. Geologists have been trying to offer scientific theories about this phenomenon. It is thought that this seasonal change of direction in flow is related to frozen water masses below ground. The ice melts in May and thus the change of direction towards Gömbe.

Subsequent to this difficult climb (we had indeed underestimated the heat and lack of oxygen) we found our way down to the mountain track where Brita and Peter were waiting for us.

Upon reaching our car, our direction this time was the town of Kaş. Even the old road map we had showed a promising route in terms of the attractive geography. Of course, just as we expected, we passed many a plains with roads curling in the middle of fertile land and superb pine forests on higher ground. This was the time we spared for ourselves to make the most of nature and panorama offered. Kaş was our next stopover before we took off for Olympos, today's destination.