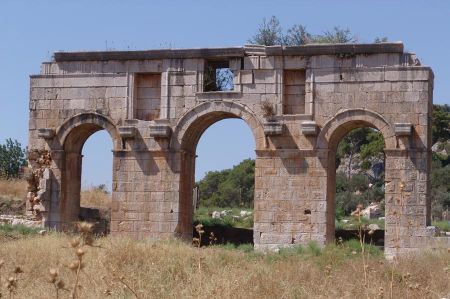 Patara is situated on the Mediterranean coast of Turkey (also called The Turquoise coast or the "Lycian Coast"). A region boasting thousands of years of history, breathtaking scenery and couple of miles of unspoiled coastline. 2000 years ago Patara was the largest and the most important sea port of the Lycian civilization.

According to mythology Apollo was born here and it is also said to be the birthplace of Santa Claus (St. Nicolas). The lighthouse that had been discovered recently is said to be the first one known on earth. The colorful ceramics in the center of the city reveal that the history of the city reaches back to 500 B.C. Besides it is being the birthplace of St. Nicholas, it was one of the most important sea port during the times of Alexander the Great. Three gated city walls, one of which leads to Patara, were constructed by the governor Modestus in 110 BC. One of the most important remnants is the theater currently buried under the sandy beaches of Patara.

Possessing a natural harbor, Patara was said to have been founded by Patarus, a son of Apollo. In ancient times Patara was noted for its temples and the Oracle of Apollo, second only next to that of Delphi. The city, with the rest of Lycia, surrendered to Alexander the Great in 333 BC. Patara is mentioned in the Bible (Acts 21:1-3) as the place where Paul of Tarsus and Luke changed ships. The city was Christianize early, and several early bishops are known; according to Le Quien. Nicholas of Myra was born at Patara in ca. 300 AC. Patara is mentioned among the Lycian bishoprics in the Acts of Councils. The Notitiae Episcopatuum mention it among the suffragans of Myra as late as the thirteenth century.The ancient parliament building set in Patara seems to change the destiny of village."If I need to give an example of a perfect confederation republic,I definitely show Lycia". Montesquieu, De L'Esprit des Lois (1748). This determination were effective in the formation of the United States Constitution,accepted in 1787.This fact is unerthened in the 1081th page of records of 1776s by saying "the best that ever was made". Essential arrangements get started to do the celebration of the United States Constitution in upcoming years at Patara ancient parliament building.

The city remained of some importance during the Byzantine Empire as a crossing point for trade and pilgrims. During the wars between the Turks and the Byzantines, the city was abandoned. The site is currently being excavated during two summer months each year by a team of Turkish archaeologists. At the end of 2007, all the sand had been cleared from the amphitheatre and some other buildings, and the columns on the main street had been partially re-erected (with facsimile capitals). The excavations have revealed masonry in remarkable condition.