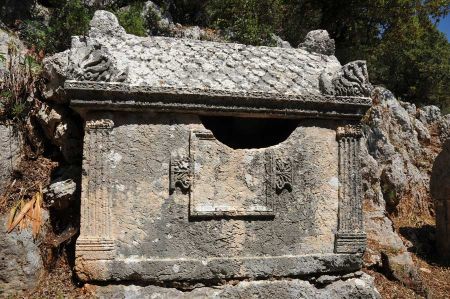 And once again, we had arranged to meet with Wolfgang Dorn and his tour group, this time in the small town Yavu near Kas to visit the ancient city Kyaneai in Lycia.

The ruins of Kyaneai lie above the village Yavu on a ridge and although there is a dust road up now, the mound should be "mastered" by foot.

So the backpack was laced, the water bottle filled and off we went. Still in place at the mosque of Yavu, passers alerted us to the macadam road, which we, however, rejected for their lack of understanding. As usual Wolfgang cared for interesting and entertaining stories about colonizing Lycia, about the changing Hellenistic and Roman rulers and their impact on the founding of cities in the region. No wonder, then, that the strenuous climb up to the ruins passed like a flight. Along the way there were one or two meetings with the local wildlife, especially some chains of procession spinners and some voracious but colorful caterpillars. Little later an almost closed, very deep cistern had demanded our attention and thus caused a disruption of our hike.

Once arrived in the ruined city, the primary interest of course was the theater, however, derived from early Hellenistic period. Here we initially paused again, listened the voices of nature before Wolfgang's first explanations started. Kyaneai already existed as a fortified settlement with a castle in the Archaic and Classical period, but probably just as dependent seat of the local Dynasten, which was managed from the nearby settlement on Avşar Tepesi (probably identical to the Lycian city Zagaba). The Lycian name of Kyaneai probably was Khbahñ, a name that is mentioned in the inscription pillar of Xanthos. Zagaba probably had held the function of a central place for the region in this early period, but went well in the first half of the 4th century BC during political and military conflicts between the dynasty of Xanthos and the dynasty of Limyra.

Probably Kyaneai has subsequently taken the function of a center city and became the most important settlement of Yavu uplands. In ancient written sources Kyaneai is barely mentioned, but it was, according to the evidence of its coins, inscriptions and archaeological remains a quite important Polis. It belonged to the Lycian Federation and within the empire of the Roman, it was part of the  province of Lycia et Pamphylia after 168 BC. Existing coins from the time of the Lycian League until Gordian III prove that. In late antiquity and during the Byzantine period Kyaneai was seat of a bishop who was subordinated to the metropolitan of Myra. Kyaneai was used until the beginning of the 13th century.

The ruins of Kyaneai lying on a hill above the village Yavu. City wall and theater originating from the early Hellenistic period, most of the other ruins (Roman bath and a market hall) are from the Roman Empire time. After a short tour of discovery through the theater, which is, moreover, very well preserved, we slowly went, crossing the fields of ruins, on the way back, which was now to follow on the marked trail back down to Yavu. Already during the first part of the necropolis, we were surprised at the high number of sarcophagi that appeared repeatedly on the path.

Kyaneai has more than 380 sarcophagi, the largest necropolis of sarcophagi in Lycia. Most of the local tombs are characterized by the ogival form of covering specifically used in this landscape. The most significant sarcophagus of Kyaneai dates from the first half of the 4th century BC. It shows various relief's and Lycian inscription. In it, a person called Khudalijẽ was buried, which certainly is one of the dynasts´ of Kyaneai.

So it was hardly surprising that our way down ended in repeatedly pauses to take pictures that in the end Wolfgang, due to his scheduling time table, liked to shorten. And really one motive followed the next, so that there were quite a lot of photo breaks. Little later a large herd of goats with their "escorts" who were much faster on the trail, overtook us anyway, while they could still graze. The speed of descent on the goat path even slowed down more, which was, however, a marked trail with red dots, sometimes difficult to find.

The area around Kyaneai was studied by an international and interdisciplinary team of scientists under the direction of Tübingen ancient historian Frank Kolb in-depth survey from 1989 to 2001, more excavations, however, have not happened so far. Fortunately Kyaneai is somewhat off the beaten track and is probably a unique-to-go and worth discovering.

St. Nicholas of Myra - a Christian Character in Demre

Kas - Hiking the village along its alley´s