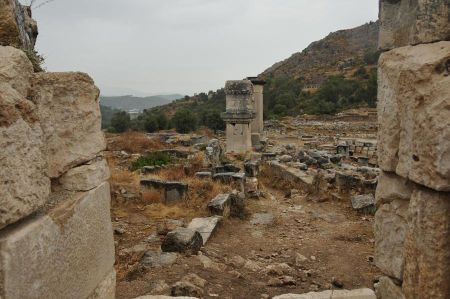 Xanthus is mentioned by numerous ancient Greek and Roman historical geographical writers. Strabo notes Xanthos as the largest city in Lycia, as the Capital of the Lycian Town Assembly.

The six largest towns of Lycia, Xanthus, Patara, Pinara, Olympus, Myra and Tlos, had three votes each at decisions made at the Lycian Town Assembly; the towns of more moderate size had two, and the remaining small places one vote each in the assembly, the first historically mentioned assembly of democratic governments.

We were again meeting with Wolfgang Dorn, who was travelling with a small group of historically interested people from Germany, explaining ancient places. And even the weatherconditions were terrible that day, we enjoyed it much to follow the explainations of Wolfgang. Lateron there was terrible rainfall, so we needed to hide ourselves which we did in some of the open grave boxes at the hillside. From the last picture you can already get how much rain there was falling in a short time: the main road of Xanthus was nearly covered with water.

The site of Xanthus and its magnificent ruins were first discovered and described by “Sir C. Fellows in his Excursion in Asia Minor”( p. 227):
“The site is extremely romantic, upon beautiful hills; some crowned with rocks, others rising perpendicularly from the river, which is seen winding its way down from the woody uplands, while beyond in the extreme distance are the snowy mountains in which it rises...

I have attempted a sketch of the most beautiful of the tombs, and I add the description by pen to make my drawing more intelligible. It is a sarcophagus, entirely of white marble, standing on the side of a hill rich with wild shrubs,—the distant mountains, of the silvery grey peculiar to marble rocks, forming the background...”

Xanthus turned out to be the most important centers of Lycia both in terms of religious approaches and political tendencies. The Xanthus City was ruined by the Persian people and people living in this city could not avoid this destruction, as they rebelled against the attacks only with a small army.

Herodotus describe the conquest of the city by Harpagus in approximately 547 BC.

“When Harpagus led his army towards Xanthus, the Lycians boldly advanced to meet him, and, though inferior in number, behaved with the greatest bravery. Being defeated, and pursued into their city, they collected their wives, children, and valuable effects into the citadel, and there consumed the whole in one immense fire. They afterwards, uniting themselves under the most solemn curses, made a private sally upon the enemy, and were every man put to death. Of those who now inhabit Lycia, calling themselves Xanthians, the whole are foreigners, eighty families excepted: these survived the calamity of their country, being at that time absent on some foreign expedition. Thus Xanthus fell into the hands of Harpagus; as also did Caunus, whose people imitated, almost in every respect, the example of the Lycians.”

The ancient town of Perge next to Antalya