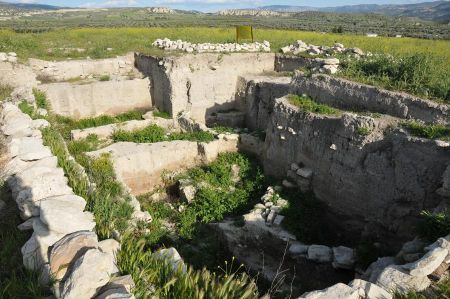 Our invitation from the Municipality of Mut, especially by the Kaymakam….. includes one more special event when we were going to Kilise Tepe, about 25 Kilometers outside of Mut. Always following the Göksu River we at least were leaving the main road going into a farm road, then even going cross country.

We needed to climb a little and finally saw some people awaiting us. One of them was the local Muhtar who was able to explain some parts of the excavations. Next to the fundaments of an ancient church, archaeologist’s found much older traces of settlements which belonged to Hettite times. So we did some more research by internet and found the following information from Cambridge and Newcastle Universities who are responsible for the Excavations at Kilise Tepe:

The mound of Kilise Tepe dominates the valley of the River Göksu (Classical Calycadnus) as it prepares to cut through the southernmost ridge of the Taurus mountains on its way to the Mediterranean at Silifke, about 45 km to the south-east. From its location it offers a prime opportunity to monitor the changing relationship between the Anatolian interior and the coast at different times. When the site was threatened by a hydro-electric barrage downstream a team from Cambridge mounted a five year rescue project jointly with the local museum at Silifke in the 1990's, and the results were finally published in 2007. In the same year a second five-year project was launched jointly from Cambridge and Newcastle Universities. We have now completed three excavation field seasons, in 2007, 2008 and 2009 and some of the salient results for the pre-Classical period are described in our website. The monograph of "Excavations at Kilise Tepe, 1994-98" is available from the McDonald Institute.

The work at Kilise Tepe in 2007-2010 is sponsored by the British Institute at Ankara, and the Cambridge team has received generous financial support from The British Academy (2007), the Institute for Aegean Prehistory (2007-2009), the National Geographic Society (2007-2008), the McDonald Institute for Archaeological Research (2007-2009) and the Cary Robertson Fund (Trinity College).  For 2010-2012 the project is supported by a Senior Research Fellowship held by Prof. Postgate from the Leverhulme Trust and by a grant from the Arts and Humanities Research Council.

Although for most of its history the Göksu valley looks for its cultural context towards the Mediterranean and to the cities of Cilicia, like Mersin and Tarsus, in the Late Bronze Age (1600-1200 BC) the Hittite Empire extended its political control from its capital at Hattusa southwards to include Cilicia (known as Kizzuwatna), and its influence on the material culture is clearly apparent in the Level III ceramics at Kilise Tepe. Later, in the final century of the Hittite Empire a large tract of territory in the south of Anatolia, known as the kingdom of Tarhuntassa, was entrusted by the Hittite king Hattusili III to a nephew called Kurunta as a subordinate king. The location of the eastern borders of Tarhuntassa is still subject to discussion among Hittitologists, but most would include the Göksu Valley within its frontiers.

At one of the major turning points in Old World history, the Hattusa dynasty collapsed along with other palatial regimes in the disruptions associated with the Sea Peoples, around 1190 BC, and it is likely that the Tarhuntassa Dynasty did not much outlast them. Across Anatolia strong central control was replaced by local power structures, and places like Kilise Tepe, where the population probably mostly spoke Luwian, may well have been abandoned or become one of a patchwork of small local centers. Writing had gone out with the palace bureaucracies, and historical news of our area has to await tangential references in the inscriptions of 8th-6th century Assyrian and Babylonian rulers, which confirm a fragmented political order with local rulers occupying mountain strongholds.

Our recent work at Kilise Tepe has concentrated on this era of major transformation. In particular, we want to observe the changes in three classes of evidence: the architecture, the ceramics, and the subsistence base as reflected in the animal and plant remains. That changes took place is obvious, and by observing them more closely we hope to shed light on the effects of the presence or absence of centralized government, and see how life changed for the inhabitants of the site in response to events further afield.