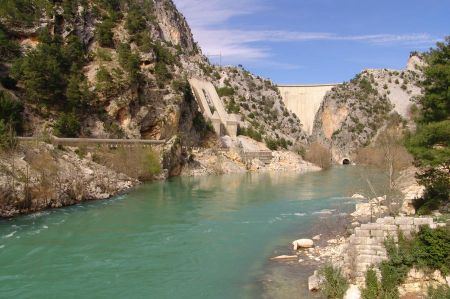 On a beautiful summer evening I set off in order to examine the Roman aqueduct that extends from Oymapınar Dam Lake of Dumanlı Spring, which is a technical masterpiece of ancient age and which has supplied water for public and private water facilities, nymphe pools, fountains, spas and houses, to the walls of Side.

Only some of the ones that supply water in the city was conserved and remained intact.

A masterpiece of Roman Engineering Arts

What renders this aqueduct of approximately 30 km of length which is passed through 13-km tunnels special is the fact that the distance that has an air line of a total of 25 km that extends to the city has a minimum inclination- the minimum inclination possible technically. The data is very clear: The world’s biggest karst spring is only at the altitude of 42 meters. It cannot be seen anymore as it feeds Manavgat River and flows into the dam lake today. Construction experts needed to perform the construction by building tunnels and aqueducts and finding the shortest distance possible. Construction experts could only make little use of the land suitability due to approximately 30 km of length of the aqueduct and the level difference between water facility inlets inside the City Wall that has a height varying from 35 meters to 7 meters. Water can only flow at a gradient of 2 percent. Water pressure of the spring adds to that but this pressure decreases in the process of distance naturally. In conclusion, the distance had to be kept short and every possible opportunity had to be taken to this end in order to preserve the water pressure. Side water facilities were free water facilities. In other words, only natural inclination was used for transportation of water. In this process of water transportation to Side, a total of 22 aqueducts were needed. A few of these aqueducts have been conserved until today while the others are only known in terms of their locations.

In conclusion, it is a fascinating facility whose traces I am going to follow.

I am starting from the nymphe pools located in the area where the park lot is situated today in front of the City Gates. This was the final point of the ancient water transportation line. Some of it was transported to the nymphe dye while its main portion was transported for inner-city water supply and distribution by passing through a big water hole bored in the wall. This hole exists even today (on the second and third wall column at the left hand side on the way out of the city).

We start our trip by heading for Manavgat first and on the 1.8th, 2,2nd and 2,6th kilometres of the way we come across with the first aqueduct remains on the right side of the road. We reach the Antalya- Alanya highway and follow the route towards Manavgat. We turn left so as to arrive at the Waterfalls on the 8.7th kilometre. I am going to end my expedition by giving a hot tea break accompanied with water purl on the side of Manavgat Waterfall after seeing everything here.
However, we are first going up-the-river. I follow the road till it ends and until the end of the dam. We encounter a Roman aqueduct remains that passes over the Naras River in 10,4th kilometer at the left hand side. In the era of Seljuks, the foundations and construction remains were used in order to build a five-arched road bridge.

Only columns of 7 meters of height and foundations of two columns in the river bed have survived from the Roman times. Picturesque position and a small teahouse invite many indigenous people and especially youngsters to have a picnic at the riverside. It is a popular touring site.

We reach the remains of a two-storey aqueduct on the 12th kilometre on Akçay River. It is worth entering the field road and going up to the tunnel entrance that ends behind the aqueduct. Only a distance of 300 meters can be walked on this part of the tunnel (with a torch, even with a helmet) and the special quality of Stone cutting workmanship can be observed. We come across a chimney approximately 30 meters above the tunnel entrance. This chimney is carved into a massive rock and leads to tunnel corridor.

Side tunnels are constructed in Qanat style which was used most commonly in ancient times and which is still available and used in Iran and Gulf countries today. The word “Qanat” means water supply gallery. The total tunnel length is divided into small parts and chimneys are carved from above in order to keep the inclination low with the help of fathometers and water levels and to continue construction of the tunnel bed without direction deviation as much as possible. Exact measurements were necessary for that. So as to keep the chimneys which were vertical short as much as possible, it was necessary to adapt to the land profile and find the lowest land area on the mountain. This explains why the tunnel bed passes through the mountain not straightly but by zigzagging. This can be observed best in the tunnel parts of the Akçay aqueduct.

The next tunnel section is the Yüksekkemer Bridge in the village of Bucakşeyhler on the 13th kilometer. After touring around the piedmont, we see a forest road on the left hand side. We proceed approximately 800 meters into this forest road in order to reach the foot of the aqueduct which still preserves its impressive form and which extends along the valley. 4 two-storey aqueducts which carried water for approximately 140 meters along the valley inclination have survived to date.

From here one can go up to the valley and turn left from the junction towards Seleukeia, which is a picturesque ancient ruins site or turn right so as to reach the main road again after covering a few kilometers. There is another aqueduct on the left hand side on the 20,3rd and 20,6th kilometers. The best thing to do is leave the car on the side of a field and walk about 300 meters into the forest. On a side of a treeless area are ruins of Alçakkemer and Mezarönü aqueducts in an interesting position.

Kırkgöz aqueduct leaves a magnificent impression with its 44 arches and a length of 335 meters in terms of its architecture and position. The bridge, which is among the great works of the ancient era, attains 12,5 meters of height in the middle. These aqueducts which are constructed out of sandstone offer a glorious riot of colors especially in the afternoon.

The final aqueduct that should be seen comes after the control point built for the safety of the Oymapınar dam lake. (Identity!) At the right hand side on the way to the ancient aqueduct, on a parking lot is Gözyanı Bridge which had a height of 88 meters in the past over which a modern water pipe passes even today.

You can have a wonderful view of Oymapınar Dam Lake and the valley where Manavgat River is located over the dam wall which is reached by following a road marked by signs. Ypu can also see the other two bridges having sunk into the dam lake and the source of Dumanlı spring. A little patience can enable you to realize the aqueduct gallery on the steep rocks which is a technical masterstroke.

You can visit the aqueduct gallery right next to the dam wall by getting permission from the control point. Apart from the other galleries having remained in the dam lake, this gallery is an achievement peculiar to Roman architects and has been realized in very few places. It is something between a tunnel and an open conduit. This form was only created when it was necessary to pass through the massive rocks. The carved road line offers a very pragmatic solution. The conduits were carved into a nearly-vertical rock and a high barricade supported by natural reinforcement arches was left on the side of the river.

The conduit itself has a width of 1,8 meters and is surrounded by steep rocks from both sides. On the side of the mountain, this conduit is carved along 10 meters into the rock and is supported by reinforcements of 3 meters of height on the side of the valley.
The whole facility was constructed in 2nd and 3rd centuries AD in the golden age of Side in Roman times.

If there was a list named 7 wonders of the ancient era, Side water line would without doubt be in it.

I am pleased to give a resting break in spite of the crowd of tourists on the side of Manavgat Waterfall after so many water facility construction techniques. I was almost alone in this impressive tour of today and was able to embrace nature and technique peacefully. Unfortunately two years ago a disastrous forest fire caused a significant damage to the natural beauty. I hope that the forest gets better and blossoms as soon as possible.