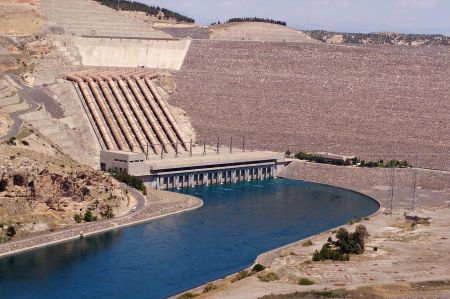 The Atatürk dam (Turkish Atatürk Barajı) on the Euphrates is the first finished, most important and largest of the 22 dams of the Southeast Anatolia project GAP (Güneydogu Anadolu Projesi) in Turkey.

The reservoir named after Mustafa Kemal Atatürk is about 1.5 times the size of Lake Constance. The width of the reservoir is up to 1.6 km. The dam is - measured in storage space - the 22nd largest in the world, according to the bulk volume of the dam it is the ninth largest. It  was completed in 1992.

Southeastern Anatolia in Turkey is one of the poorest parts of the country, and the entire project involved the construction of 22 dams and 19 hydropower plants to irrigate 1.7 million hectares of agricultural land and provide additional electricity generation of 27,000 gigawatt hours. More than half of this expected performance is achieved by the Atatürk dam alone.

The Ataturk Dam has helped Turkey to secure enormous economic supremacy over rich Israel and other neighboring countries. Water is very scarce in the region except on the Euphrates and Tigris rivers. So the waters of these two mighty streams were used to put an end to the water shortage. Over the years, more and more huge dams were built. With these accumulated water masses of the two streams, the actually fertile soil of the whole region of Anatolia can be watered and cultivated.

The dams are also used for irrigation in agriculture

Since 1976, the development project has been running more water to use for energy and agriculture, stretching from the mountains of the Taurus to the Syrian border. The Atatürk dam brings high potentials for energy production, and the expansion of the irrigation area intensifies agricultural use immensely. Another advantage of the Ataturk dam was the industrialization of the region, which automatically brought with it an increase in tourism.

From a purely financial point of view, this project poses very high challenges for the Turkish government. It can easily be seen as the biggest investment project in Turkish history at the time. But not only agriculture or energy production are closely related to this project. Educational programs and health programs are also included in the project.

The dam is used for power generation and through the two tunnels at Şanlıurfa agricultural irrigation of 1.7 million hectares of land. The hydropower plant generates just under one-tenth of Turkey's electrical energy. However, about 55,000 to 65,000 people were resettled for the Atatürk Dam.

Also a controversial building - is the ecology on the track too?

The Atatürk dam is - like all new dams - a controversial building because it brought ecological, economic and political problems. By erosion it silted more and more, as the soil from the surrounding landscape is flushed into the reservoir. In 1998, the Turkish government decided to reforest the slopes around the Atatürk Reservoir, an area of the size of the Saarland. Thousands of volunteer students planted trees on the lake shore.

In an agreement with Syria in 1987, Turkey committed to drain at least 500 cubic meters of water per second through the Euphrates further down to Syria.
Please read as well: