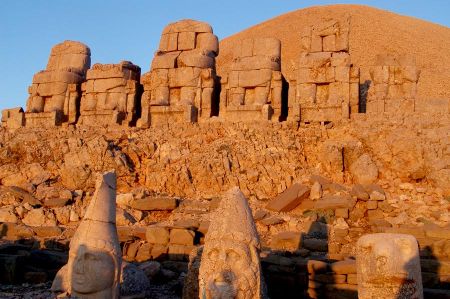 Nemrut Mountain, much better known as the Mountain of Nemrut, is in the province of Adiyaman to the west of the Euphrates valley in the south east of Turkey and is one of the most important tourist sites in the country.

It is known that during ancient times the Khatter built a holy place for the sun god Khepat and erected a temple on the top. Later King Antiochus was responsible for the construction of a temple, a palace, a ceremonial road and the columns of terraces on the mountain. Along the main avenue he put statues of gods and other holy figures.

Even today, at a height of about 2.150 metres, there is a huge number of statues of Greek and Persian ancient holy figures to be seen on three huge terraces. At the base of a fifty-metre-high, 150 metre-square gravel hill, scientists suspect that there is the grave of the king. Up till now all attempts to find a way to get inside the hill have failed. Wherever they started digging they soon came across huge amounts of rock.

The view from the top of this mountain is really spectacular. The mountains of Malatya and Adiyaman can be seen in all their beauty together with the shimmering lakes of the region. The sunset seen from the eastern part of the terrace is the most beautiful sight.

The mountain of Nemrut is considered by many to be the eighth wonder of the world. The remarkable peak of the mountain can be seen from far away so the visitor can easily find the mountain. However, it is still a very long way to the peak and you sometimes lose sight of it. Then suddenly it appears again and then is gone again. You can never be sure you are on the right path.

The most important ancient ruins of the region, the Perri ruins and Pirin cave, are in the north of Adiyaman. The Kingdom of Kommagene, ruled by Antiochus I, was just a small kingdom in the south eastern part of Turkey. Antiochus believed himself to be descended from the Persians, especially Darius, and the Hellenistic people (particularly Alexander the Great). There are statues of these ancestors and others on the mountain.

The walls of the palace and the ruins of the aqueducts are still in good condition. There are about 210 graves dug into the rocks which were also used as homes. In the caves, dug during the Stone Age, archaeologists have found lots of household goods from the Bronze, Stone and Iron ages.

More information can be found on the webpage www.nemrud.nl. This is the official webpage of the I.N.F. (The International Nemrut Foundation) which is available in German, English and Dutch.

Gaziantep - Past and Present - The Mosaic Museum