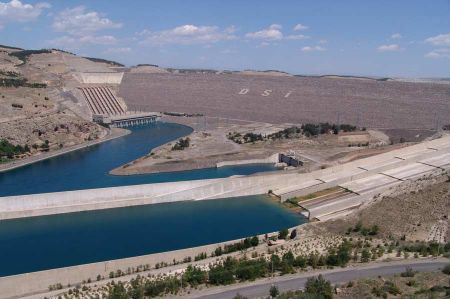 Once founded by the Hittites with the name Kummulu, Samosata later became the capital of the Assyrian Empire.

The excellent location on the right bank and on one of the few crossings of the Euphrates were the cause of the constant further development and fortification of the city as a trading center on the east-west trade routes and in the area of ​​Greek-Hellenistic education; This is also the case in the Kingdom of Commagene, whose capital Samosato was in 160 BC. Samosata was also of great importance as a way station on the route from Damascus, Palmyra and Sura up to Armenia and the Black Sea. A well-known personality of that time was the writer and satirist Lucian, who lived in Samosata. With the expansion of the Roman Empire, Samosato fell to Rome in 72 BC, which later incorporated all of Commagene into the Roman Empire.

A story in Christian matyrology, the truth of which must at least be strongly questioned, says the crucifixion of 7 people named Abibus, Hipparchus, Iakobus, Lollian, Paragnus, Philotheus and Romanus in Samosata in the year 297 because they refused pagan rites to be performed on the occasion of Emperor Maximian's victory on the Persians. Two reasons support these doubts, because firstly, Emperor Galerius was the emperor responsible for Samosata and secondly, the persecution of Christians just began in the year 303 AD.

Under the rulership of Emperor Julian, Samosata was the site where much of the ships later used by Julian against the Persian king Shapur II were built. In the 7th century there was fierce fighting between Emperor Heraclius and the Persian king Chosrau II directly in and around the city. Together, the Armenian general Melias the Great and the Byzantine "domestikos to scholon" John Kurkuas destroyed the city of Samosata in 934 after the protracted siege of Melitene. Kurkuas then tried to set up a Byzantine base in Militene, where he had all the Arabs expelled. After the famous Battle of Manzikert, Samosata fell to the ruler Philaretos Brachamios, shortly afterwards to the Emir of Harran, Charaf ad-Daula (1085).

Just 13 years later, the Count of Edessa, later King of Jerusalem, Balduin destroyed the army of Emir Balduch during the first crusade in Samosata. Alternating years of conquest and loss between Muslims and Christians followed until 1392 when Samosata fell to the Ottomans. The Central Asian conqueror Tamerlane, better known as Timur Lenk, raided and sacked the city in 1401. It was only more than 100 years later that the Ottomans were able to win back the city, which now became the capital of a sanjak. However, all the wars and conflicts with the most diverse rulers had ensured that Samosata became increasingly less important.

With the construction of the Atatürk Dam, the residents of the city of Samosata, which had been elevated to a district in 1960, had to leave the city. They were resettled in 1988 in the newly founded city of Samsat. A few finds from the ancient city of Samosata are now in the Archaeological Museum of Adiyaman. With the completion of the dam project, the ruins of Samosata were completely flooded.

Submerged in the floods of the Euphrates: Zeugma

Gaziantep - Past and Present