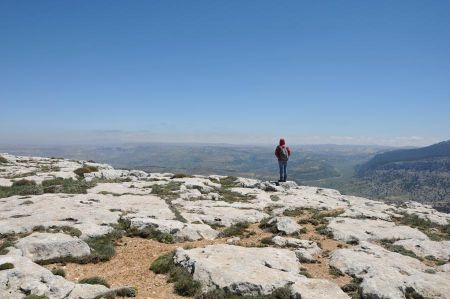 The eastern part of Turkey offers a huge variety to mountain climbers, from the tropical landscape of the Ponti Mountains along the Black Sea coast to the year-long snow-covered peak of Mount Ararat and the area of Hakkari in the far south-east. In the tradition of the Armenian people Mount Ararat is the centre of the universe and the Armenian people are the children of the mountain.

This mountain is first mentioned in the book of Genesis as the refuge of Noah´s Ark. More and more people are doing research on the Ark, most of them starting their trip at Dogubayazit. Some say they have found parts of the holy relic.

Most well-known mountains are former volcanoes

The flat bottom of the Anatolian Plateau is dominated by mountain peaks. The most important ones are Nemrut Dagi (at Van lake), the Erciyes Dagi (next to Kayseri) and, of course, Mount Ararat. At over 5.000 metres, it is the highest mountain in Turkey. Its snow-covered summit can be seen from a distance of more than 50 kilometres. During the summer only the highest parts are covered with snow so that is the only time it is possible to climb to the top.

From a distance, you may think it is easy to climb this mountain, but its lava fields are very hazardous and the weather conditions can quickly become dangerous. Johann Jacob Parrot was the first to climb Mount Ararat. Today there are expeditions nearly once a week starting at Dogubayzit. To get to the top takes three days, to return to the bottom, another two days. Permission for the climb can be obtained by your travel agency but you should apply for it three months in advance. Expeditions doing research on Noah´s Ark need to have special permission from the government which can take much longer.

Since the Hakkiri region is completely prohibited to mountain climbers, they use the comparable Ala Dag Mountains south of Nigde instead. The big advantage is that you can reach this area much more easily. The climb starts from Camardi, a small village reachable on small winding roads by car. There you can hire mules and a guide for your expedition. There is no permission needed at Ala Daglari.

This mountain range, which stretches along the Black Sea coast between Trabzon and Hopa, is getting more and more well-known and is further away from the Kurdish areas. It is usual to start the expedition at Ayder, which is reachable through the valleys of Hemsin and Camlihemsin. There are about a dozen simple hostels, one actually calling itself the Hilton! You can decide whether you want to do a one day trip or climb into the mountains for a week. Guides are available and permission is not necessary.

At the hostels in Ayder you can take a shower in the naturally warm water of the hot springs. (Men and women take their showers separately). The temperature of the water can be up to 57 ° Celsius. Pure bliss!