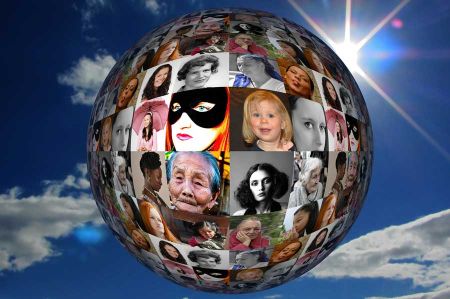 We have raised the issue of "domestic violence against women in Turkish society" a number of times, when news of brutal murder of a woman shakes the world again.

Apparently, according to witness statements, who observed the process in the final phase but could no longer intervene due to the fast happenings, a couple had had a dispute with them in their own hallway due to the woman's telephone call being too long. Once on the street, the husband suddenly had a knife in his hand and stabbed his wife several times, despite the presence of their two children. And despite the emergency doctor arriving quickly on site, the 38-year-old mother of 3 children could no longer be saved. However, the man who tried to escape was arrested a little later still in possession of the murder weapon.

"I could have been" is therefore the not wrongly chosen motto of a Turkish-wide campaign by eight Turkish artists on behalf of the Turkish authorities, which calls with partly shocking photos of the still existing and partly horror trivialized by society, everyday violence against women. Therefore, March 8th, as a world-wide recognized women's day, is again the date for many protest actions all over Turkey, which is also supported by well-known male artists.

With the active support of make-up artists, the eight prominent Turkish artists were made up to victims of beatings and murder and an often-shocking series of photos was created and distributed via the media. "Eight women - eight lives" is just another motto, because all eight women stand for a murdered victim of domestic violence. Whether declared as honour killings or as a mere act of affect, there are still attacks on women, often with a fatal outcome. When MEP Fatma Salman Kotan appeared in the plenary session of the parliament with a blue-eyed eye in December of last year, the women's rights debate also reached the Turkish parliament. As a result, there was a flash decision for MP Kotan, but not much has been done nationwide. Not to mention rethinking and changing behaviour. The criticism of the Erdogan government on this year's Women's Day is correspondingly harsh: far too little is done for women's rights and the punishment of the perpetrators is far too lax.

Women's day should not be celebrated - says Tarkan

The Turkish-German pop star Tarkan even believes that World Women's Day should not be celebrated in Turkey, there is no reason for celebrations, because women are still threatened by violence and murder by men here. “In a society where motherhood and mothers are honoured, there are unfortunately also men who kill women and girls. This contradiction is incomprehensible,” said Tarkan in a statement in the press.

Even on the late Thursday evening before International Women's Day on Friday, a woman in the Istanbul district of Kartal was just saved by the police. The young woman, who regularly suffered from domestic violence from her husband, was able to alert the police in good time because her husband was waiting for her in front of the house with a knife. Only a shot in the leg was able to dissuade the angry man from his plans, because he was also ready to attack the police officers. At least one police complaint was filed here.

Little effort on the part of the state

The criticism heard by the protesters is primarily directed at the state's efforts to protect women, which is considered to be absolutely inadequate. Legal reforms did not work because official institutions such as the police and gendarmerie would not fully apply the existing laws and regulations. Abdullah Gül sees the problem in the lack of pedagogical concepts, which could make women aware of their rights and which could no longer explain equality to men as an empty phrase. Laws alone do not change here, so his message on the occasion of World Women's Day.

"I could have been them" is at least a new impetus to revive the international women's day in Turkey again. Activists gathered in many places in Turkey for rallies and awareness-raising events.

We have 303 guests and no members online