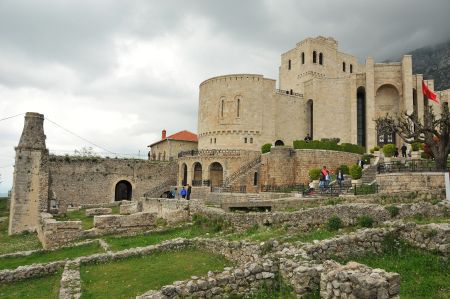 Some time ago, we had already published an article on the fortress of Kruja; now, within the part wise guided camper trip through Albania, Greece and Macedonia, we have got further impressions, which we gladly publish in another article, especially since the fortress of Kruja is such an historical sanctuary for the Albanian nation.

On the mountain above the town in one of the caves lies one of the presumptive tombs of Sari Saltik, a saint of the Bektashi order. The Bektashi Tarīqa is one of the largest and most influential Islamic-Alevi dervish orders in Anatolia and the Balkans. The founder of the Order traditionally is the Sufi and mystic Hadji Bektash, to whom most Alevites pray. However, it is more likely that the Order was named after this man and not that he founded his own Order with his name. This legendary mystic, to whom Bektashi refers, is also revered by the Alevis as the most important saint after Ali ibn Abi Talib.

The national park Qafë Shtama can be found further east. The most important source of water in the park above the castle of Kruja is called Kroi i Nënës Mbretëreshë, which is known for its clean, clear and healthy water. The legend links the source to the Albanian royal family, which allegedly were delivered with water from this source daily, after getting to know that it is the best water in the country by tests from a laboratory in Vienna in 1932. The water is taken here and brought to a drinks bottling association somewhat further down at the park entrance. The mineral water produced here is sold nationwide under the Qafshtama brand.

The castle has been inhabited since the 4th or 5th century and was fortified with walls by the 12th century. In the early Middle Ages, Kruja developed between the 6th and 9th centuries from a middle-sized castle settlement to an urban center. Artifacts from this period, which were found in tombs and the high social status as well as the richness of those who are buried here, testify to this. In the 9th century, the city was the seat of a bishop named David, who was a participant in the Fourth Council of Constantinople.

In 1190, Progon founded the principality of Arbanon with the castle Kruja as a center of dominance. It was the first principality dominated by an Albanian nobleman. In 1415, Kruja was conquered by the Ottoman troops led by Sultan Mehmed I. In the middle of the 15th century, Skanderbeg, with its League of Lezha, recaptured the city and defended the fortress for Albania for several decades against the advancing Ottomans. After the death of Skanderbeg in 1478, the Turks were able to completely occupy Kruja and the rest of Albania and dominate it for more than 400 years. In the 16th century the bazaar mosque, which still stands today, was built. In 1617 the medieval Kruja was devastated by a strong earthquake.

In the Toptani house, a large and elaborately designed Ottoman mansion from 1764, the sub-prefecture, the court and the prison of Kruja were located until the Second World War.

The Skanderbeg Museum within the walls of the fortress, reminiscent of the battle of the Albanians under Skanderbeg and its League of Lezha, was conceived by the architect Pranvera Hoxha, the daughter of Enver Hoxha, and is supposed to arouse the appearance of a medieval castle. Within the walls of the fortress there is the small doll museum of the Bektashi, an ethnographic museum and a Turkish bath. In the lower part of the fortress are numerous small houses, where families still live. At the foot of the castle hill you will find a restored bazaar street, whose buildings date from the 19th century and reflect the typical architecture of the mountain area.

Our tour through the impressive fortress of Kruja

Kruja - center in the struggle for freedom in Albania