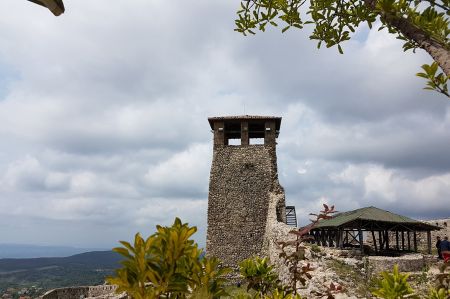 After the visit of the Skanderbeg Museum which is inside the fortress of Kruja, a tour of the castle grounds and the local buildings should follow, in spite of the threatening dark sky, which was part wise looking like strong rain could appear, but we were lucky.

The fortress Kruja joins the center of Kruja to the south with the bazaar, we have published a blog about it. The castle is located on a steeply sloping rock block, which slopes slightly from east to west like the surrounding terrain. Through the steep cliffs on all sides there were only two accesses to the fortress. In the west, the fortress below the rock wall is a small kennel, which can be reached by a narrow aisle between Tekke and Hamman. There is a source from which the name of the city of Kruja derives.

The castle mountain has been inhabited since the 4th or 5th century and was fortified with walls by the 12th century. As a result, the fortress saw various owners, including the Thopia and from 1415 the Ottomans. In 1443 the Albanian national hero Skanderbeg took over the castle without a fight. The fortress was besieged three times - in the years 1450, 1466 and 1467 - by large Ottoman armies until it fell at the fourth siege in 1478, ten years after the death of Skanderbeg. The Turks erected various houses in the Ottoman style, and the fortifications were also largely renovated, so that Ottoman buildings can be even seen today.

An earthquake in 1617 caused damage to the rock walls in the southeast area, which also destroyed the castle wall above. According to Machielkiel, the fortress was dragged by the Ottomans in revolts against the Tanzimat in 1831; the historian Baki Dollma declares the year 1855 for the same story.

In the Toptani house, a large and elaborately designed Ottoman mansion from 1764, the sub-prefecture, the court and the prison of Kruja were located until the Second World War.

Other important sights besides the restaurants are:

Ascent to Petrela - coffee break in the castles garden