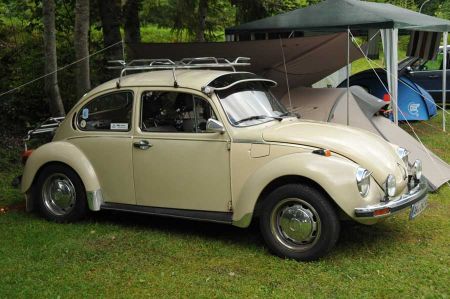 After a problem-free tour from Regensburg, we arrived at the Vorderboden campsite in the Kleinwalsertal, which is at least 1194 meters above sea level.

We noticed a group of young people who, in addition to two small tents and a canopy for breakfast, had a little jewel with them, a VW Beetle oldie.

The next morning there was the first conversation and it was agreed that we would meet again at a later time to discuss the issue of beetles in more detail. Unfortunately, the weather of the last few days was anything but pleasant, so it was not so easy for campers with tents to keep their tent and clothes dry. This was also the reason for our new acquaintance, but to leave a day earlier than planned, not without the fact that we could have had a little chat. 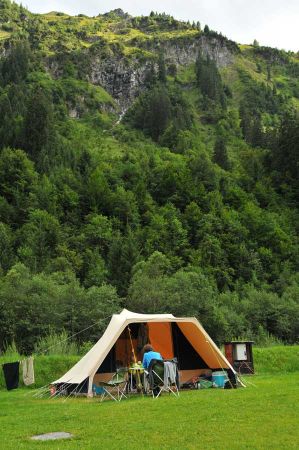 The two couple, Jan-Thore and Anna as well as Alena and Philipp, have already been to Kleinwalsertal several times, but so far always for winter sports. They are lucky that a friend from their hometown has been spending the winter in the valley as a ski instructor for many years, so it is obvious that the two couples use this contact. As a very open-minded guy, Pete, as the snowboard instructor is called, has long been integrated by the local population and so he was able to successfully support the search for accommodation. We also learn that around 80% of winter guests keep returning as regulars, so it's no wonder that it's difficult to find accommodation over New Year's Eve.

Above all, it was Anna who, after her last skiing holiday, wanted to see the mountains in summer and without snow. So the decision was quickly made that there should at least be a short meeting of the two couples in Kleinwalsertal. Alena and Philipp had long since planned something completely different for this summer, because an acquaintance of the two had persuaded them to go on a tour to Sweden. Trelleborg and Gothenburg were the actual destinations. It was important for the two VW fans, not only because of the age and the associated maximum speed of the vehicle, that the entire route should be completed on country roads. As a route, the two had come up with the so-called brick route. 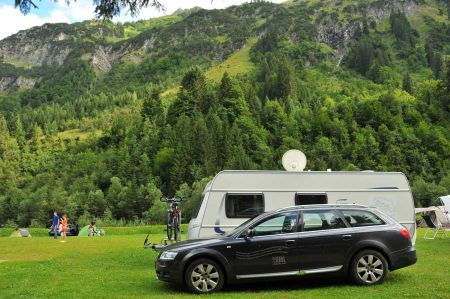 The Beetle from 1972 present here at the campsite has been owned by Philipp for many years, along with three other VW Beetles and two VW buses. "You have to earn driving this Beetle," his father used to say, until it was finally handed over. The engine, a stately 50 HP bolide, had been completely overhauled before the start of the journey, so that Philipp could at least fix the most important problems himself, if any.

Some of the details were interesting that the Beetle fan Philipp, Alena today is actually part of the fan community, told us from the experience of the handicraft lessons with his father. For example, they had once received a VW Bulli whose engine was always too hot. As it could not be clarified immediately where the problem came from, the cooler system was dismantled without further ado. Lo and behold, the remains of countless Spirelli pasta were found in the cooler system. The previous owner had believed that starch washed out of the noodles would ensure that the cooler seals itself. Which is correct in the literal sense! However, the sealing takes place within the cooling system, because the noodles themselves also expand, thus forming a dense mass and closing the cooling system.

After completing various work, the 72 Beetle was ready to travel. So let's head for Sweden, always along the brick route. When Alena and Philipp arrived in Malmö a few days later, in other words still a long way from their actual destinations, the spontaneous decision was better to turn back in order to meet Anna and Jan-Thore at the agreed meeting point in Kleinwalsertal. Which actually worked out because the beetle runs and runs!

And for all four, Jan-Thore and Anna as well as Alena and Philipp, the fun factor on vacation is the decisive element. You don't need to be able to ski professionally, just as you don't have to be a perfectly equipped hiker or camper to have fun. A positive attitude is important. And all four of us noticed that.