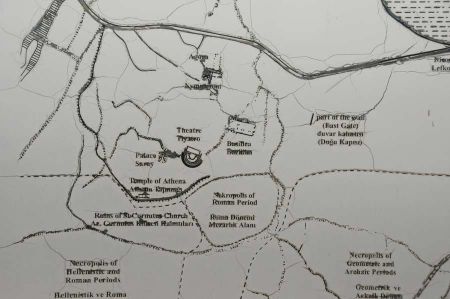 From Kormacit we had left to the ruins of the ancient Roman City of Soli, a city whose traces can be followed back to the 11th century BC.

From inscriptions we know that the name being influenced by Assyrians was once written like Si-il-lu. With increasing Greek influence, probably due to the well-known philosopher Solon, the name was then converted into Solos. Another story talks about the Aepeanian King Philicypros who wanted to move his capital town to another location, then by recommendation of the philosopher Solon, Soli was built in the wonderfully fertile region near the sea, with offered a sheltered harbor too.

During the Ionian revolt against the Persians in 498 BC, Solis citizens revolted too against Persian domination, but the Persians could conquer Soli again. During the early years of Christianity Soli became a major center of Orthodox Christians. Soli had become so important that it was represented at the Congress of Nicaea (Iznik) by 3 bishops in 325 AD; at the Congress of Sardis even by 12 bishops.

A part of Soli´s prosperity origin due to the copper mines in the region and in the resulting trade. These mines were exhausted, however, at the end of the 4th century, after which they were closed and the port was filled to prevent the entry of ships. Increasingly, the city lost importance and was destroyed during the Arab invasions in the 7th century.

During the excavations, a theater, several temples, palace ruins, a large agora, a church and a large necropolis were discovered in Soli that assign structurally different eras. A Swedish excavation team had carried out appropriate investigations 1930's. During the excavations at the theater, they found a temple dedicated to Isis, another one to Aphrodite and Temple of Serapis. The Aphrodite Temple is located on a hill to the west of the theater, but not excavated so far. The sculptures found in the temple of Aphrodite date from the first century AD and can be admired in the Museum of Cyprus today.

The palace ruins from the Hellenistic period have also been found on the hill, the investigations in Soli continued with Canadian archaeologists in the 60s of the last century. An excavation team of Laval University Quebec unearthened the ruins of an early Christian church in 1967. Also a large number of graves in the necropolis were discovered, they origin from the geometric period (1050 - 750 BC) until the Roman time (58/50 BC - 395 AD).

The Canadians also found the urban Agora with the remains of a fountain made of marble, as well as shops, which are clearly attributable to the early Roman period and ruins and finds from the Hellenistic period. More excavations by the Department of Archaeology Northern Cyprus in 2005 brought further tombs to daylight as well as numerous other discoveries. One of the grave sites contained a golden crown, a tiara and other gold ornaments, so that it is believed to have discovered the grave of a former ruler. These finds are displayed in the Museum of Archaeology and Nature in Güzelyurt today.

As already mentioned, one of the first Christian churches of Cyprus have been in Soli, a five-nave cathedral. A coin found in the cathedral origins from the 4th century. A later restoration resulted in a spatial separation of the naves by 12 giant pillars, some of which still stand today. After removal of the sediments some perfectly preserved mosaics were found that assign to different times too. The design Tesserea, which has evolved from the usage of very small stones, dating back to the 4th century AD. These mosaics show geometric figures as well as portraits of animals such as birds and bulls. Between the animal pictures vines are designed, as well as the symbolic image of swans.

In the apse in addition to the mosaics there are slogans saying: "Jesus, protect those who have created this mosaic"! The narthex and the northern part of the floor is decorated in art opus sectile mosaic, a type using geometrically tailored stones which originate from the 6th century.

Following the Christian tradition, it is believed that the Holy St. Mark was baptized by the Holy Soli St. Auxibus, a Roman Christian who came to Soli in the first century and later became the first bishop of the church of Soli.

The Roman Theatre was built on top of the ruins of a Greek predecessor building. It origins from the 2nd century and looks, beautifully situated, to the ocean, as almost common in theaters in coastal areas! The seats have been sculpted as a plated semicircle into the rocks. The grandstands are separated by a limestone in the middle wall from the Orchestra. A large part of the missing stone material (now replaced by replicas) of the theater had been used in the 19th century to build the harbor of Port Said. The theater today has a capacity of 4,000 spectators after the reconstructions, making it half the size of the original. The stage has two floors and was once covered with marble and decorated with sculptures.

Mosaics and the ruins of the cathedral are now protected by a canopy, so that this is a real treat for warm daytime temperatures during a visit. For us Soli was a real surprise, never before have we had heard about the excavations there, in conjunction with Cyprus always Salamis occurs. A big mistake, as we realized after visiting. You can also visit the Museum in Güzelyurt which exhibits the finds of Soli particularly interesting are the filigree golden grave goods.

Girne / Kyrenia - a short history of the city