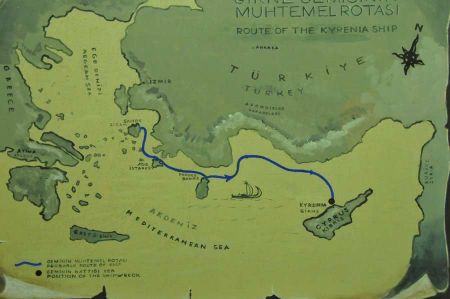 Wilbrand of Oldenburg, at the time Bishop of Paderborn and Utrecht, was very close to Emperor Otto IV, when between 1211-1212, he was send to prepare another crusade to the Holy Land, where he especially explored Cilicia and Cyprus.

He has documented lot of details he discovered during his trips into his itinerary which was used lateron for the preparation of the crusade. He was accompanied by a master of the Knights and the Master of the Teutonic Order, Hermann von Salza, elected into office in 1210.

Wilbrand of Oldenburg still called Girne as "Schernis" due to the pronunciation of the Greek name what was likely to be at hand, as its transcription Cerines or Cherines was often used too. In  Italian thus concluded another version as name like Cerine. The Turkish name came much later. Between 1631 and 1738 the variation of Gerines has survived as name, it changed to Gerinia until 1814, after that to the modern name Girne.

But let us have a look to the ancient times first, because in the 10th to 9th century BC Kyrenia / Girne was one of nine city-kingdoms of Cyprus. Excavations close to modern Girne shows an originally Neolithic settlement called Ayios Epiktitos Vrysi / Çatalköy, lying on a small promontory which appeared as if it could fall into the sea. Kyrenia itself was first mentioned in the 4th century BC.

Keryneia, this name was first mentioned in the Periplus of the Mediterranean in the famous ancient documentations of Pseudo Skylax which is also the only resource which represents the city in a larger historical context, it even described some events from the 4th century BC. At that time, the independent Keryneia was under the rule of an unknown dynast at the side of Antigonus I. Monophthalmos along with other city kings of Cyprus against Ptolemy I in the third Diadochen War. Later, Seleucus I, ally of Ptolemy V conquered Keryneia in the year 315 BC.

In 312 BC the dynastic system was disbanded in Keryneia by Ptolemy and the city together with its territory came under the control of the Salami African king Nicocreon, a former comrade of Alexander the Great in the battle of Tyros.

Among various forms of names - Keraunia, Corinaeum, Cerinia, Cernia - the city is indeed mentioned repeatedly, but these sites do not offer further clues to the history of the city. Fragments of Greek and Phoenician inscriptions from Keryneia suggests that a corresponding, Phoenician population next to the Greek, was established there. Their cults were those of Aphrodite and Apollo, proved by inscriptions on buildings, a gymnasium is mentioned.

The rocky plain of Chrysokava in Roman times was used as a cemetery and then as a limestone quarry. Under the Roman Emperor Claudius, the city may have received an aqueduct; the city is also mentioned in an inscription from the Flavian period. Whether it held the status of a civitas, is not assured. In early Christian times the city was a bishopric under the name of Kyrenia.

The city became well known among archaeologists and ancient historians through the "Ship of Kyrenia", which today can be seen in the Shipwreck Museum of the eponymous city. The almost 15 meter long ship sank in about 300 BC. It was discovered in 1965 by the Cypriot diver Andreas Kariolou in a depth of 30 m and recovered by Michael Katzev from the University of Pennsylvania in 1967.

Under the Byzantine Emperor Alexius I Comnenus, the castle was greatly expanded. After the island had declared itself independent from Byzantium in 1185, the English King Richard the Lionheart conquered the island in 1191 and captured the treasury of Kyrenia.

The Venetians extended the fortifications of the city in 1540 massively to defend the island against the Ottomans. Nevertheless they could conquer the island between 1570 to 1571. Kyrenia surrendered after Efgenios Synglitico (Zeno the younger), Count of Rocca, the leader of the Venetian troops, together with his brother Tommaso, the viscount of Nicosia, had been killed.

In the 18th century Ottoman rule was marked by the sale of curious duties (f.e. slaves), against which there were riots. Leader of the uprising of 1765 was Khalil Agha, whose more than 5,000 followers began to dissolve in June in the fight emitted by Ottoman troops, so that  there were only 200 men left at his disposal. They were besieged in Kyrenia, Khalil had to give up.

1878, the island came to Britain and became independent in 1960. In 1946, 2.373 Greeks, 696 Turks, 233 Britons, 30 Armenians, Maronites and 154 others were counted in Kyrenia.
1974 the Operation Atilla with the establishment of a bridgehead (Atilla I) began in the Bay of Pentemili, 8 kilometers west of Kyrenia. 3,000 Turkish troops landed. using landing craft at Escape beach. At the end of Operation Atilla I, these troops controlled 3% of the island, including Girne. The Greek population of the town fled to the South of the island. Resettled Turkish Cypriots from the south of the island settled among others in Girne. Today some sites remember both the bridgehead and the advance of Turkish troops.