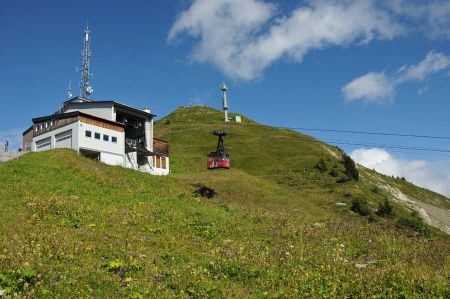 Once settled at the Vorderboden campsite in Kleinwalsertal, we set out on our first exploratory tour of Mittelberg, which is the main village of the functional exclave Kleinwalsertal alongside Baad and Riesler.

There is only one road leading into the Austrian valley which can only be used from Germany. The consequences and regulations that have been found over the years based on this fact which was one of the reasons for us to follow the footsteps of the Walsers a little.

Once again, the many years of experience of the tourism organizations in the valley have proven to be extremely professional, because once you arrive at your destination, you can "leave" your own vehicle right away, the public transport in the form of the Walserbus works quickly and perfectly organized. In addition to main line 1, which connects the valley at the end of Baad, including the Vorderboden campsite with Oberstdorf in Germany and runs every 15-20 minutes, there are 4 other lines so that all destinations in the valley can easily be reached. The "Allgäu Walser Card" (available at the campsite, in the tourist offices and in the guest houses), which is required for free use of the buses, also proves to be extremely practical. This "personal experience ticket" contains a chip that can be topped up as required and is therefore also used as a travel ticket for the mountain railways.

Buslines make it easy to leave own car at the campground 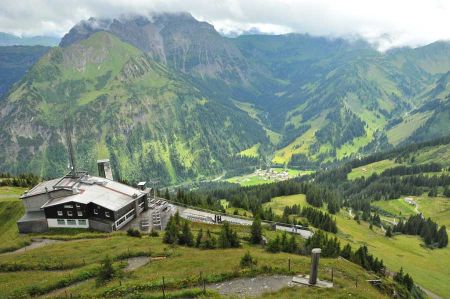 With our Walser bus line 1, we get to the centre of Mittelberg, directly opposite the highest mountain in the valley, Großer Widderstein, which goes up to 2,536 meters above sea level. Incidentally, the mountain range separates the Kleinwalsertal from the national territory of Austria and the first Walsers are said to have penetrated into the previously uninhabited valley via a depression. But more on that later. Other peaks in Mittelberg are the Elfer (2,387 m), the Zwölfer (2,224 m), the Bärenkopf (2,083 m) and the Walmendingerhorn at 1,990 meters.

Our focus is primarily on the last-mentioned Walmendingerhorn and its cable car, which should bring us to the first summit in the Kleinwalsertal to get an overview of the valley. The valley station of the Walmendingerhornbahn, built in 1966, is already at an altitude of 1,200 meters. Completely renovated in 2006 and equipped with a large viewing platform and a sun terrace, the Walmendingerhorn is now the starting point for many circular hikes for mountain tourists. The alpine flower nature trail, which leads between the mountain station at 1,946 meters and the summit cross, is also very interesting. As early as the next morning, according to our plan, we wanted to take part in the announced tour along the Alpine flower nature trail and then start our first hike, so hopefully the weather cooperates. 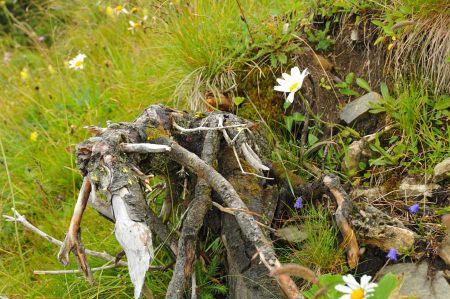 Lo and behold, the weather was at its best. Not a cloud in the sky far and wide and so it was said in the early morning, the small rucksack luggage shouldered with necessary strengthening and on we go to the valley station. The flower and herbalist expert was already waiting for us at the mountain station, who designed such an interesting tour that we spontaneously decided to describe some of the new findings in a separate article. The short way to the summit cross showed 130 types of flowers, some of which were still in full bloom. 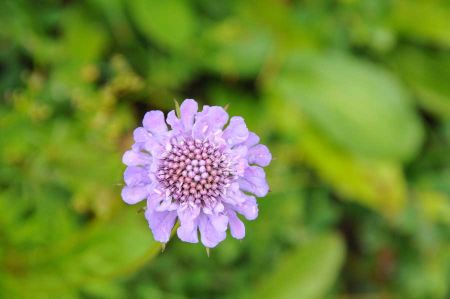 After the really interesting flower tour, we set out on our first hiking route. Since we are not beginners with regard to mountain hikes (our experience is based on extensive hikes through the Taurus Mountains), we were excited about the circular route we planned. In the picture gallery below you can also clearly understand the tour we completed, which took us from the Walmendingerhorn (Route 2, 1,996 meters) via the Ochsenhofer Köpf (Route 9, 1,850 meters), the Ochsenhofer Scharte, the Innerer Stierhof (Route 5, 1,680 Meters) and the Untere Lüchlealpe (Route 5/4, 1,571 meters) should lead down to Baad. Inexperienced hikers should take to heart the very important sentence from the tourism brochure: "You are in an alpine mountain region! The descents to the valley also require good physical condition and sturdy shoes (mountain boots)". 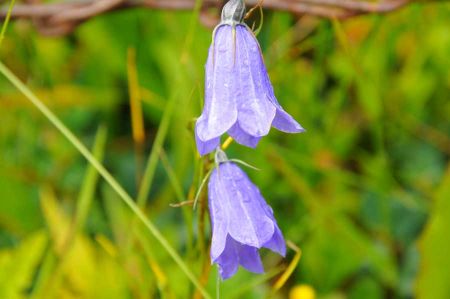 From the Walmendingerhorn it was first on the comfortable, albeit sometimes relatively steep route 2 down to just before the junction to the Oberer Lüchle Alpe, which is well known for its traditional cheese production. The fork up to the Ochsenhofer Köpf (Route 9) is well signposted, albeit a relatively steep uphill. The high alpine ridge path leads over paths with great views to the Ochsenhofer Scharte. Even the first summit is definitely worth the effort, as the panorama picture changes continuously while hiking. Be careful at the first ridge, it is too easy to slip. There were also tourists with children who were advised against. So the "father" had to take care of the first ridge passage, which looked very breakneck. Carelessness that can quickly lead to accidents. It is not for nothing that the tourist guide demands: "Surefootedness, a head for heights and sturdy shoes required". Here at the first summit we met two hikers who, having just finished their rest, wanted to get to the Grünhorn today, a summit following the Ochsenhofer Scharte, at an altitude of 2039 meters. 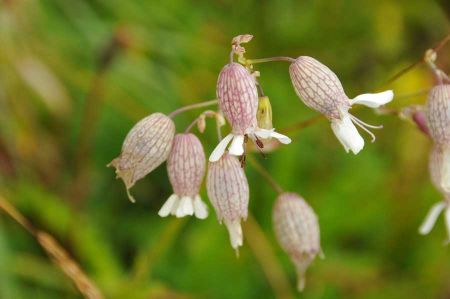 Shortly before the last summit of the Ochsenhofer Köpfe, the first clouds came in, which immediately noticeably reduced the temperature. Now, as a precaution, rain gear was announced and the route down into the Ochsenfurter Scharte was a bit slippery, but still easy to master thanks to good footwear. When we got a little deeper, the clouds in the valley quickly dissolved again, so that we could take our further photos in the sunshine. Route 5, which we are now taking, led over high alpine pastures and small streams down to the Inner Stierhof, which is a welcome rest stop at 1,680 meters. Just a little later we met a mountain bike rider who asked for the way to this hut. Basically, we found corresponding path markings everywhere, so that a wrong direction seemed almost impossible. From the mountain biker's point of view, the problem is a bit different. 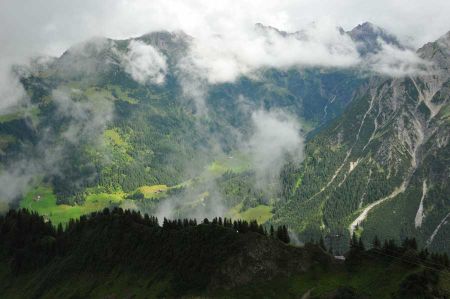 We reached the junction in the direction of Untere Lüchle Alpe, which now initially led through scrub and strips of dense mountain forest. The pictures of the root systems of the trees that stretch along the path are always impressive. In general, it can be seen that there is a lot of dead wood in the forest, an ecologically desired measure to restore the forest areas in a natural sense. In general, the ecology here in Kleinwalsertal is being promoted quite consistently, which is also clearly reflected in the care provided for residents and guests. Local products without expensive transport routes are preferred not only by ecologically motivated consumers. In general, the Kleinwalsertal is quite open to all areas of application of possibilities to relax body and mind.

Further down we came across large fields of blueberries, which every now and then invited to snack. Several times on the way we also crossed pastures that were surrounded by fences. Passages could be opened by hikers themselves but should also be closed again and again! At the Untere Lüchle Alpe we came across a collection of young cows, called Bester in North German, who were able to make big jumps on the steep slopes while playing. We were amazed at the mobility and safety of the animals with which these jumps were carried out. We spontaneously called them "Gemskühe der Lüchle Alpe".

The remaining path down to Baad led through a dense spruce forest and almost arrived in Baad, we met the two hikers from the Ochsenhofer Köpf again. Due to the dense clouds on the way to the Grünhorn, they had broken off their tour and had also returned to Baad.

According to the tourist description, the route described requires around 4 hours of walking. Due to the many photo interruptions, however, it almost took us 6 hours. 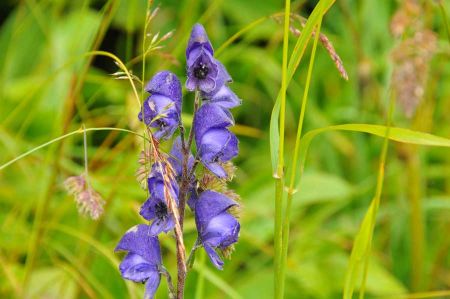