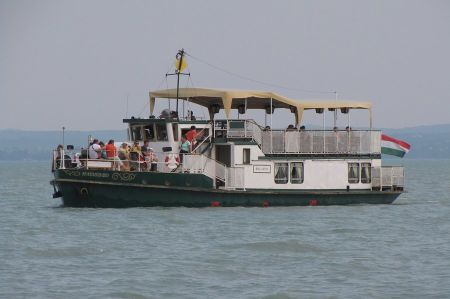 Lake Balaton is located in western Hungary as it is the largest inland lake in Europe and next to Lake Neusiedl in Burgenland also the most important steppe lake in Central Europe with a pronounced fauna and flora.

In the recent past, the Balaton was a well-known destination of Germans from East and West, as it was accessible to both sides. No wonder, then, that the annual holiday often served as a place of family reunification from East and West.

The Hungarian as well as the German name Balaton originates from the Slavic blatna, which means as much as marshy turf region. In Hungarian, the lake is colloquially also called "Hungarian Sea" (magyar tenger), or simply Balcsi. The beautiful beaches, the spas and the countless thermal springs around the lake have been attracting bathing tourists for years to swim but also to the pure use of thermal baths. In addition to the capital Budapest, Lake Balaton is Hungary's most important tourist center.

Balaton Lake - a paradies for water lovers and wine lovers 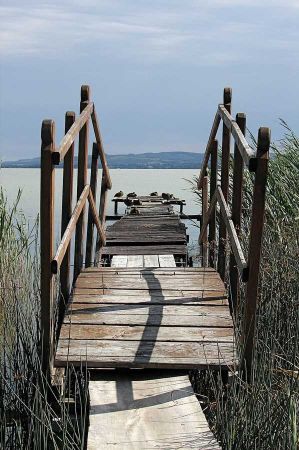 By the Tihany peninsula, the Balaton is constricted to 1.3 km in the second third of its west-eastern longitudinal extent. The average depth is only 3.25 m, the maximum depth 12.5 m. This shallow depth facilitates the warming of seawater, so the water temperature in summer can rise to more than 30° C. The south shore of the lake is flat, the north shore is lined by the vineyards of Badacsony and the foothills of the Bakony.

Winegrowing has a long tradition at Balaton - as well as in Hungary - that goes back more than 2,000 years to Roman times. In the 3rd century Marcus Aurelius Probus had extensive vine plantations. Later, Keszthely earned its ear for wine growing. György Festetics founded the first European agricultural faculty in 1797, today the Georgikon belongs to the University of Veszprém. When in the 19th century the production areas of Lake Balaton were hit by the phylloxera catastrophe, many vineyards came into the possession of city dwellers, who then had large mansions built on them.

Already at the end of the 18th century, bathing tourism developed at Lake Balaton, with the use from May until late autumn, whereby the south shore is particularly more suitable for this purpose. Here, the water is still less than a meter deep 200 to 300 meters from the shore. Due to the shallow depth, the water in the bank area can warm up quickly in the sunshine. The water of the lake is to be described as "silky" because it is weakly alkaline. The National Ministry of Environmental Protection and Water Management regularly check the water quality, even in the summer mostly all 14 days. Some beach resorts in the surrounding towns require access fees to use the beach, but most of the lakeside swimming areas are freely accessible (on maps and signs referred to as "Szabadstrand", Hungarian for "free beach"). 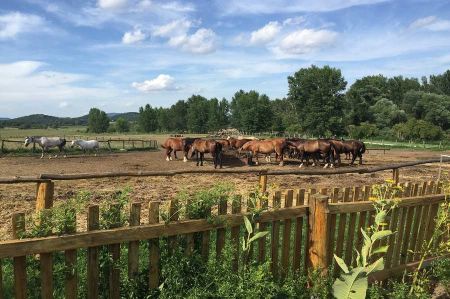 The river Zala feeding the Balaton, is with 138 kilometers length and an average outflow of seven cubic meters of water per second, even one of the smaller rivers of Hungary, however, the largest inflow to the Balaton. The Zala flows into the north, passing the Kis-Balaton, then to dull. On the one hand, the swamp zones and reef areas of the Kis-Balaton serve as a natural water filter and on the other hand harbor many rare plant, reptile and bird species. South of Keszthely the Zala enters, enriched with oxygen and purified from the wetland and flows a few hundred meters further east into the Lake Balaton.

Rivers and water dams at the Balaton

Apart from the Zala, the lake is fed by about 30 permanent and 20 periodic water courses. In order to regulate the water level of the lake, the Sió lock with weir system and lock chamber was built in Siófok. Excess water is channeled directly to the Danube via the Sió Canal east of Szekszárd. This channel was partly created in Roman times and is already mentioned in Pliny the Elder documents.

Around 1990, the cycle tourism came back to the lake. Bike paths have been renewed and new ones expand the existing network. Since 2004, there is the 200 km long loop around the lake (Balatoni Körút), and organized bike tours including bicycle and helmet rental offered in all major towns. Since most trains have wheel compartments and the ships are allowed to take them, day trips are possible.

Especially for cycling around Balaton we will do a separate article later. Also for campers the Balaton is a worthwhile destination, as there are numerous campsites, some near the shore. We will continue to report.