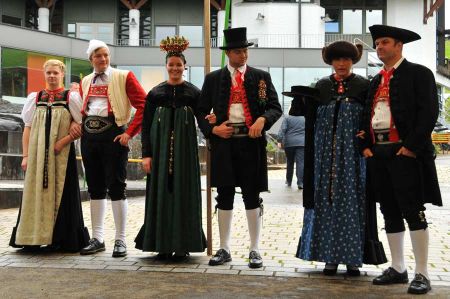 The day before we noticed the first activities of the local fire brigade, which were busy building a huge canopy next to the Walserhaus: the village festival was being prepared, the first stands were being set up.

Since an event to explain the Walser costume was announced in the supporting program, we wanted to be on site in good time, once more on the Walserbus, that was no problem.

Once on site, the typical music in the form of a brass band could be heard from afar. Our first interest, however, was the stand where homemade cakes and coffee were offered. Armed with a delicious piece of Walser cake and coffee, we took our seats among the visitors who were gathered on beer tent sets under the canopy. Unfortunately, there were occasional rain showers, which clouded the mood a little. A helping hand made sure with the help of a broom that the masses of water could run off on the canopy. Much to the amusement of the audience, because sometimes the gush of water from the roof hit the ground just next to the visitors.

After a few performances of traditional dances as well as live music from the hearty band, the big highlight of the festival, which we expected with great interest, was reached: The Walser costumes were presented and explained.

The costume of the Kleinwalsertaler is one of the most ancient in Vorarlberg. Unfortunately, it cannot be determined today when exactly this was created. What is certain, however, is that the “Walser hat” was worn daily by men until around 1870 and by women until 1890. At the turn of the century, the influence of modern clothing, “foreign and Schwabhäß”, became too great. The costume was seen less and less, until 1926 some Walser decided to tackle the revival. The wish was strengthened by the music bands, which soon appeared in their traditional costumes. A very large contribution to the preservation of the Walser costume has been made by the various groups in the valley. Since 1927, they have revived the entire costume industry with the folklore evenings listed.

We had already noticed some of the performers' faces in the dance group, which was now performing the traditional costumes under the moderation of their spokesperson. So it was explained to us that it was already recognizable from the costume whether it was a married or unmarried person. A very practical device that might be popular today as a model for modern times in dark discos. But now to the men first.

In their traditional costume, the young men wear black loafers, which can be decorated with buckles, white, almost knee-high stockings, plus black, tight breeches, richly embroidered suspenders, wide leather belts with embroidery, plus a white shirt and a silk scarf. The adult men wear a sleeveless red vest with silver buttons, a camisole, by which one understands a long skirt made of blue, formerly also dark or rust-brown cloth. The married man wears the three-cornered hat, a hat of a special design.

The boys and the single men wear black leather or cloth trousers with silver buttons, suspenders, a wide embroidered belt and a "Mäschle", a colorful scarf. A white shirt, white stockings and black buckled or waistband shoes are basic equipment.

The jacket is a white sheepskin doublet with red cloth sleeves. Headgear is a white, knitted pointed hat. The black wool hat, which can also be found, is only worn by the groom.

The most important item of clothing for women is the juppa, a black, pleated overskirt. The fabric is placed in small folds by hand - pleated. On the hem is the so-called “Bsetze”, which is a full cloth that keeps the folds taut and gives the costume something special; plus an underskirt, which is actually a whole undergarment. Roses are embroidered on the top (always visible). In addition, the woman wears the “Fürsches”, an apron that is possible in all muted colors, except white, and is smocked on the upper edge and decorated with pearls. The basic equipment includes a white blouse with short or long puff sleeves, black shoes and white stockings.

The most striking peculiarity of the Walser women's costume is that the “Fürsches” is held over the chest by the embroidered velvet ribbons. Due to the freedom of movement (the traditional costume was always everyday clothing as well) from the era of Empire fashion, women have adopted the higher waist, and even set it higher.

There are various hats and jackets to choose from for going to church and on festive occasions. The “Siidahuat” can be worn by single and married women. The “Sometkappa”, the fur cap made of otter skin, is only available to married women.

An extremely important piece of jewelry is the coral necklace, which was brought from the trading men for their wives. Brooches on the apron strings are also popular, additional pieces of jewelry, as is the “Bschlacht” belt over the chest made of patent leather with three filegran brooches of different sizes on the back. The girls wear the same basic outfit as the women: Juppa, petticoat, “Fürsches”, white blouse and coral necklace.

The Chranz, the crown, is worn on festive occasions. The “sleeves” (short jacket) or the “Schälkle” (jacket decorated with chenille) and the “Blaetteleschgürtl” are mandatory for this headgear.

A very interesting lecture, which gave at least a first insight into the traditional relationships between clothing in connection with the customs in the Kleinwalsertal. Preservation of these traditions not only for tourism but also for the preservation of cultural assets contribute to the self-image of the Walser ethnic group and thus also to self-confidence. This need not stand in the way of integration into the local population, which can be seen as a successful example. On the contrary, it contributes to the diversity and thus to the cultural richness of humanity.

We are already looking forward to the costumes and customs of the Sorbs in the region around Bautzen and Kamenz, who as an integrated ethnic group even understood how to receive their own anthem and flag in addition to their customs.

Diving at Blindsee in Tyrol - Austria