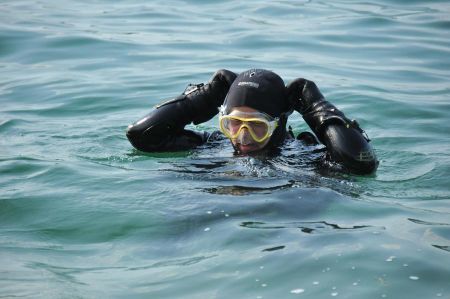 Not just because of the wonderful summer weather, the next diving expedition is planned to be a trip to the Blindsee, a mountain lake at 1093 meters above sea level, which is located below the Fernpass in Tyrol in Austria.

This time it is Sebastian and his friends Dominik, Daniel and Jenny who set off together on the early Saturday morning to the Blindsee. Coming from Augsburg, we first turn in the direction of Landsberg am Lech, Marktoberdorf, Füssen and Reutte on the well-known Fernpass road through the Lermoostunnel into Austria. Since the Blindsee is privately owned by a hotel from Lermoos, a stopover is necessary first for registration and approval of the planned dive. 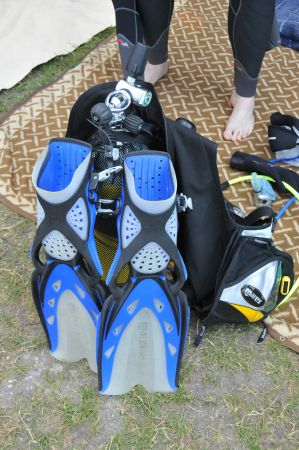 After completing the formalities, it goes back on the Fernpassstraße to the level of Pleiswald, where it is necessary to turn right onto the Bandsee toll road, which after a total of 151 kilometres from Augsburg leads directly to the parking lot at Blindsee.

With a depth of 25 meters, the lake itself is particularly suitable for diving because of its quite clear but very cold water. After the heavy snowfall in the winter of 1984, a large part of the slope on the north bank of the Blindsee slid down in February of that year, tearing trees and bushes with it.

At first, the demolition was spread over the thick layer of ice of the lake, which, however, could not bear the enormous weight of stones and earth and collapsed.

Above all, the subsequently sunken tree trunks in the clear water of the mountain lake created a scenario for divers that almost appears like a forest under water. 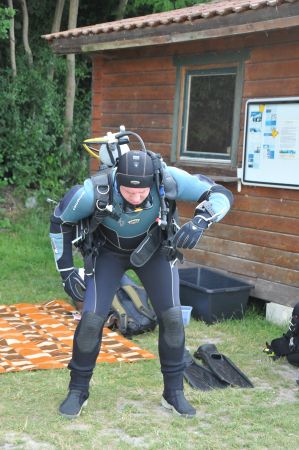 For those visitors to the Blindsee less interested in diving, the Fernpass itself is an interesting route, which, at the southern end of the lake, is continuously rising, and offers a wonderful view of the Zugspitze about 16 kilometres away, the highest mountain in Germany at 2,962 meters and the Wetterstein Mountains, too. In general, the lake and its surroundings are also highly recommended as a hiking or mountain bike area.

Our friends brought the towing car and trailer into a position at right angles to one another, because we want to stretch a tarpaulin to get a little shade. Despite the early hour, the sun is already beating down from the bright blue sky. Camping chairs are quickly set up and the equipment is well sorted and hung on the hanger planks. Since we don't want to lose any time in order to be able to do two dives today, we set out to put on the equipment. For diving in the mountain lake, we have chosen the 7 mm suits, which should prove to be quite useful despite the "hot" dressing phase on land. At 38 ° outside temperature, the water temperature on the surface was still 22 °, at a depth of 16 meters during our first dive it was only 8 ° Celsius. 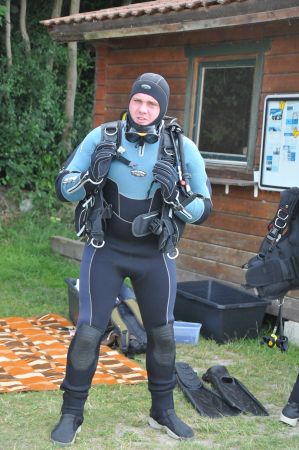 A few meters from the shore there is a hut in the water, which serves as an entrance for divers into the lake. There have long been some facilities in the Blindsee by divers for divers, as the lake is also used as a diving training location. For example, a circuit in the form of a triangle made of a kind of scaffolding has been set up under water, which are connected to each other by steel cables as diving points for the diving students in different water depths. For divers who are still inexperienced and who still have problems with orientation underwater, the ropes underwater are of great help. Various diving exercises can be carried out on the scaffolding platforms, which must be deepened in the courses.

Since we can already navigate quite well under water, we only use the first dive along the rope up to the first platform in about 6 meters water depth. From here we dive directly towards the mountain quarry and a little later we can dive through the underwater forest, which extends to a depth of 16 meters. After about 30 minutes we finished the first dive. 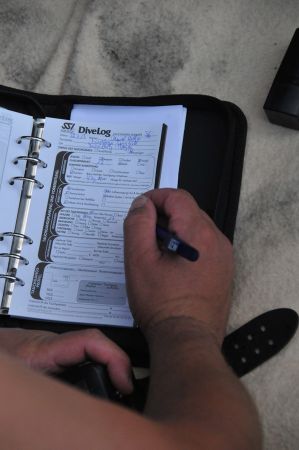 Back on land, today turns out to be one of the hottest days of the year and so we are glad that we have a shady spot under our tarpaulin, even if the air almost seems to stand still. It's quick to cool off in the lake, which also allows great bathing fun. A little later, the time has come to take care of the veal sausages that we brought with us, which are delicious.

Some heat thunderstorms have been announced for the afternoon and so we get ready for the second dive. To the left of the hut in the direction of the bridge there is also said to be an old tank that once fell from the bridge and is now a diving target. The way there seems too far to us, especially since we are a little worried about the rising clouds. This means that another dive is limited to about 30 more minutes. Our air supply is now also coming to an end, so that we agree to surface. It quickly becomes apparent that this decision was spot on, because you can already hear the first rumble of the approaching thunderstorm. The parking lot has also emptied quite a bit. Since the handles are in place, the diving equipment is also quickly stowed on the trailer. It is getting darker and darker and so we are glad that a little later all the equipment is stowed and we are sitting in the cars. A little later, the first thunderstorm pelts down on us. Good timing and a diving experience at Blindsee offer plenty of topics to talk about during the subsequent drive home. Return not excluded.